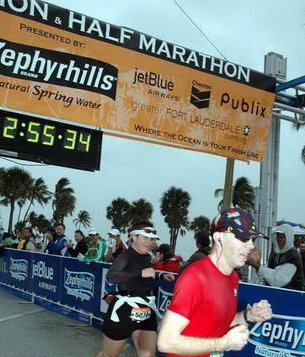 Yup, you saw that right, 2nd place overall. That’s the good news. The bad news is that I was actually in the lead for the first 25 miles.

The day started off great, dark and about 48 degrees. Perfect running weather for a guy from Michigan. The locals were shivering in the cold air. The half marathon and full marathon started at the same time (6 am) so I was not to concerned about the flurry of people in front of me at the start. I just got into my rhythm of about 6:15 pace, which is a little faster than I wanted to go. I met a woman at the start who was trying to Olympic qualifying time of 2:48. She looked like she could do it too. In the end, she did not qualify.

The course was gorgeous, running almost the whole way along the beach. We started the race heading west towards the ocean, and as we crossed a bridge, the yellow orange horizon of the sun was just coming up. It was beautiful. The sunrise 20 minutes later was awesome.

The two races follow the same course until about mile 6.5 when the half marathoners turn left and the marathon runners turn right. As I came around the corner I saw the big sign with the arrow for marathon runners to turn right, so I changed lanes and started my turn. There was a crowd of people there who all started moving when I came around. Two police officers on motorcycles took off, a race official on a bike gets going and a Harley starts driving besides me with a cameraman on the back filming me the whole way. I was like ‘cool’. And I ask the dude on the bike “how many people are in front of me”. He says ‘Nobody, they were all half marathoners’. I told him to stop lying to me and tell me how many runners there were in front of me. He said he was serious, I had the lead in the marathon and he could not see the second place runner.

This is about where I started to freak out. I was in a comfortable run grove, but I have never led a race, let alone win one, so I got nervous. I decided to just stay in my rhythm and never look back to see if the 2nd guy was gaining on me. For the first time in my life I had lots of people cheering ME on, and I knew it was just for me, because I was in the LEAD and there was nobody else around me. After the half way point, when I started seeing the other marathoners coming towards me, they were cheering. That’s why I am used to doing, cheering on the leaders as I run behind them. It was weird.

I took the half marathon turn at under 1:20:00 which (had I stopped there) would have broken my personal best for a half marathon by almost 5 minutes (I felt good!) and still no one in sight behind me.

At about mile 15, a light rain came out of nowhere, but then turned into an absolute downpour for about 5 minutes. Cold windy and now rainy. Awful conditions. The good news was that it lasted for only 5 minutes, but the bad news is that in that 5 miles, my shoes got soaked and I was running on bricks the rest of the race.
At about mile 17 or so, I actually started to see things. Strange concentric circles began to permeate my vision. That was just the start of what ended up being hallucinations. After the fact I realized I just did not drink enough (having just a little water at each station) so I got dehydrated. During the race I couldn’t think enough to say to myself ‘oh, I need to drink more’. That was the one big thing I learned on this day. I shall never forget it, because it cost me my goal of 2:50 and the win, the latter I never expected. At about mile 20, I lost feeling in my hands, and at mile 23, I lost feeling in my feet. In mile 24 my brain started to go fuzzy. Yeah, it was that bad.

I used my bike escort (who was with me the whole way starting at mile 6.5) to my advantage. He would go ahead of me at each water stop and tell them to only hold out water, far from my body (so it wouldn’t spill on me). I also had him stop at mile 20 and start a stopwatch and find out exactly how much of a lead (in time) I had on second place. I was starting to fail, and I wanted to know how much of a buffer I had. It was 3 minutes with 6 miles to go. That helped a little, but I knew he could catch me if I slowed down any more, which I did. I averaged 6:10 miles for the first half marathon, but lost all that, finishing with a 6:42 average pace. I have almost no memory of miles 22-26, as I was trying to keep going, wanting to stop and pass out. I tried so hard just to stay alive and keep putting one foot in front of the other. Right around mile 25, I lost the lead. Again, a lead I never thought I should have had. I did not fight it, for I had nothing left.

When I crossed the finish line, I had three people come grab me because they could tell I was about to fall over and go night-night. They sat me down, gave me fluids and food. I did not stand up for almost an hour. At one point one of the medical personnel was telling me they were about to take me to the hospital. I assured them I was recovering, just slowly. I downed 5 bottles of fluid (4 fluid replacement drinks, 1 water) and ate a muffin, a bagel and 4 (really good!) cookies. I also got interviewed by the local newspapers and television station. I didn’t get as much copy as the guy who won it, but I at least got my name mentioned, and not just in the results section. THAT was cool.

I would like to run this race again, not just because I almost won it, but because the course was so beautiful. That is reason enough to do it again. Don’t think that I almost won it because I am really fast. It was a slow field of racers, truly. A winning time of 2:54:30 is not that fast. I know I could have done better, and now I know I am a legit marathon runner. Time to start training for my next marathon.
Next marathon on deck? Boston. Yeah baby!
Posted by Doc Ott at 10:01 AM No comments: