A new marathon PR! Time for a new tattoo!
Ok, so I now run about a marathon a month with the potential of running 15 total this calendar year. In the last 4 weeks kind of a lot has happened. I won a marathon, I get a feature article written about me in my local paper, and a set a new PR by a full 5:32. Not bad. Not bad at all.

The day did not start out very nice. When I first went out to my car at 5 am, there was a light rain coming down. When I checked the forecast a few days earlier, the chance of rain was supposed to drop off to 30% by race start. I crossed my fingers, but stopped at the local grocery store anyways to pick up a box of large garbage bags. On marathon mornings, they make great disposable ponchos. Lots of people had those, but I was the only person I saw who also had small plastic grocery bags over my shoes. I have learned from previous marathons that wet shoes are a horrible thing when racing. I wanted to prevent them from getting wet as long as possible. A quick bus ride to the start from the finish had me waiting a little over an hour for the race to begin. I sat there, in light rain, just trying to keep warm with the temperature being right around 50. The rain ceased only 5 minutes before the start.

The race was large enough and brought in enough ‘big guns’ that there were seeded runners. I ‘qualified’ for spot 51 (my bib number) which made me feel kind of special, I have to say. 60 seconds before the race started, I tried to turn on my MP3 player. I thought it was charged but I must have accidently turned it on sometime during my road trip because I got a ‘dead battery’ symbol. Thanx, great. No music. Wet, cold, and now no music. Blah.

With the gun going off I had plenty of people in front of me, most of who, I found out later, were running the half marathon. In the first few miles I was asking runners around me what pace they were shooting for. 2:45, 2:50 were the kinds of numbers I was hearing. I tried to go slow, really, but my 1st mile split of 6:07 confirmed I was going way too fast. I slowed down and tried to get into some rhythm. I wanted to run strong, and I would have been happy just to break 3 hours (my standard ‘goal’ of any marathon nowadays) so I tried to slow down. I hummed along for a while and at about mile 8, I looked ahead and saw a big sign for the entrance to Churchill Downs, you know, where the Kentucky Derby is run the first Saturday of May. In we went, under the tunnel and onto the infield. That was pretty darn cool. Audio from previous horse races was piped in to motivate us (I guess) and we ran around for about a mile and then back under the track and out back onto the road.

As I emerged from the tunnel, there about 20 m in front of me was one woman who told me in mile 1 that she was gunning for a 2:45. She had met up with a training partner of hers (almost exactly the same outfit, both Russian woman by birth guessing from their accents and names) and they were clipping along in good stride. I am not an elite runner, so I cannot necessarily (on my own) keep a good steady pace when going this fast. But THESE ladies were elites. Professionals. People who know how to keep a steady pace. I caught up with them and parked myself a half step behind them. I got comfortable, stopped paying real close attention to my watch and just tried to hold on with them as long as I could. Around corners, in and out of parks, up and down hills, the miles we pounded away. Mile after mile and I just felt great. I was wondering how long I was going to be able to hang with them. At mile 19, one of them dropped the hammer and decided she wanted to leave us behind. She surged ahead and her partner picked it up as well, and I decided I was still on pace to get a PR, so I let them go. I was still feeling good and solid, and just hoped I could do it on my own from here. I wanted to thank them at the end for pacing me for the middle 10 miles of the race, but I never saw them again. 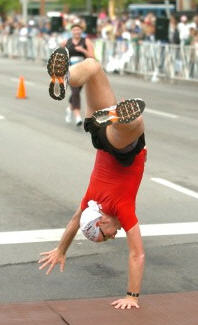 As I reached mile 20, I started my mantra, ‘keep this pace and you’ll get a PR, keep this pace and you’ll get a PR’. With each mile I thought I would slow, but I didn’t seem to that much. Every time I saw a mile marker clock I did a quick mental calculation of how slow I could run the rest of the race and still get a PR. First it was 7 flat, then 7:30. When it got over 8 minutes per mile (as slow as I can go without feeling like walking) I knew I could do it. 2:50 seemed just out of my reach, so I just tried to finish strong, just putting one foot in front of the other. When I made the last turn, meandering through thousands (it seemed) of half marathoners just finishing I saw the race clock. I had a chance. I pumped my arms and sprinted (as best I could) getting in just under 2:50. The landing of my handstand was less than graceful, but hey, I got a PR.

Since it was such a huge race (>1200 marathoners, >9375 half marathoners) the post race operation ran like a well oiled machine. Food, lots of food, cool finishers medal, space blanket, and a free beer. The unexciting expo (I was in and out in <30 min, not stopping at ANY of the booths there) was made up for by the finish line festivities.

So in addition to my new original training schedule, I now have a pre-race ‘ritual’ that seems to work rather well, if you believe the results of my last two marathons. In brief:
1.The night before go out for a big dinner. Eat until full, then eat some more. Your stomach should ‘hurt’ from being too full.
2.Wake up 2.5-3 hours before race start, have two cups of caffeinated tea (no coffee) and a peanut butter sandwich, heavy on the peanut butter.
3. Take 4 ibuprofen tablets 30 minutes before the race chasing it with 16 oz of Gatorade 15 minutes before race start.
4. Immediately upon finish, walk for a while (20 min?) to get all that crap out of your muscles. Your legs will not be nearly as sore as they would if you just sit down right afterwards. Do NOT simply sit down and rest. You will be hurting.
5. Do not eat too fast afterward and avoid bagels like the plague, as they give awful gut-rot that CAN hurt pretty bad.
Posted by Doc Ott at 10:59 AM No comments: