Idaho, what a beautiful place to visit. So nice that I have thought many times of retiring here. It has the beauty of the mountainous west, with vast stretches of openness dotted with large hills and mountains. A little more water and a little more civilization nearby and this would be a perfect place to live out my life.

This race would be memorable for many reasons, but the first was the race check-in the night before. Even though a good size race (over 1000 runners for all races including 350 marathoners) there was no expo at all, just one room with check in stations for each race. In addition to a nice long sleeve technical shirt, we all received a high quality backpack and a bag of potatoes. Seriously. I love it when races try to be unique in their racer loot. I was glad to have packed light so I could bring the bag the bag of potatoes home with me. 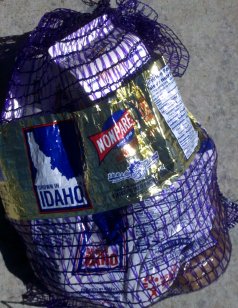 A point to point race requiring busing to the start line and a race start of 6:15 am meant I was up at 4 am to start the ritual. Ugh. My good friend Gary got into the Pocatello area at 4am after arriving in SLC after midnight. I saw him for about 5 min before the race start, just enough time to hear about what food (if you want to call it food) he ate in the last few hours along with his 1 hour of sleep. He did just fine (kicked my butt, as usual) anyways. Must be nice doing this marathoning thing when you are young.
I have been dealing with an ankle issue for a few months now.

Originally I thought it was just another case of shin splints, but it turns out it might be something more like tendonitis of the lower calf muscle in my right leg. After my Alaska marathon 3 weeks ago I had a hard time walking, it hurt so bad. I spend the next week resting and icing it, only working out on my elliptical machine (getting caught up on my TV shows) until it felt pretty good. I went for a 10 miler with the cross country team and 5 miles out I felt fine, then we took the turn to come back and it starting feeling a little rough. By mile 8 it was really hurting and had a serious problem. By the end of the run I could barely walk. No more runs then before this race, just more elliptical work. It had felt fine for days, but I was still very concerned when I finally toed the line, hoping for the best but preparing for the worst.

The first 10 miles of this race were actually downhill (net drop for the whole race is ~1500’) which you would think would be great, well not for my ankle. At mile 3 I started getting those same pains I had at mile 5 of my last run. My mind went wild with panic. Will I break 4 hours? Will I finish before the cutoff (6 hours)? Will I DNF? I am running 4 marathons in the span of 8 days in early October, will I be able to recover before then? Is my entire quest now in jeopardy? Will I be able to run my 100 miler in February? Am I totally washed up? Yeah, it was that bad. Freaking out like that at mile 5 of a 26.2 mile race is never a good thing. To try to survive, I slowed down and run as gentle as possible. To ease the impact on my ankle I even ran several short sections of the early race backwards. Being so steep, I was essentially only on my toes which gave my ankles a short break which helped a little. What helped more was just trying to keep my form as gentle as possible, with my right foot seemingly never going higher than about 2 inches off the ground. I feared that intense pain that I felt 2 weeks ago would return. My ankle protested the entire way after mile 3, but never got worse. The Vicodin I took right before race start might have helped a little, I’m not sure 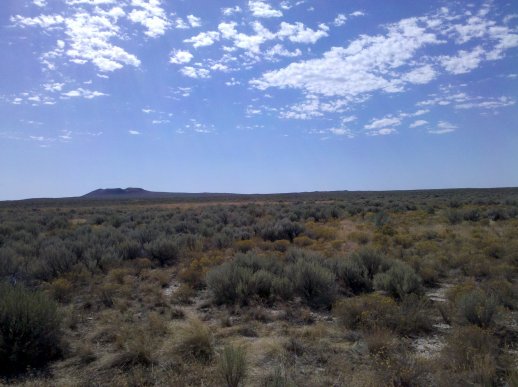 At about mile 16, I was caught by a guy running barefoot. He had a pair of Vibram 5 fingers he was carrying and he was putting off their use as long as possible. He was struggling a little bit and so I decided to run with him to keep him motivated and focused. He was hurting pretty bad especially the last few miles but I tried to keep his mind off it. We slowed way down in the last 4 miles or so, and I had hoped we could easily cruise into a sub 3:45 time. With about 800m to go I knew he wouldn’t make it and I had to take off into a full sprint just to get under 3:45 myself. It’s all about the points, ya know.

The post race food spread was one of the best I have ever seen. Pulled pork sandwiches, ice cream bars, chocolate milk, bagels, fruit, etc. Quite nice for such a small race. I only stuck around for a little bit because I had a long day planned for after the race and I was already running late. Gary had already taken off as he had to catch his flight early that afternoon out of SLC. I was not leaving the area until the next morning, so I decided to (even though Grand Teton was close by) to go the heart of Idaho because I had never been there. I figure I should try to do SOME touristing here since I dropped the dime to get here. Growing up, I visited parks and places all over the United States, but never Craters of the Moon National Monument, just a few hours northwest of Pocatello. It really was cool, and it really did look like the surface of the moon, or like Hawaii with its volcanic rock. Even though the rocks were more than 2500 years old, there was little vegetation. I took the tour of the lava tubes and caves and tried to work on my deathly fear of confined spaces and made little progress on that. Oh well. On the way back to SLC I stopped as took a tour of one of the neatest places I have ever been to, the EBR-1 lab. It was the first nuclear power plant on the planet. It was the first nuclear reactor built for generating power via a nuclear reaction back in the 1950’s. Though never connected to the grid (so never powered a town) it was still a significant place. It was one of 57 nuclear power facilities on the Idaho National Laboratory land, but most of them are gone. This one still stands (and is maintained completely with tour guides) because it had been designated as a national landmark. For someone like me who enjoys reading and learning about the history of nuclear energy, this was totally awesome.

All in all, it was a pleasant trip. A horrible race, followed by some cool touring of the area. Pleasant memories.
Posted by Doc Ott at 3:53 PM No comments: