2011 Oktoberfest Marathon Results (Or: Where Did This Speed Come From?)

Last week I ran under horrible conditions including rain and mud in a slow trail race. This week was the stark opposite with beautiful weather and a fast course. The result is the fastest marathon I have run in the last 2 years in what my Mother would call ‘quintessential Americana’ town/event.

4am wake up call for the 2 hour drive to the thriving metropolis of Spring Lake, MI which is a beautiful little town on the shores of Lake Michigan. We got to run by the lake a few times, which when I saw it reminded me a whole lot of my Rhode Island race a few years ago. Those houses of course are 10-20 times as expensive. Someone told me the land lots (no house) go for about a million. Yikes. It’s a nice view, but not that nice…

An 8am race start meant the sun was up with temps ~50 degrees, 7-10 mph winds, and overcast so the conditions were pretty much perfect. The race horn went off and the (eventual) winner took off like a rocket (2:44 winning time) and I ran a little ways with Rich P, a friend whom I have lost to more than once, (he ran a 2:47 this day) and I got into a quick (6:45/mil) steady rhythm with the eventual 4th place finisher. We ran together about 10 miles talking about standard stuff. He is an accountant in the Detroit area and this was his 16th marathon. I pulled away from him for a little while, then he caught me. At about mile 23 I was only 5 seconds back from him, but eventually just let him go. What was I trying to prove? Exactly. :) 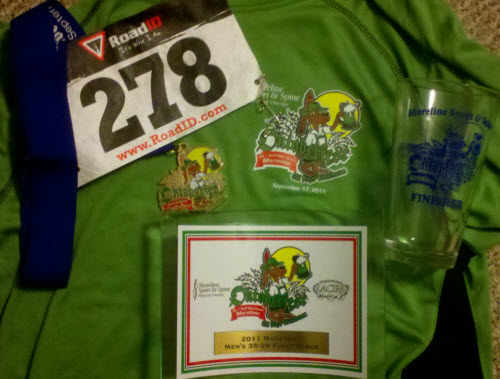 At about mile 8, a marathon newbie caught up to us. He told us that he had not even run a half marathon before today. We told him good luck as he took off. When he was reaching the range of my voice, I called up to him asking him what his longest run before today was. He said he had done one 20 miler. I said I was asking because I was curious when (and if) he would crash so I could catch him. His response was simply ‘good luck!’. Heh heh. Yeah, we caught him at about mile 20 from cramping. He ended up crossing the finish line about 20 minutes after we did. Rookies…

For most of the race, me and my group (3-4 of us most of the race) had a bicycle escort. There was another guy guiding the leaders and we had ours just to help with turns and such as the course was in and out of a lot of residential areas. The course was reasonably well marked, but having a bicycle guide was nice. Cool guy, talked with us and even offered us supplemental water in between aid stations which was just plain nice.
When I finished in an average pace ~7 min, I was quite surprised. Like I said earlier, I have not a marathon this fast is a while. It did take some effort, but not a tremendous amount. Because I did it at such a clip, my legs were actually LESS sore than recent other long races. I am not saying I am gonna bust my ass in the next road race, but maybe I will push it a little. I enjoy racing so often for several reasons, and one is because then I can run on feel, meaning when I want to go fast, I can. 3:05 for me (these days!) is defined as fast. I could have broken 3, but I didn’t want to work THAT hard…

The finish was pretty cool. The major sponsor was a local brewery/restaurant, so we got a nice finishers glass, quality shirt, tasty (and free!) lunch, cheap and delish beer and a cool age award. Yet another small town race oozing with love and affection for the runners. I would rather run these size races than some 5000+ runner race any time.
Posted by Doc Ott at 1:44 PM No comments:

2011 Mellow Marathon Results (Or: This Race Is Muddy)

This would be my 5th career marathon win and first since March, 2009. What is interesting is that those two races were very similar. Both had horrible conditions (obviously, did you see my winning time?) That race in Ruston, LA was on hard packed mountain bike trail but it had rained for 4 days before the race so it was very slippery, but not so muddy. For this race, it had only rained the previous night, but this was on running trails, so the mud was slippery and thick (several inches) in lots of places.

After a nice nights sleep in my own bed (I love not travelling for marathons!) I got up at 5am and took off for the 1 hour drive to Pinckney Recreation Area near Hell, MI. My good friend, Ryan and his wife had been there most of the night pacing some of the ultra runners. They told me the course was horribly muddy and they were right. Within a mile, we were slipping and sliding on 2-5 inches of mud. The trail is very narrow so in most places, so you couldn’t just run on the side avoiding the mud. The rain that came during 75% of the race was not helping either. I can run in any conditions, but I really don’t like running with my feet wet. Some of the half marathoners were running full speed into the middle of the mud while I was being dainty on the edges. That was until a few of them fell. Hard. Then they wised up. Ahh, experience…. 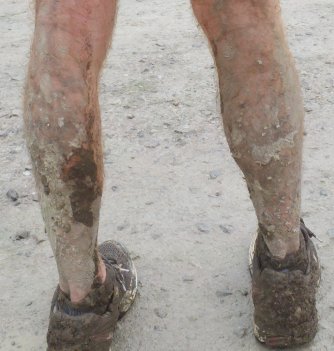 At about mile 4 there is a long out and back spur so I knew I was in second place in the full marathon with about 6 half marathoners also in front of me. I had no real dreams of the win, I just wanted to try to enjoy my day and have it not suck, which today meant not becoming miserable or getting lost like my last race. Luckily, the course was very well marked, so that part was fine.

At about mile 11 into the race, a halfer and I who were running together passed the marathon leader. I asked him how he felt and he said ‘pretty good’. He was (obviously) a newbie to marathons and had just gone out too fast. Once I reached the halfway point, I knew I would be alone for most of the rest of the race, which was true except for the other distances racers I was passing as the courses overlapped quite a bit. I felt really good, and I was re-running the same loop again and knowing exactly what to expect helped.

When I got to that same out and back spur, I checked my watch and I realized had a full 4 minute lead on the second place guy (not the original leader, by the way) but I felt strong. With my ultra experience and endurance, I knew even at that point, that I was going to finish strong. I slowed the back half of the race (always do) but never blew up (sometimes do). I just kept repeating the mantra ‘don’t blow up and you get the win’.

As I was coming back to the start/finish the marshals saw my bib and wanted me to head back out again (a 3rd 13.1 mile loop) and I told them, no, I was finishing. I crossed the finish line and there was nothing. Two more people asked me if I did the loop 2 times. I know there a bunch of other races, but can I get just a smidgen of joy, a half hearted handclap? 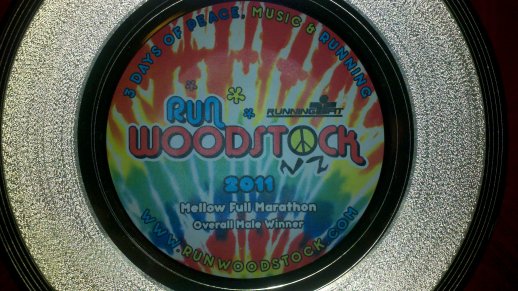 I wanted to head home, so I walked up to the awards table and asked them how long they thought it would take until my win was official so I could get my award. They asked me “Did you do two loops?” so I showed them my GPS watch and said “well, my watch did!”. I guess they were not expecting me so soon based on the horrible conditions (second place was over 4 hours). After a few back and forth iterations of the officials, I finally got my ‘gold record’ award and I was on my way. The trophy was totally cool looking, I think the coolest award I have received,. I was later telling SJ about it, and she asked if it would play. Upon inspection, it looks like there is real audio recorded on it. I think I need a record player
Posted by Doc Ott at 1:46 PM No comments: