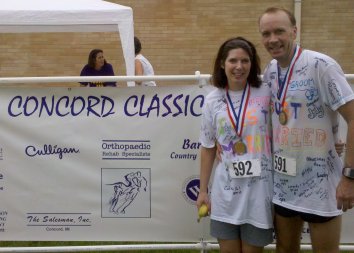 Ok, this race report is less for the race itself, and much more about the symbolism of the race. Ya see, approximately 26 hours before race start, I got married.

Mistique and I started dating back in April of 2009. Our first date was a race in Flushing, MI where I did the half marathon and Misty did the 5K walk. Since then we have done a few more such events, me doing one of the runs, her the walk. We had decided long ago to have our wedding on June 25, 2010 but only a month before I mentioned to her that there was a local race the next day. She was totally OK with it, so we signed up.

The wedding itself was at 6am Friday with just immediate family. The ceremony was only 4.5 min long, and the sunrise and weather were absolutely perfect. The reception was at the house that afternoon. So our race eve dinner was our wedding reception, so the food was really good. By 9:30 we had cleaned up and sent everyone away to start our honeymoon. A 6am wakeup is not was most people get the day after their wedding, but hey, we were trying to be different and we had a race to get to.

At the reception, we had t-shirts that said ‘Just Married’ on them and we asked people to sign them. It was these shirts that we wore during the race. Having had a few beers the night before and little sleep the week before the race, I was totally surprised I crossed the 1 mile mark in 5:40. I managed to hang on to that pace for another 1000m, and then I started to slow. I was tickled with my sub 19 min finish. 3rd place in my age group got me a nice engraved glass cup. 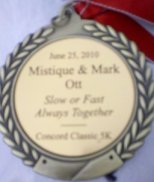 Without my knowledge, Misty had contacted the race director and asked them to specially engrave a set of finishers medals for us. He found me right after I finished and showed me the medals and told me we would get them when my wife finished. As with other races I do with her, I ran the course backwards as a cool down until I met up with her and then walked with her until the finish. As promised, the race director made an announcement about us to all there and gave us our medals. We were then interviewed by the local paper, the resulting story given below. I consider this our official wedding announcement since we didn’t formally send anything to the paper. The race was an awesome end to the wedding festiovites and start to our honeymoon.

Here is to many more such races and a long and happy life together! I love you Mistique!!
Posted by Doc Ott at 4:04 PM No comments: