2008 ING Miami Marathon Results (Or: The Birth of a Tradition)

I love south Florida, especially in late January when it is mid 60’s with low humidity. It’s way better than Michigan with its mid 20’s with high winds. Ugh. 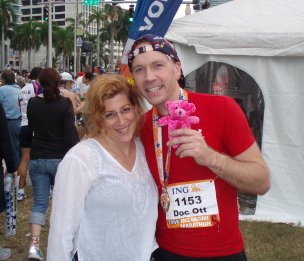 So I came down a few days early to visit my girlfriend, Stef, and we headed down to Miami the afternoon before the race. With race start being in downtown at 6:15 am, we thought it better to stay in a hotel on the beach the night before. A nice walk down the beach to the expo yielded my bib number and the standard race expo fare. My clothing collection being what it is and me running a marathon once a month, and hence lots of expos, I didn’t buy much more than some Clif Shot bloks, my running food of choice.

Race morning started early, getting up at 3:30. A quick shower, 2 cups of green tea, a banana and a peanut butter sandwich and off I went headed for the start line at about 4:30. A short drive, into the parking ramp at 5:05, and a short walk to the start line, arriving there at 5:20. I learned from my Vegas race that when running ‘large’ races, you get to the start line earlier than is comfortable. 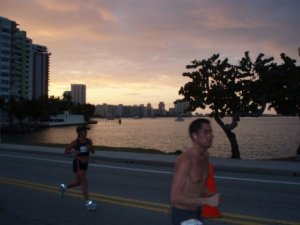 This race was my last long run ‘workout’ before my PR attempt at the A1A marathon in 3 weeks. I have been training the last month or so, getting speed work in, tempo runs, all feeling solid. With my good finish last year at A1A, I wanted to shoot for another PR on the same course. Because this was a training run, I decided to run a 3:15, which is not real fast, but not so slow it would harm me. Just a good solid easy long run, really. With the battery on my GPS watch flatlined (argh) I had to rely on the mile marker clocks and a 3:15 pace band on my arm. I never ventured more than ~15 seconds away from the 3:15 marathon pace after mile 3. That is what is called consistency, baby. 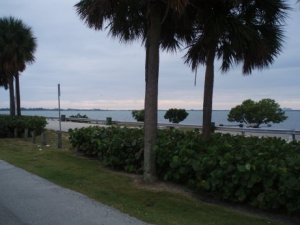 A beautiful course, with sunrise coming up as we ran along Ocean Boulevard. With the sky being cloudy and ~200 m of trees and green space between us and the ocean, the view wasn’t all that great. I had my camera with me and tried to take cool ‘scenic’ pictures, but unfortunately during the race there wasn’t that much scenic.

Because I wasn’t racing, I could stop and take pics including three people from my home state of Wisconsin (complete with cheddar heads) cheering on people. One nice old lady was trying to give people flowers (nice daisies) at about mile 6 and I decided to grab one and put it in my hat. One nice thing about big races is you get lots of people on the streets cheering you on. It was fun.

At the end of the race, I decided I wanted to enjoy the moment. Stephanie was in a set of bleachers at the finish line. Because I had my phone we had been talking and texting during the race (I also talked with my daughter and parents while running) I knew exactly where she was as I approached the finish line. She had 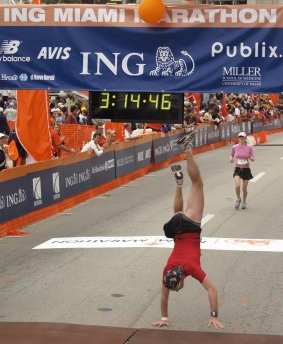 her phone and was trying to get my picture so I stopped and stretched my arms out wide. I just stopped right there about 50 m from the finish and was waiting for her. I then realized that there were hundreds of other people there cheering me on. I used the opportunity to play to the crowd waving my arms like a defensive football player on 3rd down at a home game. I then ran to the finish and attempted to go across the finish line walking on my hands. It was very much a last minute idea and it didn’t work to well. It did get me a talk with a reporter from a major Miami newspaper but alas, he did not publish my story.

Afterward I felt exactly the way I wanted to, just a little sore and ready for my next big race. This is the official start of my three week taper. Something I have never done legit. I have tried various tapers, but they always involve too much running, by my own mistake. I have to accept that nothing I do in the next 3 weeks can help me, but there is a lot in the next 3 weeks I can do that will hurt me.
A1A. 3 weeks. PR attempt. Fingers crossed.
Posted by Doc Ott at 10:26 AM No comments: