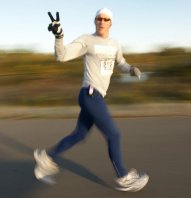 So in 35 marathons, I have never been able to sleep in my own bed the night before, until this one. The Falling Waters Trail is a 10+ mile rail-to-trail project that just got paved about 3 years ago. I ran on it even before it was paved (and I was breaking the law) doing 20 milers (out and back the entire length) on it. This was the first running of a marathon on it as a fundraiser. I gave money to the organization when they were getting initial funding, so I was glad to cough up the high registration cost for a great cause. Many of my friends said it would be an awful race because the view would never change. I personally love the trail because of the beautiful (non-changing, heavy woods on both sides most of the way, with the occasional wetland or lake) views. I sometime do this trail with my daughter or Mistique, them bike riding, me running. I love it. Even though the course was an out-back-out-back (6.5 mile course length) I was not bored with it at all. Nothing like that other similar out-back-out-back race where my watch busted <1 min into the race. Oh, that race sucked.

It being the first running, the same day as the Chicago marathon, and one week before Grand Rapids and Detroit marathons, I was fairly sure this would be a low turnout race, and it was with ~30 runners. I am at the end of a 2 week long sickness, but the last week I felt OK, eating and resting as much as possible. I had dreams of actually winning until right before race start when I met a guy who was going to shoot for 2:50, which for those of you paying attention is my all time PR, something I knew I was not running this day. Oh well…

It is early October, yes, but a little cold. I mean really cold. The race start temp was a balmy 30 degrees. That is (I think) the coldest marathon race start, but not near my record for coldest race. Those would be these in January and February. One long sleeve shirt (race shirt from Run with Horses. Nice shirt actually) running pants, cheapo gloves and a tight running hat and I was fine all day, not too cold or too hot. The sky was mostly clear so the sun coming up in the trails trees was (as always) a beautiful sight to behold.

I have been the JCC Cross Country team assistant coach for 4 years now and I have been cheering them on all that time, so it was time for payback. The team was volunteering at two of the aid stations and I expected to get some good cheers out of them, and they did a fairly crappy job. They owe me big time :).

Race start had me out and in the lead. At mile 1, the eventual winner caught me and I refused to look at my watch. I stayed right behind him until mile 2 when I looked at my watch. 6:32/mile pace. Wowa! Way faster than I wanted to go out, so I let him go. I was fairly sure I could not hold that. Well, after 6 miles I was still doing 6:36. After 12 miles, I was doing 6:36. As I approached the last turn-around (at mile 19.5ish) I saw the leader coming towards me. Some quick watch action and math put him at just over 6 minutes ahead of me. Not thinking he was going to crash that bad, I relaxed a little as I later figured out I had ~15 minutes on the third place guy. My place firmly ensconced, I decided to just finish strong, hoping I could hold it together to break 3 hours, my ultimate goal for the day anyways.

At about mile 21+ a familiar face showed up, Michael Olds. A former student, former JCC cross country runner and friend who now goes to and runs Cross Country for Spring Arbor University. He needed a run for the day, and kind him, he decided to run with me for most of the final miles. He knew his role, just talking about anything except the fact that I had been on my feet for well over 2 hours moving at a good clip. Thanks Mikey for helping me get through the end!

4 familiar faces greeted me at the finish, Misty and the three kids. That was very pleasant, their smiles and congratulations very welcome. I took them all out to dinner thank them for coming out. Poor Misty had to put up with all three kids this morning as I left the house at about 7 am this morning. She is so kind and deserves more than dinner…

I know it was the organizations first try at a marathon, and they did an alright job, seriously. My only real complaint is that the guy who won got an entire goodie bag full of stuff including a trophy and a coupon for news shoes for his winning. The 2nd place finisher (me) got exactly the same thing that the last finisher got, a grade-A lame finishers medal. It was a generic ‘runner’s’ medal with a sticker on the back that says ‘Wild Life Marathon 2009’. Wow. Not.

So what did I get from this marathon besides an October 2009 marathon, a chance to sleep in my own bed the night before and a chance to support the trail that I love to run upon? Nothing, but I guess that is enough.
Posted by Doc Ott at 1:59 PM No comments: