The 50 state quest is coming to a close, and I needed to re-run Virginia, so I could complete 50 sub 4 at the same time I complete 50 states. The Yuenling Shamrock marathon seemed a perfect fit. Beautiful course, great support, and only a 13 hour drive away. 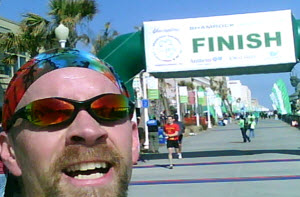 This race was really well executed with great support and an awesome post race party. There was only one problem, and that problem cost me $50. There was no race day packet pickup (which is fine) but the cut off for getting your packet the night before the race was 5pm, a horribly early time for those of us who are traveling great distances to get to the race. Because it was a 13 hour drive, I had to leave Michigan on Friday night and get a little ways down the road to make sure I was in Virginia Beach by 5pm Saturday. A quick stop on priceline.com and I found a cheap hotel right of the Ohio turnpike in a little town called Streetsboro. The funny thing is not only was the hotel the same one I stayed in right after the Burning River 100 last July, but the room I stayed in this time was 2 doors away from the previous stay. That was weird. Going up those stairs brought back painful memories…

I woke up early Saturday as was heading ESE by 6am, arriving at the expo about 3pm. Generally I get almost nothing at expos, but there were some good deals. My ‘shoe’ was here and on sale, so I bought 2 pairs. I also (finally?) picked up a high end handheld water bottle. Since I knew I would have little time to enjoy the beach after the race, I wandered the boardwalk for a little while. Right near the huge statue of Neptune, was a restaurant named Salacia. For those of you who didn’t know, my daughter is named after that roman goddess who was one of Neptune’s many wives. I would bet <1% of the people who eat there know the origin of the name of the place, but I thought it was beyond cute. 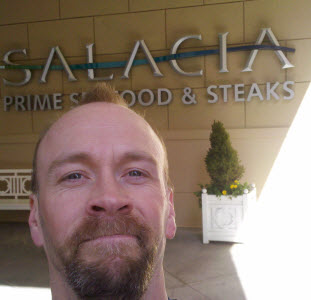 My cousin, John, and his family live in Hampton, a quaint town filled with retired military personnel about 45 min away from Virginia Beach and he agreed to let me crash at his home, which was nice. I ran a race not far from his home just under a year ago and totally forgot he lived there until after I returned home from that race. I made sure to exploit his family’s hospitality this time. I arrived in time for a short dinner and good conversation before an early bedtime. I knew the next day was going to be very long, so I needed to get some sleep.

5am wakeup and marathon morning followed her standard plan, with one big exception, no tape on the toes. I saw an ad in a magazine about a brand of sock that prevented blisters. What stood out in the ad was a testimonial from a world class ultra runner saying that now that she wears these socks, she never has to ‘tape or lube’ her toes anymore. To a guy who (religiously) wraps and lubes his toes before races, I was intrigued. And don’t ya know, there was a vendor selling these very kind of socks at the expo. So, I bought a pair and decided to (fingers crossed) try them during the race. So, this mornings race prep took about half the time since there was no toe wrapping/lubing. I am happy to say that my toes were completely fine. Not a single blister. I am going to get a few more pair of those socks, for sure.

My legs had been bothering me for over a week, being achy and tired even with a lot of rest and I feared that I still had not fully recovered from the Beast of Burden 5 week previous. My legs were dead and I just wanted to run on feel, so I decided to run completely technology free. No watch, no ipod, nothing, which was also a first. Oh, one other first. The temperature are race start was not that bad, but the wind 20 mph+ wind mad for a cold time waiting for the (15 minute delayed) start. My large trash bag that was keeping me warm (standard pre-race practice, but I usually ditch it moments before the gun) actually remained on my body for the first 2.5 miles. I looked like a dork running with a trash bag covering my entire torso, but I didn’t care as it was keeping me warm. 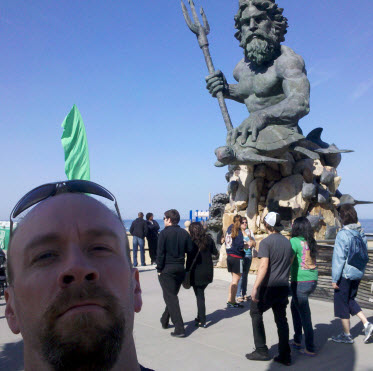 After about 4 miles I met up with a nice insurance salesman (Chemical engineer by training) named Andrew who was running his 3rd ever marathon and trying to break 3 hours. He informed me that we were on pace to break 3, which I admit, I thought about for a while, but as usual, I slowed. We separated a few times, me leaving him behind, him later catching up to me and passing me, then the reverse. Our conversations, as usually occur with people on the course was pleasant. He ended finishing about a minute behind me, setting his our new PR by ~2 minutes.
My race bib had my name on in, which has happened to me in maybe a dozen other races. In the other races, maybe 5 people during the entire race might say my name, cheering me on. But this race, I don’t know but maybe the people in Virginia are just nicer. No joke, my name was called (as it “way to go Mark! Looking great!”) maybe 150 times during the race. Not just spectators, but aid station workers and even many other runners during the few out-and-back portions.

The wind kept steady all day but the rising temperature, topping out in the low 50’s, made for a perfect race conditions. It being on or near the beach, it was a flat and fast course. As with many of my recent marathons, I ran the first half in just under 1:30, and slightly slower on the back side. I felt sore but strong all day long. My 100 miler training really had helped my endurance which this day made a huge difference. 3:06 without completely busting my butt. I’ll take it.

The post race party was probably one of the best I have ever attended. Yuenling beer was one of the major race sponsors  and so of course there was plenty of free Yuenling afterwards. And of course, I love Yuenling. The one HUGE problem was that I had a 13 hour drive in front of me and I needed to not only leave quickly, but be sober. I had one delish cup and got out of dodge. A quick shower at cousin John’s and I headed out.

I have never minded long drives alone, and I can honestly say that ultra training makes it even easier. If you can run for 20+ hours straight without losing your mind, then driving 13 hour straight is easy. It helped that there was a whole lot of college basketball on the radio. I listened to 4+ complete games.
Posted by Doc Ott at 2:17 PM No comments: