Yes, that is yet another 1st place victory. The two races could not be more different, both as races and as how I felt afterwards. Let us get the race description out of the way first.

I was in the ‘area’ (about 70 miles away) visiting my friends for an annual gathering know affectionately as ‘Geek Weekend’. It is a long standing event that 4-7 friends get together for a weekend of gaming (board and video) as well as movie watching and the eating of unhealthy food. With this marathon being so close and the timing right, it seemed a natural fit. When we got together on Friday I decided that I was going to just ‘survive’ this marathon. I had to make that decision since I knew that I would not be following my standard final days marathon preparation, staying up very late and eating unhealthy junk food.
I went to bed at about 11pm Saturday night and had to get up at 4am to make it to Rochester in time to pickup my race packet and stretch, etc. A little confusion as to exactly where the packet pickup made me a little nervous, but I ended up making it to the start line about 35 minutes before the race start.

The race began in the sleepy town of Byron, about 8 miles outside of Rochester. The race began with a long downhill with the 10 mph wind at our backs. Needless to say, we started out fast. The first 10 or so miles involved running around Byron (up, down, up…) and then long hills on the county road heading towards Rochester. It reminded me of several other small rural races I have done before including Okoboji, Johnstown, and Hatfield-McCoy. At mile 10 though, the race course changed significantly. We were in the thriving metropolis of Rochester and ran along city streets for a little while and then at mile 16 we got onto a nice bike path along a nice river that goes through town. At mile 20.5, you turn around and head back on the path for the finish. This part was flat, heavily wooded, and gorgeous. Two completely different courses, truly.
I felt ok at the beginning and did not even have a stop watch. With the ironclad rule regarding no headphones (they threatened disqualification) I had no technology with me at all. With a marathon relay and half marathon being run at the same time, I had little knowledge as to my place as the race began, but had a good ‘guess’. At about mile 5 I met up with a very nice runner named Chris who lives in Rochester. We ran together for about 8 miles, having a very pleasant conversation. He started to fade about mile 13 and I pulled away from him. At this point I was fairly confident that I was in 3rd place overall, which was cool. In my previous 14 marathons I had one 1st place finish, one 2nd, two 4ths and one 5th. I needed a 3rd to round out my top 5 placings. At a water stop at about mile 18, I caught the 2nd place dude and I heard the first place runner was about 1.5 minutes in front of me. I had no intentions of winning, and secretly hoped someone would pass me so I could get my 3rd place, but just kept slogging.

Being such a small race there was mile markers, but no race clocks. With no watch, I did not have any clue how fast I was running except for my ‘feel’. Without knowing my time, I was forced to run comfortable. At about mile 21 I got a very painful side stitch which I tried hard to stretch out while still running. For about a half of a mile I was in serious pain, but knew that stopping probably would not help, so I just had to plow through it. It finally subsided and I just tried to hold on from there. A painful blister burst on a toe at mile 24.8 (or so) was the only other inconvenience I had during the race. No signs of dehydration and again, I consumed only water and Gatorade during the race. 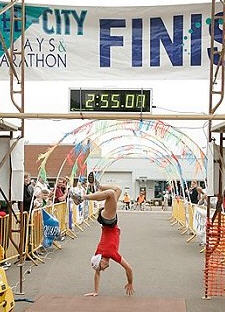 With about 1.5 miles to go. a bicyclist who had been riding near the front told me that I was still about a minute behind the leader, so I was content to take my 2nd place. At the 25 mile mark though, I saw that he had faded quite a bit when I came out of the woods and saw him only 50 meters in front of me. I didn’t intentionally speed up (I don’t think) but just kept strong and consistent. When I passed him a little later, I took a hard look at him to see if this was going to be a fight for the win. His pained look indicated that the answer was no. All I could think of was the 2007 A1A marathon when the exact same thing happened to me. Leading up until mile 25 and then crashing and losing it. This time the shoe was on the other foot. It was me taking over the lead. I pulled away quickly and now had my own bicycle escort to the finish line. With about 600 meters left to go I asked them if they could see the 2nd place runner behind me and they said ‘no’. I said ‘good, I am going to slow down a little then because I am tired’. There was no chance for a PR, so I decided to relax. Another handstand over the finish line and marathon #15 was complete with my second fastest marathon time. I read later that this race was the second slowest winning time in the 13 year race history, but the humidity was kindof of crappy, even though the temperature was in the mid 60’s. I would attribute my win partially to it just being a slow field.
After my win in the Ocean Drive marathon, I was moved, feeling euphoric, floating around for days, looking at the world through a different lens. I was a new person, now with a marathon win. After this win, though, I felt much different. Not nearly as happy, or exited. I enjoyed it, don’t get me wrong. I enjoyed the interview with the local newspaper dude, but my mental status was just not as ‘Wow! I won!’. It could have been that I was not trying for a win, just trying to survive since I was trying to enjoy Geek Weekend, I am not sure. I just felt different.

I decided to stay for the awards ceremony before I left, but was ultimately disappointed by the incredibly lame award. As with every marathon, I got a finishers medal, this one being about 1.5” square and so-so in design and quality. That was fine. However, my award for winning the entire marathon was (no joke) another finishers medal (exactly the same) but this one had a clear plastic sticker on the back that said ‘overall 1st place male’. That was it. The organizers didn’t seem to have the $3 to buy a cheap plastic trophy for the winners, but could afford the plastic sticker and a spare finishers medal. Oh well.

On the whole, it was a fun little race. I still got gut rot after the race that was painful for several hours even though the only solid I ate in the first 1.5 hours after the race was a banana. New rule: After a marathon absolutely no solid food for the first 3 hours. Just water/juice/Gatorade.

I only get to enjoy this one for a little while as my next race (which will be much different) is only 13 days away.
Posted by Doc Ott at 11:08 AM No comments: