Well, this was an interesting one in that I spent less than 25 hours in Las Vegas proper. This was what is referred to as a ‘smash and grab’ job, meaning, you go in, you do your thing, and you get out. Normally I try to enjoy my marathon locales, but this one was forced. I left for Vegas at 9:15 ET on Saturday, arriving in Vegas at 11:15 PT. I took my cab ride over to Hooter’s Casino and Hotel where I was staying and dropped my bag (too early to check in). I walked over (and took the tram for part of it) over to Mandalay Bay Casino which is where the expo was. 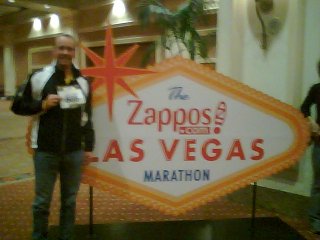 I met up with the head JCC cross country coach (and running companion) Brian Olsen and his wife and parents and we headed over for a nice $20 buffet. Pasta, steak, awesome mashed potatoes, YUM!! It was Brian who told me about this marathon in the first place last July. The night he told me about it I went online, signed up for the marathon, got a hotel room and airline ticket. It was actually kind of cool to be at a huge marathon 1500+ miles from home and have a good friend there who I have run with many a time to share the experience with.

After lunch/dinner we parted and I went to the expo which was, I have to admit, pretty lame. I have seen much better at Boston and Detroit and expected a little more. I left Mandalay Bay and headed back towards my hotel, stopping by the Tropicana and the MGM Grand to pick up $1 tokens as souvenirs, a tradition I got from my father. I decided I did want to gamble just a little bit, so I sat down with $60 at a poker table at the Hooters casino. After about 15 minutes I was down to about $20 and was thinking to myself ‘this is how Vegas was built, people leaving their money here’, but I decided the $60 was all for losing. Just then, my luck turned, getting back to $60, then ahead. As soon as I realized I was up to $125 (over double my initial investment) I quick got up and left the table. I had paid for my food and souvenirs for the weekend, so I was done.

On race mornings, I usually try to eat toast a few hours beforehand but was unable to find some at my hotel. They DID have a breakfast, but it was an $8 plate with a bunch of stuff I did not want. I decided (stupidly) to eat a Krispy Kreme donut and a banana instead. Bad idea. That would cause one of my big problems. I had heard recently that eating protein and fats on race morning are good for ‘regulating’ the carbs that you have (presumably) already loaded your body with. The 5 buffalo wings I had in the bar 11 hours before hand didn’t seem to help.

Race start was scheduled for 6:07 so I decided that leaving my hotel ((<1 mile away) at 5:30 would be fine. Umm… Not a good idea. There were thousands of people heading for the start and I had to cut through them, jumping bushes, being rude, etc, only to get to the start about 8 minutes before the start. I found Brian with 4 minutes to go and my GPS watch ‘found’ itself about 2 minutes before we started. The race began and we crossed the start line about 15 seconds after the gun.

Brian and I had talked earlier that week and realized we were shooting for comparable times (somewhere in the 2:50’s) so we went out together. We meant to start out slow (7:15 ish) but because we are us, we started at 6:45 and did not slow down because (of course) we felt great. By mile 6 we were in our rhythm, watching the strip go by, enjoying ourselves, feeling great.

By about the halfway mark, I started to slow. My ankles were not very happy with me. I had been icing them twice a day a few weeks ago trying to get rid of a nagging injury. I had stopped doing that and now they were sore and started to give me grief. Now granted, I had run a marathon exactly 14 days previous which might have effected my pain as well. My stomach also started complaining from the Krispy Kreme donut. Brian left me somewhere between mile 14 and 15. I knew I could not keep the 6:38 (or so) pace he was doing. It turns out he crashed about mile 23 and he was surprised I did not catch him later in the race. He ended up beating me by about 2 minutes and 11 places.
There was occasional entertainment (bands mostly) during the course and most were lame except for the Blue Man Group that was performing at mile 4. That was freaking cool. At mile 20 there was a fake brick ‘wall’ overpass that you ran underneath to represent the tradition ‘wall’ many runners hit when running a marathon. I made a point to smacking it with my hand as I ran by. That was pretty cool, actually.

I had little time after the marathon to make my flight so I never stopped after I crossed the finish line. Got my space blanket, some water and some fruit and started my hike to my hotel. See, they changed my flight time to 11:45 PT. I finished the race (in downtown Vegas) at 9:07 PT. So, obviously, I couldn’t stick around afterwards.

As I started walking the ~1 mile to my hotel I saw a flat bed pickup collecting orange traffic cones from the morning (when they had coned off traffic). The guy driving looked at me, saw my finishers medal and I asked him if he could give me a ride down the block. He asked me how far, I told him 4 blocks and he said sure, jump on. I climbed on to the bed of the truck and we sped down the road, saving me at least 15 minutes of walking. A quick shower, packing job, cab ride, hike through the airport and I was THROUGH airport security 65 minutes after crossing the finish line. I was quite proud of myself. I had enough time to sit down, call my mom and my girlfriend and enjoy an ice cold beer.

This was a really fun experience, and appropriate for my 10th marathon. A lot has happened in my life since I started this latest hobby. I enjoyed this one a lot.

Big lessons from the Vegas marathon:
1) Ice your ankles whenever you can.
2) Try peanut butter sandwich for race morning meal
3) For large marathons, get to the start EARLY.
4) Drink something at every water station, no matter how you feel.
5) Apples when ‘racing’? Probably not a good idea.
Posted by Doc Ott at 10:21 AM No comments: