Ok, yes I know I was supposed to be closer to a 2:55 for this one, and I was on that pace for the first 16 miles, I promise. Then the proverbial wheels fell off.

For the third time in (sort of) three times, a legitimate taper killed me. I was shooting for a PR at this race because of the flat course and expected nice weather (which I sort of got). That means I reduced my mileage quite a bit the last 3 weeks. I ran the Miami marathon three weeks ago as a jog and it was my last long run before this race. My weekly mileage, which is normally ~55 miles a week dropped to less than 30, with me only running 18 miles the week of the marathon. On Monday, 6 days before the race I went home and proceeded to violently vomit up my chili lunch. After a few very painful trips to the bathroom (dry heaves, yuck) I went to bed feeling awful. I took the next day off from work, went to the doctor and got some anti-nausea meds and tried desperately to rest and recover the rest of the week. 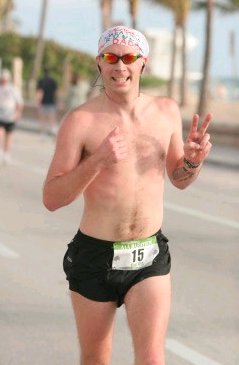 Come race day I thought I felt ok, and my legs felt great. I was just tired. My whole body was dragging, not anything specific. By mile 16 I knew I was slowing and by mile 20 all I wanted to do was stop, lie down and take a nap. That and I was really hungry too. Like Big Mac hungry. It was a feeling I have never experienced during a marathon before.

It was last years A1A marathon I had my famous dehydration hallucination bouts, so this year I made sure to drink plenty during the race, and I did taking water AND Gatorade at almost every water station. Stephanie was there as my cheering squad and each of the 4 or so times I saw her I had her offer me a water bottle with Gatorade just in case I was not getting enough at the aid stations. It turned out I did not need it, but she was such a good support crew. At about mile 21 there was an ‘alternative’ aid station. A big sign just before said ‘next stop, water or beer, your choice!’. As I came upon them I yelled ‘I need a beer!’ they cheered me on and gave me a nice cup of what tasted like Michelob. I think it was the best tasting beer I had ever had. 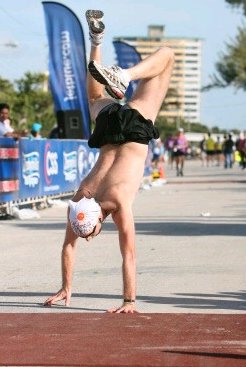 The race course, being the same as last year was still beautiful. The temperature at race start was about 69 degrees and warmed to about 76 by the end. There was a stiff steady wind (maybe 8 mph) off the ocean that at times kind of annoyed me, but kept the effective temperature down which was nice.

Last year I did not get to enjoy the post race food as I spend an hour in the medical tent due to my dehydration. This year being a smarter runner allowed me to partake of the most excellent post race goodies. Pasta from California Pizza Kitchen, muffins and cookies from Publix (Yum!) and free Michelob Ultra from the local Budweiser folk made my starving tummy very happy afterwards. I managed to save enough energy at the very end to do another handstand at the finish line which seems to be a new tradition that I have. As tired as I was I manged to hold it longer than at the Miami marathon.

In the end, I finished a respectable 17th (top 3.3%) even though I had to take walking breaks starting at mile 20. This is partly why I run a marathon every month. When I have ‘down’ races, I do not have to look far into the future for my redemption. My next marathon, only 5 weeks away is one the ocean front once again, only this time in sunny New Jersey!
Posted by Doc Ott at 10:36 AM