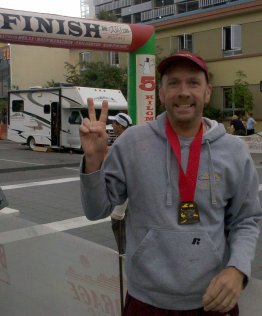 So it is inevitable that when you are trying to do something in each of the 50 states that you need to get to Alaska. Sure, it’s going to be expensive, but the beauty of the trip makes up for it. My family ( here defined as my parents, all their kids, their spouses and kids) gets together every summer for about a week somewhere, usually a national park. It is known as the ‘Family Gathering’. The gathering in 2011 is set to be in Alaska, but it being such a huge place a little more pre-planning was needed. Since I needed an Alaska marathon, I decided to turn my marathon trip into an official recon on the area.

My Mother normally does the vast majority of the planning for these gatherings, but I have begun to take over some of the responsibilities. My family came to Alaska back when I was 6 years old, and that trip contains my earliest childhood memories. Before I left or this trip, my Mother and I sat down and talked about a very loose schedule that I loosely followed once I got to Alaska, which was about 36 hours before race start.

I arrived in Anchorage late Friday night and on Saturday morning I drove 2 hours down to Seward, stopping maybe 15 times to sightsee or just take pictures. I am speed tourist, meaning that when I travel by myself and I can do enough tourist stuff to make me happy in a short period of time. This was definitely one such trip. This time of year is the rainy season in Alaska. Anchorage had gotten 28 straight days of rain before I got there. Clouds were everywhere, so beautiful pictures of mountains was actually hard to come by. Now, I am a mountain guy, and my favorite place on the planet is the Grand Tetons, but these mountains rivaled them in their awesomeness. 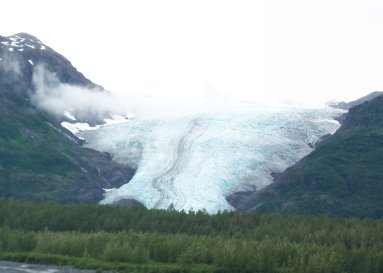 When I woke up race morning at 6am local the fog was so thick that visibility was about 200m, but moved to maybe half mile by race start, a very late 9am. This was my second race in a row running with my friend and fellow marathon freak, Gary Krugger. Two weeks previously, Gary and I stayed together for 39 miles of the Burning River 100 mile Championship but this time, he left me behind from the start. His first mile was sub 6, and mine was 6:05. Oh my, I knew this was gonna be bad. Starting out that fast is never a good thing. And sure enough, I was right.

The race course was nice, with half of it along paved bike path along the coast of the ocean, well, along the coast of a bay that was filled with ocean water. If it wasn’t cloudy, the view would have been nice. There was however a nice breeze and it drizzled on and off during the race. A nice 62 degrees made for an almost perfect running day. After almost 50 marathons, I realized that I could only think of maybe four races where the weather conditions actually sucked. I guess I get lucky with weather and racing.

Two weeks after my debut 100 mile race, my body was not at 100%. During the race, my knees gave some grief, my shins a little achy, and so I slowed from my 6:05/mile but maintained a solid pace. As I slowed and noticed a sub 3 was no longer possible, I was comfortable with holding onto a sub 3:15. I was happy with 8 points. I had 3 toenails permanently removed just 12 days before the race but they actually were fine, which was a pleasant surprise.

We were told there was a chance we might see moose during the race. We were told that is not a big deal unless you see a momma moose and a baby. They (like most animals) are worse as the mother is very protective. Well, at mile 18, sure enough there was a momma moose and her baby 5 feet off the bike trail we were racing. As I approached, a ace official warned me about the moose. No problems as both mom and child were just eating off to the side. When Gary ran through about 10 minutes earlier, Mom and baby were on the opposite sides of the path. You are told NEVER to get between Mom and child, but he survived the encounter. Tame moose I guess.

After the race chit-chatted with Gary until Morgan (Gary’s girlfriend and fellow marathoner) came in at just under 6 hours. That is a little slow by normal marathon standards, but she is recovering from a busted hip. A few months ago she ‘ran’ a marathon on crutches, in over 10.5 hours. This woman has more grit and heart than any runner I have ever met. Truiy. 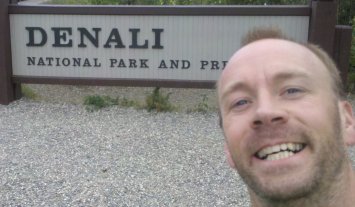 I wanted to enjoy AK for a little while, and so I stayed in the area longer than I usually do. The race was Sunday morning and my flight didn’t leave until Monday evening. After I got some lunch in Anchorage I took a 2 hour drive north to a little town called Talkeetna, 15 miles off the beaten path. You would think a town this far from civilization would be as off the grid as is possible. Nope. I had cell phone coverage as well as internet access at my hotel. Talkeetna is trying hard to survive, becoming a tourist town, so there were lots of little shops and restaurants each with their own little town Alaska flavor. That allowed me to be able to have a caribou (aka reindeer) burger.

According to the nutritional facts given on the menu it was low in fat, but high in cholesterol. Quite delish.
On Monday I woke up early and headed north hoping to see Mt McKinley, the highest point in North America at just over 22k feet. The weather in this area is finicky and apparently McKinley is only visible ~20% of the time. My luck is good, but not that good. I got to see beautiful mountains but not THE mountain. Once I realized that the weather was not going to clear, I left on my 4 hour drive back to Anchorage picking up brochures at a bunch of cool places including the Iditarod Headquarters and the Alaska Museum of Transportation.

A boring marathon but an awesome trip, which not how it usually goes. That was just fine by me.
Posted by Doc Ott at 3:56 PM