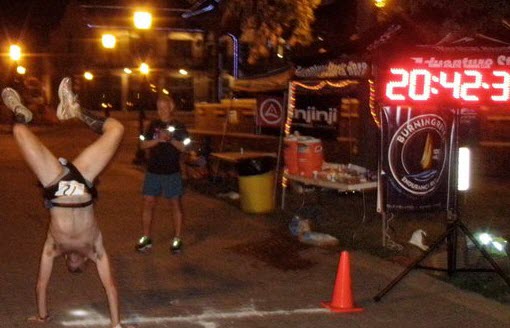 I have been focused on this race for many many months, running literally thousands of miles. I decided to try my hand at ultras a year or so ago as a ‘next goal’ after completing the whole 50 states thing. Months and months of 100-120 mile weeks (even a 140) and I felt totally awesome, like I could take on the world. Because I am lazy though, they were almost all long slow miles with little hill work. Just like I hate doing anything resembling ‘speed’ work, I hate hill work too, so I didn’t do it. ooops.

Friday night, I got to the packet pickup and did my thing, getting my race sweatshirt (the long sleeve technical shirt from 2010 was better) and sat down to eat some so-so pasta. I actually sat down with a large group of Michigan based ultra runners, all great people whom I was facebook friends with within just a few days. I also (finally) got to meet Laurie, who is a fellow ultrarunner (winning female division in last February’s Beast of Burden) who lives ~25 min from the BR race start. Her and I have become friends since BoB and she offered up her house for me to crash at, so of course I accepted. Her husband was doing BR as his first 100 miler and she was crewing and pacing him. He finished but had a rough time. Heck, we all did. On the way back to their house after dinner, we chatted about ultra running, about North Coast 24, about dream races, etc. Wonderful and pleasant conversation.
Everyone was in bed by about 7:30 since we were getting up at 3. I was pleased that I slept as well as I did, considering how focused I was on this race. Normally, I would toss and turn all night before big ones, but not this time. Maybe it’s because I knew I would not be running that hard.

We got to the race start about 4:30, just 30 min before the start. I left Laurie and company, thanking them and wishing them well, and was off to collect my thoughts. While waiting for the race to begin, I was wearing a throw away Jackson Community College t-shirt. A guy came up and asked me “Hey, do you work at JCC?” turns out it was John Yohe, fellow JCC professor (He is in the English department) whom I have been meaning to meet for a while (he said the same thing, tee hee) who was running BR as his first 100 miler, just like me in 2010. He asked me a bunch of questions and I could tell he was a little nervous. He is a barefoot runner, but this day he was wearing his vibram five fingers to protect his feet a little bit on the trail. This course was rough and the weather also took many prisoners, John among them. While he did not succeed in his goal, he vowed to conquer the 100 mile distance. I have high hopes for him, and I might even help him a future race as a pacer.

5 am and we were off, and I was in the first 7 people from the beginning, a group that contained the real big dogs, including Badwater course record holder (and 2010 BoB winner to my 2nd place) Valmir Nunes. Amazingly, his English is still pretty bad, so we didn’t talk much. The first 10 miles are on road, so we were clipping along pretty fast, somewhere in the high 7’s. Way too fast, but I’m just dumb that way. A quick aid station stop at mile 4ish and right back on the road.

At mile 10ish I hit the second aid station, and the first with crew access, and I saw for the first time this day, Ryan, my wonder crew. Regular readers of this blog know Ryan, my awesome crew/pacer from the BoB and race director of the Jan 1 Get Off Your Hungover Fat Ass and Run 26.2 marathon. He had been at a friends wedding back in Michigan until midnight the night before, then drove down and crewed for me all day on no sleep at all. He is a monster. He didn’t know until about a week before hand if he was going to be able to crew for me at all, so I prepared ‘drop bags’ for the course. Eight green plastic containers with spare socks, shoes, some candy, and my powder rocket fuel. Having run a few ultras, I knew that I had a hard time eating any solid food, so I needed some high calorie liquid fuel source. For few months I tested a solution that was 1 scoop gatorade (for flavor) 2 scoops carbo-pro (for calories) and 2 tiny scoops endurolyte powder (for electrolytes). Pour the powder into a 16 oz water bottle and fill. All told, about 300 calories and I had about 12 of them during the race. Saved my butt for sure.

I talked with Ryan for only a few minutes and I was back on the course, no finally on trail. I was in the top 10 and feeling pretty darn good. I would be passed by several people, finishing 15th overall, but ~8 people in front of me would drop, including Valmir. Aid stations came and went, changed socks at mile 18 (shoes wet from dew drenched grass), changed shoes at mile 33, drank my rocket fuel, ate some candy. Ho-hum right along as the sky remained overcast so the conditions were not that bad. Even the hills those first 40 miles weren’t that bad, as I walked up most of them.

Just before the mile 49.1 aid station, I noticed how hard it was to get running again after a walk break. I knew that point would come, but had hoped it would not be until way later in the race. The next section was ~4 miles and the first part was flat trail, so I ran that part which was just over a mile. It was the last complete mile I would run for the entire race. It was about here, that my emotional train wreck began. Not being about to run for any reasonable amount of time with ~50 miles to go meant I was going to be out here for a long long time. Coming into aid stations, I would jog just to show some semblance of confidence, but soon after I left an aid station, I was back to my walking ways. I know it sounds silly, but I had trained for this part, power walking when tired. I was still doing 15 min miles. I was tired, and mentally drained, but I knew I could pound out 15 min miles until the cows came home. Since I never sat down and rested (ever!) I still managed a good finish time. 10th place in the 100 mile national championship and I walked roughly half the course. What does THAT say? 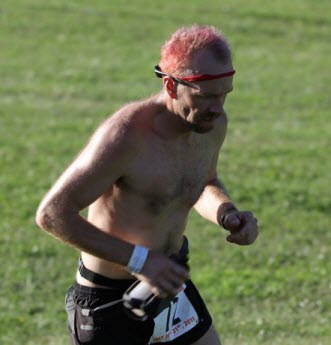 The emotional train wreck came about because I knew I was not going to do as well as I wanted and I had worked hard for this race. When you know 12 hours before the end that you are not going to do as well as you wanted, you have a lot of time to ponder your fate. I was thinking really hard about my running career, and in the end, I decided that this might be my last 100 for a while.

I was getting blisters in new and interesting places on my feet, but none of them were debilitating. At one point it started hurting with every step, especially when ‘running’ so I just stuck to walking as fast as possible. The downhills eventually became the worst parts. With tough race conditions, the course would have a 50% casualty rate, which is high for even an ultra. At no point did I think I would drop from the race, but I knew it would not be that fast (this was my slowest 100 miler by far) since I am a unrelenting stick-in-the-mud when it comes to racing. I might not finish fast, but damnit, I am finishing.

The aid stations were as awesome as they were last year. Nice people, getting you want you need and loaded with food choices, most of which I ignored. I ate my fair share of grapes and a few cups of ramen noodles. I have never been good and keeping solid food down but this year I tried to eat fruit wherever possible as that seemed to sit ok with me. Ryan did a great job keeping me hydrated with plenty of electrolytes which kept me alive, for sure. My favorite aid station memory was at mile ~70. I walked up to the table and saw a 1 gallon ziploc filled with fresh-picked-that-morning blueberries. I said “Blueberries!!” and stuck both hands into the bag and scooped up a double handful of blueberries and stuffed them in my face in one motion. Only after did I realize what I did. All’s fair in love, war, and ultras. Leave your ego at the start.

This race was harsh and brutal and by far the toughest race I have ever run. with an attrition rate of close to 50%, the race course won this battle. Turns out some people even dropped at the mile 96 aid station. An elite (who was in 4th place at one point in the race) dropped at mile 93 in front of me. I think the fact I never sat down all day (except to change shoes) made a big difference. Had I sat down, I doubt I would have gotten up and it would been all over.

After the race Ryan and I (slowly) headed to our cars and back to the hotel for a quick (ha!) shower and some sleep at about 3am roughly 24 hours since I woke up. My feet were so bad and my legs so sore that I never really slept as I could not get comfortable even though I was dead tired. At about 8 am we headed to Bob Evans for a good meal and then I sent Ryan on his way home. I headed down to the finish line getting there about 30 minutes before the 30 hour cutoff. Saw the last finishers come in, some looking ok, most looking like death. I had pleasant conversation with John about his DNF, and with some other runners, some who finished, so who did not. Turns out everyone had a rotten day, just like me.
A boring awards ceremony, a medal for my 10th place USATF National Championship and I was on my way home alone to ponder my future. I stopped 5 times on the 3 hour drive because I was falling asleep and so I needed food and caffeine. It never really helped so I got home and crashed trying to sleep and failing again. It would be three days before I was able to sleep completely through the night. A memorable race, for a whole bunch of bad reasons. This race will be a turning point in my running career, for sure.
Posted by Doc Ott at 1:54 PM