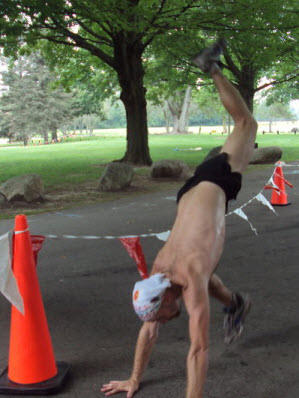 This race is billed as the ‘toughest race east of the Mississippi’, and while I agree, it is tough, I have run harder races on this side, notably the Larry Yaegle trail marathon in Louisiana. It would end up being tougher for me because of my poor attention, but still a fun race.
This race was only a 1.5 hour drive from my house so again I got to sleep in my own bed, a recent change of my marathon racing policy. When my alarm went off at 4:25 am, I woke up wondering why it was going off that early on a Saturday morning. It took me a few seconds to remember that I had a marathon that day. I chuckled at myself (out loud) once I remembered that.

It was three weeks after my Burning River run and one week after another small local marathon, and my body has been sore, so I decided to take the week completely off from running. While I was not 100% today, I was a solid 85%. Taking the week off helped, making it so I was not cursing myself for even running the race.

Being a small town trail race, the race organizers had no time limit (usually 6-7 hours for most major races) and so there were quite a few more ‘experienced’ runners. (translation very slow runners who would finish in >9 hours) of which I met several before the start of the race. Many of them have completed the 50 state circuit (some more than once) a few members of the 100 marathon club (a goal I will accomplish in a few more years) and a few Marathon Maniacs. We chatted about standard stuff (favorite races, costs of traveling to races, etc) and about 2 minutes before the race start, we all headed to the start line.

Race conditions were near perfect. The temperature was in the low 60s’ and would reach the low 70s before the end. The trail was mostly single track and in some cases looked like it was made mere days before with some guy driving through grass with a mover. There was one large grass area (with two foot high grass) that we zig-zagged through 6 times. Challenging, but not super tough. There were a few hills we went down that ropes had been put up so you could hang on to them going down the hill to prevent you from falling. I only fell one time, running on flat trail, stumbling on a rock. The course was VERY well marked, and I really appreciated it, except for one very critical part, which is why I ran an ultra marathon this day instead of a marathon.

All three races (5K, half marathon and full marathon) started all at same time. About 1 mile into the race, we turned left off a dirt road onto trail heading back towards the start line (to drop off the 5K finishers) then the half and full marathoners continued out onto another section of brutal hills, eventually coming back to the start line to drop of the half marathoners. I crossed the half marathon point in 1:50, which is a fine time considering the brutality of the course and I was firmly in 4th place.

So 1 mile past the halfway mark, I came to that spot that ~13 miles before I turned left onto the trail heading back to the start. There was just one sign and it said ‘All runners’ and had an arrow but said the words ‘loop 1’. I turned down the path and got about 50m before my brain said ‘hang on, is this right?’ I went back and inspected the sign again and it was certainly not clear. I stood there stopped for a good 30 seconds waiting for the 5th place runner to come up and help me figure out where to go. I finally decided to head down that trail, even though it didn’t feel quite right. I said to myself, what’s the worst case scenario? I add ~3 miles to the distance. Well worst case scenario happened.

I make it back to the start line (visibly upset) and I ask the race director where I went wrong. Turns out just 20 meters past that #$^@ing cone at mile 1 was another cone (smaller, on other side of road) with a sign that clearly pointed down the dirt road to the RIGHT. So I thanked them and left the start line. Again.
When I got to that cone, the race director was just pulling up in his car (making sure the cone was there) and he asked me how many ‘additional’ miles I had added. I told him a little over 3 and so he actually offered to drive me a ways down the course. I told him no, but thanks anyways and I trudged down the course, cursing myself for my stupidity.

Now that I had gotten back on track and given my competitors a roughly 26 min head start, I actually started passing people. In that last 12 miles of the race I think I passed at least 10 people. The second half was also trail but also a ~3 mile section of long rolling hills on back roads. The run was quite pleasant, just tough. When i crossed the finish line it seemed everyone near the finish area was cheering. Great ‘crowd support’ to go with the great feel of this race. 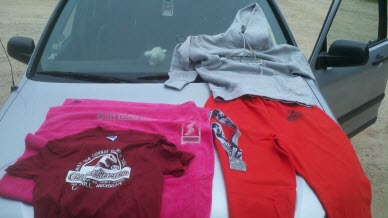 The schwag from this race was awesome. The entry fee for the race was $60 (not too bad) but for that I received a cotton t-shirt, a cotton sweatshirt, a finishers pair of sweatpants, a finishers beach towel, a nice finishers medal and a nice 4th place-in-age trophy. Hauling all that back to my car after my 29.5 mile run removed all the angst I had over my mistake. The spread of post-race food was also quite impressive. That hot dog tasted goooood.

While it was not the toughest marathon east of the Mississippi, it was a lot of fun and I will definitely be back next year to run this low-key-friendly-neighborhood-style marathon. And don’t worry, I will NOT miss that turn next time.
Posted by Doc Ott at 1:48 PM