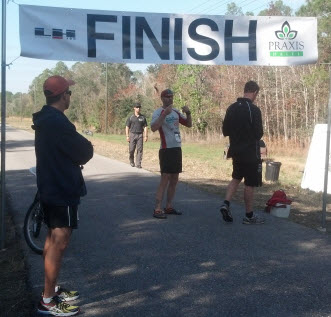 You might call it a DNS, but I call it prudence. This weekend, I was supposed to be running the 100 mile race, but due to a nagging ankle issue I had to ultimately drop down the 100 furlong race. Not running the Hundo was sure to depress me, but I tried to make the most of it, and I succeeded.
By the time I realized my ankle was going to prevent me from running full Hundo (mid December), I already had plane tickets for Misty and I as well as hotel and rental car paid for in Tampa. We decided to still go through with it and enjoy the warm weather of Florida in January.

We took off in the sub freezing weather of Detroit Friday morning and landed in 60 degree weather in Tampa. Oh, so beautiful. On Friday night, we met up with a handful of local ultrarunning folk who were racing whom I met last fall at the Beast of Burden in NY. It was conversations with them that convinced me to come down for this race in the first pace. I also invited along one of my running friends from Michigan to join us for pre-food and drinks as well.

It really was fun conversation talking, swapping stories, training strategies, race plans, as well as giving friendly grief to one another. I love the ultramarathoning community. All good people who are laid back and friendly. No meanie heads.

While the Hundo started at 7 am, Misty and I woke up about 7:30 and took our sweet time arriving to the site about 9 am for the 10 am start of the 100 furlong race. I had thought about coming to the start to cheer people on, but I was told the night before ‘The start will be boring, sleep in’, and so I did.

My right arch/ankle had been sore and tender for weeks so I had been babying it for a while trying to get better, but I wanted to have SOMETHING to show for my trip, but I was still a little scared as I have not done any sort of ‘run’ on my ankle in over three weeks. I decided to start it by running and go as long as I could and if I started walking, no problem. I would walk and finish and earn the t-shirt I received at check-in the night before.

The real races this day were the ultras, the 100 mile and 100 K. My ‘race’ was very low key, with maybe 25 runners. I was not sure if this was for friends and family who were here to support the ultra folk or actual runners trying for fast times. I am guessing the former as I won the race, however a few of the runners looked like speedsters. I knew I want to be as gentle as possible on my feet for my ankle’s sake, I decided to run in my new pair of Vibrams to force me to make short, quick strides. The race started and I took off like a bolt dropping my first mile in 6:44. I had obviously not done a real run in 3 weeks and the adrenaline was coursing through me. The ankle was tender, but not that bad. I paid very close attention to it, and it never got worse. In fact, I would say it felt better after the hard 12 miler than it did before I started, which was way cool.

The ultra runners has been running for roughly 3 hours by the time I started so it was obvious when I came whipping by them that I was a (lazy) 100 furlong runner. I gave a thumbs up and/or verbal encouragement to every runner I saw, which was most of them due to the nature of the course. A huge out and back with a couple of loops inside that. I actually like such courses for ultras so you never feel alone no matter what your pace is. Point to point races, while visually diverse, have long stretches sometimes hours where you don’t see another soul, which can be depressing.

I kept looking at my watch (a rarity for races) as I was feeling strong and wanted to keep the sub 7 pace I had started as long as possible. At about mile 5, I tripped on a root, stumbled a few steps and then gave up the ghost, rolling over and crashing down pretty hard. I was back up in a few moments but it took at least a half mile to unkink everything I kinked when I fell. Most of the race was on trail but the few sections on pavement helped me keep my pace right near 7 min/mile for the entirety of the race. I felt awesome all the way through the finish, coming in just over 1:25. No bad considering my injury and lack of real running recently.

After the race I was met by my lovely wife with a nice sandwich from a local place and we chatted for a little while before we offered ourselves up as volunteers. We were stationed at the aid station that wasn’t. It was an intersection that the runners run by 4 times each 14 mile loop and where the spectators/crew spent a lot of time but the only aid was water and Heed. Our job was to keep an eye on the station (crewed by other people) and help keep an eye on the runners. I was sent there to be a set of ‘ultra eyes’ meaning, someone with some experience in case something went wonky. As a last minute volunteer, you get put where they need you, and that’s where they needed me I guess.

Somewhere in the mid-afternoon I was tasked with putting out some reflective markers along one stretch of the course and whilst doing that I came across another runner friend, Ed, whom I met at Beast of Burden last August. I biked next to him for a few miles which was great fun. We chatted, me biking, him running gently but strong.

Misty and I left about 4 pm to head back to hotel and get ready for dinner with a High School friend of hers. Dinner and a few drinks along with fun conversation was great fun, and then I left them about 7:30 to their girl talk and I headed back to the course to help out some more. I returned to the aid station that wasn’t and hung out there for many many hours. I tried to help the runners with suggestions when it was warranted and wanted. Tips for stomach issues, how to walk faster, etc. Simple things that when you are at mile 70 of a Hundo, you will forget until someone (me!) reminds you. It really makes a difference. Damn, I need to write a book…

A little before midnight, the eventual winner asked if I was available to pace him to the finish, as he feared 2nd place was gaining on him. His wife took over my aid station watching duties while I motivated him the last 4 miles, frequently looking back to make sure nobody was sneaking up on him. 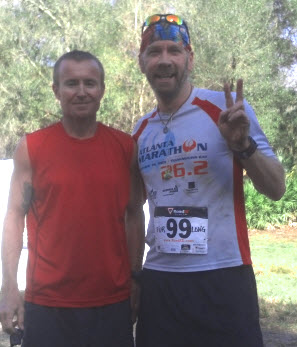 Soon after I returned to the aid station that wasn’t, Mike Morton, famed ultrarunner stopped by to see what was going on. Mike is a quiet, but very nice guy who is also just a kick ass ultrarunner holding the US men’s record for 24 hrs, winning Badwater 2012 (missing the course record by 76 seconds) and a few Western States victories. Oh, and he was selected as the 2012 Ultrarunner of the year. Suck, he not.

All day long people had been coming up to him and telling him congrats on his 24 hr record, how he’s awesome, etc. I knew he needed no more accolades and I also realized this might be the only time I ever get to chat with him in person, so I made the most of it, talking shop.
We chatted about training (food, mileage) and racing (USATF and race frequency) and at one point I gave him an idea and he said ‘Wow, thats a great idea! I’m gonna try that.’ That was freaking cool. He also told me about he had recently to switched to a nutritional ketosis eating plan. Basically, it is a ‘smarter’ Atkins (low carb) diet. Not for weight loss, but for endurance. Trains your body to run of fat only and your long runs become very sustainable as humans carry enough fat stores to run for days on end. I have since done much research, and I will be trying my hand at it as well.

At about 2 am I talked to the volunteer chieftan asking her if there was something else she wanted me to do. She asked if I was willing to play golf cart driver running supplies up to the far flung aid station as well as cart (dropped/finished) runners and gear around the course and to the parking lots (~1/2 mile from start/finish). No problem, but by now the temperature was in the low 40’s and I did not bring THAT many clothes so driving an open air golf cart made me a little cold. I suppose it did help keep me awake.

At about 5 am I knew I had to pull plug since I had a 30 min drive back to my hotel and knew I had to get at least a few hours sleep before I got on my plane back home. I thanked them for a great race and the opportunity to give back to the ultra community that I love so much.

With a scant 3 hours of sleep, which seemed to be enough, Misty and I were on our way back home. It truly was a great weekend where I thought I would be depressed for not racing the Hundo, but ended up having a great time running a solid 12.5 mile race and helping other runners. A great and unforgettable experience, as usual.
Posted by Doc Ott at 6:30 PM

Email ThisBlogThis!Share to TwitterShare to FacebookShare to Pinterest
Labels: Results