RX Run 12-Hour Results (or: A Water Shed Day in My Running Life)

Well, I had high hopes coming to Grand Rapids and kicking some serious butt on a beautiful 1.55 mile loop timed race. My training had been going ‘ok’, and I had my ace crew chief (My lovely wife Misty) there to help me. Alas, I would ultimately pull myself due to a medical issue, a decision that was more long term than you might think. 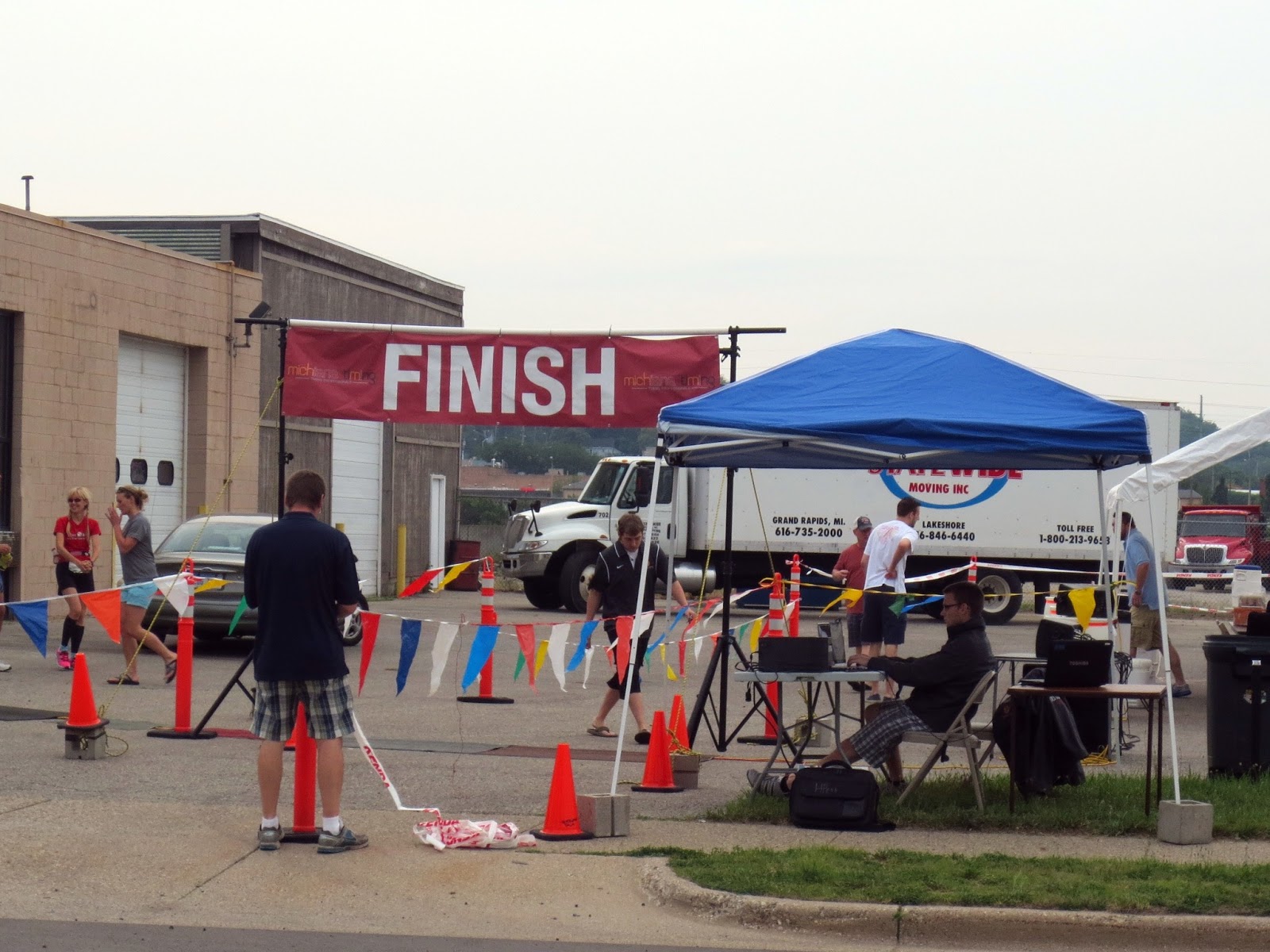 Misty and I arrived in town the night before, picked up our packets, ate dinner and just relaxed in our hotel room. It was standard night-before-race conditions where I go to bed and wake up at 2 am, unable to fall back asleep and I have crazy nightmares in my half-awake state between 2 am and when the alarm went off at 5:30 am.

Being the day after the Summer Solstice, there were plenty of hours in the day to have a 12 hour race and it be light the whole time, so I was totally ok with an 8 am race start. The temperature was already in the mid 60s and a little muggy, but the sky was overcast and combined with a gentle breeze, nobody complained.

The race was put on by a local company WellBeing, LLC and they are trying to promote mental health (addiction, depression, etc) treatment with basic exercise instead of drugs. As anyone who gets runner high more than a few times a week can tell you, it totally works. While when I started running back in 2005 it was to loose a little excess weight, I quickly realized how my life had become low stress, and I sure liked it. Here was a local organization I could totally support. This was their first race, so they had some hiccups, but I thought they did a great job.


The course was a simple 1.55 mile loop along the Grand River, which was actually quite beautiful. With a loop that distance, you only need the one aid station at the start finish which was stocked with standard ultra fare (even though there were only a handful of ultrarunners) but of course I did not partake of any of it, due to my ketosis diet.

With the low-carb diet, I brought along my own stash of fuel including fresh berries, almond butter spread on low-carb tortillas, and homemade keto energy gel. I set up my aid station just past the start finish where Misty hung out and helped me when I came around when she was not walking herself. She managed to (officially) finish 7 laps of the course in between helping me. I enjoyed coming up behind her on the race course. Her smile helped me a lot. She is just so darn cute...

The race started, and as usual, I started out fast, doing the first 8 miles in just over an hour. It was a little fast, but I felt good. My ankle was uncomfortable but it has been for 8 months and I knew it would only get a little worse then just be a constant pain, so I ignored it. 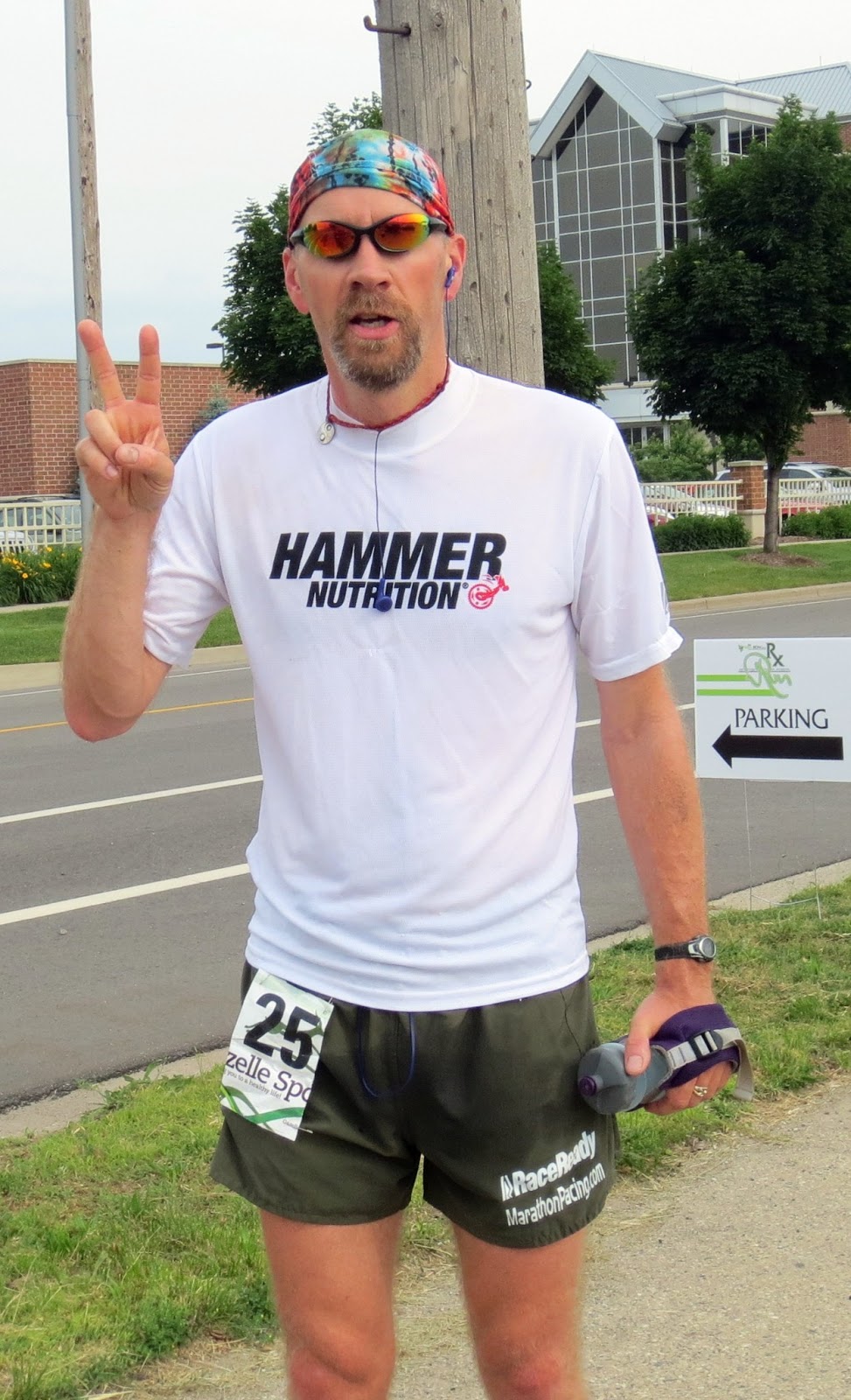 I hit the 26.2 mile point of the race in 3:26, so that was nice. I was feeling pretty good and of course making wild predictions about how many miles I could actually run. I was running each 1.55 mile loop in 13-14 minutes, loop after loop. I was doing what I wanted, running even.

The temperature would eventually get to 88 degrees and I knew that so I was drinking as fast as I could, roughly 8 oz of liquid every mile. Yup, that's a lot. Think about doing a ‘shot’ of water, once per minute, every minute, for 6 hours. That's how much I was consuming, and yet it still was not enough.

Ketosis involves using fat as your primary fuel source (instead of carbs) and I have been doing it since March, with the desired results in that I can run and run and muscles do not get sore. One issue is that if you body is burning fat for fuel, it requires more water than a ‘normal’ diet just because of the nature of the process. Put more simply, keto athletes have to drink more water than non-keto athletes.

And that is why 1oz of liquid per minute was still not enough for me. I have had dehydration problems long before I went keto so I might have other medical hydration issues.

Everything (besides my hydration) was going great. My muscles were not cramping, my mind was focused. My stomach was doing just fine as well. My hourly Hammer Nutrition pills were keeping me going just fine.

I had urinated twice in the first 4 hours and everything was cool, as it was a light yellow which is what I wanted. But of course, I had a lot of liquid ‘on board’ at the start of the race and I burned (ha!) through that pretty quick. Halfway through my 28th lap (which would be my last) I stopped to pee a third time, and a stop sign showed up. Yup, I had blood in my urine. Again.

I continued on and met Misty finishing her 7th lap about 100m from the start/finish and gave her the bad news. We decided to stop there and get water in me and monitor the situation.

The last time I peed blood in an ultra, I ended up in the hospital for 36 hours. I was not going to do that again. So we sat there for an hour and a half putting water down my gullet as fast as I could drink it, and eventually my urine cleared, but I had been scared enough and my motivation had taken a huge hit as I knew I was not going to achieve my goal miles.

My health is worth a hell of a lot more than how many miles I can run, so I decided at 7.5 hours into it to pull myself from the race. Misty and I packed up and left as I did want to hang around and beat myself up after I made the (hard) decision to bail.

To take my mind off the situation, Misty took me out to an early dinner and a movie. She is the most awesome life partner I could ask for. She knows me so well and knows how to help me when I need help. She knows what to say when, how to be supportive, and when to just be a shoulder to cry on.

A very depressing end to a race, but it made start to think about much bigger things. It is time to re-evaluate my running career. I am not sad, mind you. I see this is a karmic sign to make changes. To go back to enjoying my running.
Posted by Doc Ott at 9:00 PM