2013 Greater Lansing Area Sports Hall of Fame 10K Results (Or: A Little Farther For the W) 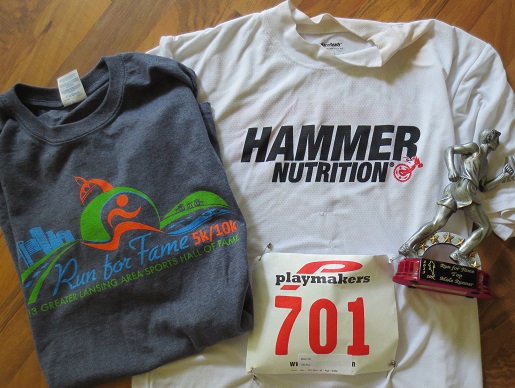 So I recently decided that I needed to get back to my running roots in an effort to re-motivate myself before I totally gave up on this sport. My first race in this new ideology was a small town 5K a few weeks ago which was great fun. This race was the next in the logical length sequence, a local 10K. I discovered a few things about myself, all of them good.

The race was organized by the Greater Lansing Sports Hall of Fame, an organization trying to promote athletic achievement in the (duh) Greater Lansing area. They have an annual induction ceremony and such, and just like the NFL hall of fame, they have a sports event to coincide with the induction, in this case, a 5K and 10K pair of races. 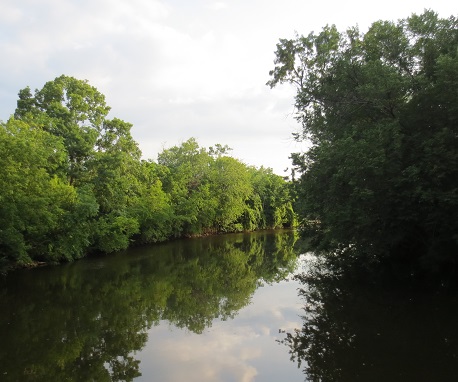 The race started in downtown Lansing just a few blocks from the state capital, then headed south along the Grand River with both races being simple out and backs. I made sure to enjoy the view of the river during my warm-up, because I had a feeling that I would not be wanting to sight see during the race. I was right.

At race start, I looked around and tried to get a 'read' on the competition and saw nobody who looked like they were real speed demons. There were a few high school guys up front with me but they were both running the 5K, so I would not know what I was in for until ~1.5 miles in when the 5K races took their turn.

I go out in what I think is a comfortable pace, hitting mile 1 in 6:02, but not knowing if I could hold it that long. It felt good, but difficult. Part of this race experience was to test that middle distance speed+endurance race strategy. I have been doing more short (6-8 mile) training runs with a speed component, and it paid off. As I came up to the 5K turn, the leader was ~50 meters in front and I was gaining on one of the teenagers. Much to my surprise, the leader had turned, which meant I was leading the 10K race and I would stay there all day. There was volunteer whose job it was to be lead dog (well, he had a bike) for the race who had been waiting at the 5K turn. He wasn't really paying that close attention, so I actually had to say 'GO!' to him as I almost ran into him. I did not look back to see what sort of lead I had, but from cheering spectators, I could tell it was small.

I hit the turnaround in 19:10 and finally had a chance to see what my lead was, and I got concerned as it was only about 20 meters. I was feeling ok, but not sure how long I could hold that pace. You see, I always start races too fast and generally wilt at the first sign of distress. For whatever reason, this race was different. I was going hard, but still had plenty of energy. I ate a Hammer Nutrition Energy Bar 2 hours before the race, my electrolyte pills as well as some amino acid pills. My brain and muscles did great all day long.

The mile markers came and I was holding 6:05-6:10 pace mile in and mile out, which surprised me a little. I was getting tired, but maintaining speed. Again, this is not normally me. With about 1.5 miles left to go, I looked over my shoulder to see what my lead was down to, and I swear he was only 5 meters behind me. I briefly had my standard thought in such a situation, "oh good, soon he will pass me and I can relax and take second place".  Then a new, never seen before thought appeared.. "Or, you could press a little harder and try to break his confidence, drop him, and go home with hardware." I bore down, pumped my arms and tried to put in a good 600 meter pickup in an effort to separate me from him and it did not work. With about 1200 meters to go, he was still 5 meters back. By now I was breathing heavy and my arms were doing a lot of work. Nearing the finish, maybe 400 meters from the end there was 1-block-long hill, and so I again I dug a little deeper, tightened my face and pounded up the hill in an effort to separate myself and this time it worked. When I got to the top of the hill I looked again and he had dropped back to about 10 meters behind me. I was confident now I could hold him off, but I still caught myself glancing back to make sure he didn't have some super-human afterburner that he was waiting until the very end to use. He did not.

A pleasant post-race cool down with some of the other runners, including Karen, the female overall winner. As we were coming back from our cool down run the announcer was asking if anyone had seen Karen or I and that we were to report to the finish line. They had been wanting to give us our hardware. 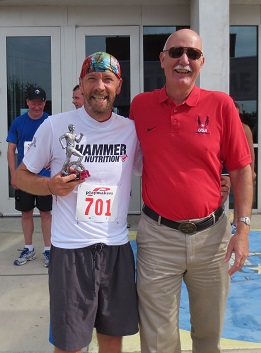 My award given to me by Eric Zemper, a 2013 inductee into the Greater Lansing Sports Hall of Fame. In reading his resume, he is a pretty big deal. Nice guy, too. The whole award ceremony was done in short order and I packed up and got ready to go.

You might just think this was just another race, but it was significant. The W is nice, for sure, but more importantly I learned that I do have some killer instinct still in me. Lately I have been trying to get my groove back, and it is returning, but the competitive incentive is helping.

I am really looking forward to my next race in 3 weeks, a local half marathon. I would tell you my goals, but I am not sure what they are yet, except I wan to enjoy it. :)
Posted by Doc Ott at 6:55 AM