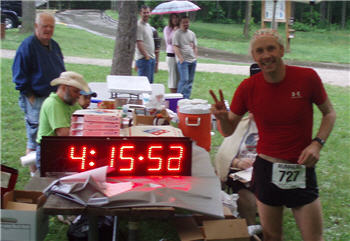 This was only my second ultra marathon, but this one I finished the distance I planned to complete. Way back in November of 2006 I attempted a 50 mile run but (because of sickness) had to bail after 34 miles. The official rules for that race were if I bailed when I did, I got credit for (and a medal for) finishing the 50K that was held at the same time. This time I came in well trained and reasonable healthy. I did run a marathon 13 days before this one, which took me a few days to recover from.

The day started out hot (~80) and humid (~80%) and the bugs were pretty dense as the starting line was in the heavy woods. The course is a was a large figure 8 shape in which we ran around 4 times in total. There were two aid stations, one in the middle of the figure 8 and one at the start/finish (the end of one of the loops) so we were never more than ~2.5 miles from water. I still took a small 10 oz plastic bottle that I filled with Gatorade each time I hit a water stop. 65% or so of the course was on trail, either hard packed dirt or grass.

I took the lead about halfway around the first loop and just tried to get comfortable. The hills, grass, and dirt trail made the course slower than a road race (obviously). The weather also slowed me. I was still in the lead when I made the turn after loop 2. Very soon after, however, I lost it to the eventual second place finisher. What also started was much worse, rain. Yes, light, but constant rain. That turned the slick dirt course into a wet and muddy mess. When running through the woods, the tree cover tempered the worst of the rain, but it still slowed me down. The good thing was that the rain dropped the temperature down into the 70’s. The race turned into a long easy Saturday morning run for me, just getting through it. I never had any bodily issues. 24 hours afterward I feel just fine, my muscles only slightly sore, but no more than the day after a garden variety 14 mile run. 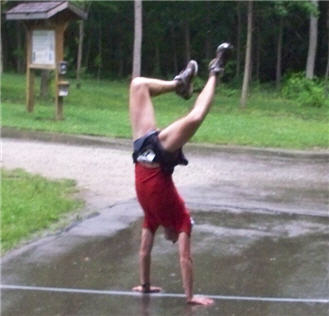 This was a very low key race, with mostly locals doing the run. Nothing flashy, including no awards (at all) but this was the cheapest (ultra)marathon I will probably ever enter at $25. The post race food included hot pizza, which was a first for me. Well supported, nice course, small race feel, all added up to a very enjoyable day. I wouldn’t mind running this one again actually, which is a very rare thing for me to say.

My 3rd place finish is significant as I never had one before. In my 15 marathon races, I have two 1st place finishes, one 2nd, two 4ths and one 5th. I needed a 3rd place to round out my top 5 place finishes. Now I have (as one runner remarked yesterday) ‘hit the cycle’.

Lessoned learned:
~You can eat solid food within 3 hours, you just have to eat it slow. I took ~45 min to eat 1 piece of pizza and my stomach was fine.
~ Completely tape all toes but then also slather the taped toes with Vaseline. I did 31 miles with this preparation and had no blisters. Remember, my feet were wet pretty much from the beginning, so this is a significant trick.
Posted by Doc Ott at 11:10 AM