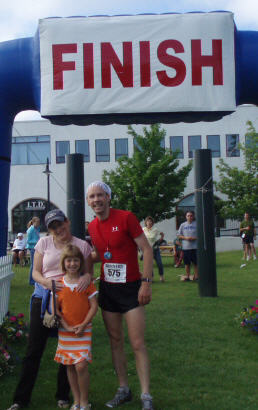 I just love small town races, and this one was no different. Charlevoix is a small town on the northwestern edge of Michigan’s lower peninsula right next to lake Michigan. The town had some mandate a long time ago to plant multi colored marigolds along the main drag of the town, so there was just a long line of beautifully colored flowers all over town.

For this race I brought along my daughter, Salacia, and my girlfriend, Stephanie. We rolled into town in the afternoon the day before the race, checked into our motel (bottom of the barrel, actually. It seems Charlevoix is THE place to get married, so (surprise) there was not a whole lot of choices for the last weekend in June when I booked the room a month ago.) and then went downtown to check in for the race. We then drove a small amount of the out and back course before we had dinner at a nice local Italian restaurant. Veal Parmesan seems to be my favorite night-before-race food. Yummy!

After we got back to the motel, Salacia having just got her 8 year old birthday present from us of ‘dress up’ clothes did a fashion show for us. 11 different outfits later, we had a winner. Let me just say that it involved a purple hair extension, butterfly shaped sunglasses and the most gaudy purse you have ever seen. It was fun, I admit.

As usual, I did not sleep very well and got up at 4:10 am for the 7am start. Peanut butter sandwich, white tea, shower, blah blah blah, my pre-race ritual now set in stone went off without a hitch. It had rained all night long and was just petering out as I left the motel for the 0.8 mile walk to the start line at 6:15. Stef and Salacia slept in (sort of) promising to see me at the turn (halfway mark). They would see me 4 times, halfway, mile ~16, mile ~20 and then again at the finish. Salacia was in charge of taking pictures and got a lot of me from behind. 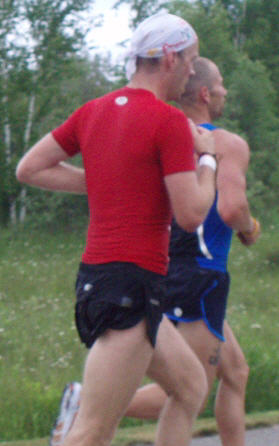 The race start was unexciting. There were 4 races going on this day, a full marathon, half marathon, 10K, and 5K. They all followed the exact same course, all out-and-backs, with the marathon being two trips along the half marathon out and back. The four races all started at different times, and honestly, after my first turn at mile 6.5 I had no idea what race the other runners around me were running. I was never ‘on an island’ but was passing people (both directions) all day long. The temperature was in the upper 60’s the whole race, but the humidity was about 120%. That ultimately slowed me down, mostly because my shoes just got heavy from water (puddles) and sweat not evaporating. I would say my shoes were about 3 pounds heavier than they were supposed to. Not a whole lot of weight until you realize how many times I had to pick them up (many thousands).

I was (at least initially) shooting for a PR, but my watch died literally 59 seconds into the race. With it being a out and back (twice) course there were no real markings after mile 6 so even my watch was working I would not have known what my pace was. So once again, I ran as my body felt. ¾ through the race (last turn at half marathon turn point) I was right next to the eventual 3rd place finisher. I asked him our time and estimated my pace up to that point. I was (I think) still on 2:50 pace, but was fading fast. I was positive I was not going to be able to hold that pace, so I slowed a bit, just running on feel, wanting to survive. Most people would kill for a 2:56 finish. Me, I seem to jog to those finish times. I have run 4 straight marathons now in less than 2:57. Not bad, I guess. I will set a new PR, I just don’t know when. The next three marathons I will be running will not be conducive to PR attempts, so maybe I should go get my PR tattoo from the Kentucky Derby Festival Marathon now. 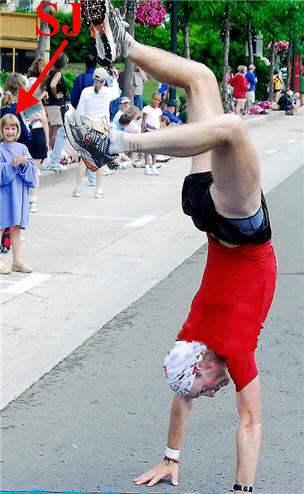 I have learned from previous long races that I cannot eat solid food for a few hours after a race as I get painful ‘gut rot’ afterwards. At the end of this race they had Gatorade and water but also Pepsi. I thought the issue was solid food so I gouged myself on Gatorade and water and drank a can of Pepsi. Well, that gave gut-rot but of a different sort. Before, the pain was constant, feeling like someone had punched my stomach (hard) but this time it ebbed and flowed but with the same pain. This lasted for a full 8 hours after the race. So, the big lesson learned this time was no carbonated beverages and to not go overboard with sugar beverages after the race. Again, I had nothing but Gatorade on the course and seemed well hydrated during the run.

I used to think only 3 people read my blog. My girlfriend, my Aunt Nancy, and this nice woman I met after the 2008 Groundhog Gallop race. It turns out there are a few more, and they were all running the race this day. Four, count ‘em four people along the race course talked specifically TO ME with comments like ‘Way to go Doc!’ and “You can win this one too!”. In all cases I did not respond, because I was too dumbfounded by the comments. Before I internalized what happened, the other person was long gone for me to respond. If you are reading this and you are one of those kind people, I thank you now for your words of encouragement. It was a weird experience. At the finish line I was talking with the guy who got second place (by only a few seconds) and he had also read my blog. The readership of this blog seems to have doubled (from 3 to 6) in the last few months.

A pleasant run, for sure. A cannot believe I have run 17 of these things is just over 24 months. What kind of addict am I? Do they have therapy for these kinds of things?
Posted by Doc Ott at 11:12 AM