So a while ago I realized that I seem to be a marathoner. I enjoy the distance much more so than shorter 5 and 10K’s. The mistique of the marathon is what draws me to it I think. People respect the distance and I am good at it so… 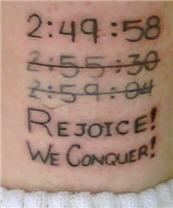 Last year I decided to be creative in my personal quest and got a ‘PR’ (personal record) tattoo. Putting my ever diminishing marathon PR on my ankle. To add to it, the words ‘Rejoice! We Conquer! is placed below the numbers. This is in reference to the man whom the marathon is in honor of, Pheidippides, who said those words right before he died.

I set a new PR back in April at the Kentucky Derby Fesitival Marathon and thought about getting my new tattoo then, but I got cocky. I felt great that day and had not really trained specifically for that race. It was just good weather, nice pacers, and me feeling well that resulted in such a great race. I decided to wait a few months to see if I could beat that new PR before I got the tattoo to save me some time and $$ at the tattoo parlor. Well, I still have not broken it, and it was time to get it done.
See, for the first time in 1.5 years, I am actually focusing on a future race.

In December, I am running the Rocket City marathon in Alabama. I am actually training for it, following a training schedule and everything. Yes, I am running 4 other marathons between now and then, but those will be treated as long training runs only. December is the attempt. I figured I am not going to break my PR until I get the darn thing put on my ankle, so that is why I finally broke down and did it. As you can see the ‘Rejoice! We Conquer!’ portion looks new, but it is not. When I got the new time placed on, my tattoo guy went over it again as it was starting to fade. We decided to leave the old time to fade, because that was a cool effect. As my PR’s slowly grow up my ankle, the older times fade into the past. Cool symbolism there, eh?
Posted by Doc Ott at 11:04 AM