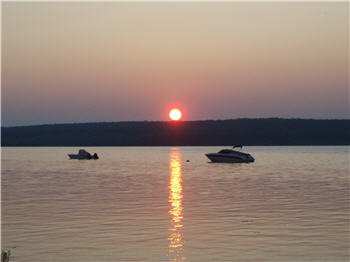 Well, I have now run more than a few races and have run some in some beautiful places, but never anything like this. The race is an almost complete circumnavigation of Grand Island, which lies in Lake Superior only a half mile from the upper peninsula of Michigan. For about 2/3 of the race I was within 50 feet of the edge of the cliff of the island. In some cases I was mere feet from the edge and I really did want to stop to take pictures. The race started up the east side of the island so the sun was shining brightly through the trees upon us as we ran. It was fun to look out across Lake Superior to the north, open and beautiful. The race started at 7, about an hour after sunset. The ferry got me across right around sunrise which just made my day.

It was a trail marathon which I have really only done once before, and it being 1 week after another marathon, I was planning on running this one easy and I set out to do just that. I had no plans for a fast finish, but went out at a fairly good clip since it was on hard packed dirt road. The main part of the island has a circumference of ~23 miles, so we had to spend a little time doing a simple out and back on the ‘thumb’ of the island. When we took that turn at about mile 4, it became a hiking trail hill that was fairly awful. At mile 5.5 we turned around and went back down the trail back to the main part of the island for the rest of the race. At two points in the race we actually had to run along the beach. On a beauty scale, it was an 11 out of 10, but on a running scale, it was a -1 because of the horrible footing. The night before at packet pick-up I heard one of the race officials talk to another couple about the beaches and said ‘people who run road marathons hate those beaches’. I smiled, because knew I would hate them as well and gosh Wally, I was correct.

It was a small race, yes, with a major ‘small town’ race feel, which I thrive on. After 5.5 miles I was in 6th place and remained there until mile 25 when I caught another racer. Had it not been for the ~25 people who started early who I passed slowly during the day I would have not seen a soul on the course (not including the wonderful volunteers at the 5 aid stations). In previous years, the trail has been in bad conditions due to weather, but this year the course was apparently as good as it has ever been. At race start the temperature was about 55 degrees and raised maybe 10 degrees during the next 3 hours. A nice breeze and partly cloudy skies and you have PERFECT race conditions. I think I might have slowed a little to just enjoy the day a little more. 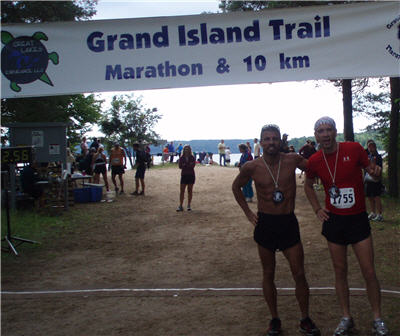 I was able to meet and chat with the winner and my true inspiration, Chuck Engle. Chuck is a marathon junky. He is faster than I, running marathons in the 2:30-2:50 range, but he runs them all the time. Last year he ran 52 and this year has done a few ‘doubles’ (two marathons in consecutive DAYS) He just enjoys running marathons. That is him in my finish line picture. He is very humble and extremely nice. Chuck and I are alike in that we just really enjoy the distance and run them whenever we can. He is faster, but not THAT much faster. He has a few corporate sponsors (which I would LOVE to have) to pay for his travels all over the place. I really do want to try to be like him.

The age award was the coolest I have ever gotten in my life. A large handmade multi colored glass disk with the race symbol on it. Very very cool. The cherry juice (made with local cherries!) just made my day even more perfect.

You might be wondering why I did yet another Michigan marathon as I try to get all 50 states, but this one was all about the timing. My family has a ‘gathering’ (not a reunion because we congregate at different places) late each summer and this year we met at the Apostle Islands in Northern Wisconsin. We just happen to be congregating the day after this marathon which was conveniently in northern Michigan. It’s all about the timing baby!

After the marathon on our way to the gathering, we stopped at a small town locally owned coffee shop in Escanaba, Michigan. When I asked for a mocha, I was told that they were out of chocolate. When I expressed unhappiness, the counter worker (who had to have been the owner) told me to ‘hang on a minute, I’ll be right back’. He left the shop on his bike, trusting me and the two locals in the place not to rob the joint. He returned about 5 minutes later. It turns out he went to the local grocery store and bought a dove bar, melted it, and used it to make my mocha. It actually tasted pretty good. Got to love that small town ambiance…
Posted by Doc Ott at 11:20 AM