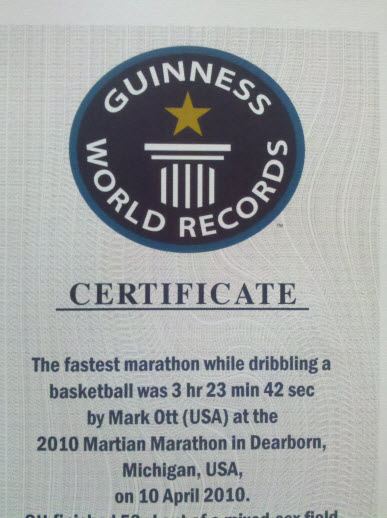 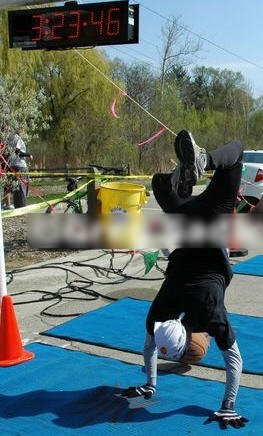 So lately, as I work along my struggle to complete marathons in all 50 states before I turn 40 (I will be at 44 states by the end of 2010, me age 38.5), I have been trying to find new motivation. My state chase is fun and exciting, but I needed something to mix it up. I have thinking about running longer races and signed up for a 24 hour race in April several months ago. Back in the winter of 2008-09 the weather was really cold so I started running in the JCC fieldhouse because I am a wimp and don’t like running in the cold (One bad experience, and it ruined cold weather running for me, go ahead, you can probably figure it out. I ‘ll give you a hint: I’m a guy) but the fieldhouse is not that big and the ‘track’ is <200 m long. As such, you get bored really quick. I decided one day to pick up a basketball and dribble, just to break up the monotony of the running. It worked as I made it through the off season still in great shape and went on to have a fast and successful 2009 marathon season.
So winter comes in late 2009 and it gets cold and again I am back into the fieldhouse, again occasionally dribbling a basketball, sometime for as long as an hour and a half. Sometime in Jan of this year I was dribbling along and got to wondering if there was a world record for fastest marathon while dribbling a basketball and what the record was. After my run and a few minutes researching, I come to find out the current record was 3:48, set by some guy in the 2009 LA marathon. The way I actually found out was finding the blog of a guy in CA who was raising money for underprivileged kids for scholarships and was training to break the record in March at the Napa Valley marathon, which, by that time, I had already signed up to run. I thought about making the attempt the same time he did, but decided against it, thinking it would be nice to let him have it (albeit briefly). I was looking at the calendar and saw the Martian Marathon in mid-April and thought it would be perfect for my attempt because it was near home, (only an hour away) well organized, (I ran the half marathon back in 2006) and very flat. I signed up and eventually got ‘permission’ from the race directors to make the attempt. I submitted the initial paperwork to Guinness and they sent me the official rules, how to certify the record (if broken) etc. I was all ready to go. The record attemptor at Napa Valley (I never saw him, only the spare basketballs along the course) failed, running a 4:20ish because of a bad fall at mile 14, messing up his knee. I felt bad for him, but good because I still needed to only beat a 3:48, slower than any marathon I have ever ran. 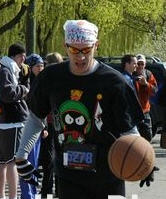 Being exactly one week before my first ever serious ultra marathon, the Martian marathon was at the end of my taper which was good. I was in shape, ready to go complete, with a brand new basketball. My Mother was in town for an Episcopal church meeting so I actually crashed at her hotel the night before (Thanks again Mom!) which was right next to the race start/finish. I woke up and followed all the standard race day procedures and made it to the race about 20 min before the start. A little chilly, but actually perfect race conditions. As has happened to me many times, moments before the gun I see Chuck Engle at the start. We chat, wish each other luck (he would actually win the whole race) and then we were off. A good, fast field of runners, and I started my dribbling. The only crowded place being that first 400m or so. People gave me a wide berth and at no point during the race did anyone bump into me. The first mile went by in 6:20 and I knew I was wrong, going way too fast so I slowed down and tried to get into a rhythm that I could maintain. People along the course cheered me on, some knowing was I was doing, many thinking they were funny making (lame) jokes. “Double Dribble!” “Where’s the hoop? “, “Between the legs, man!” I did not laugh at any such cracks. Had to focus. I lost control only 3 times. Each time stopping, going back to where I lost the dribble and began again. Also, I came to a full and complete stop at ever water station to drink.


My dearest Mistique was my support crew, finding me at several spots along the course with my spare basketball and a video camera to help document the record. As the miles went along I started getting really tired. Turns out my arms would not get that sore, but it just took a lot more energy than I expected. Your running stride becomes inefficient when you are dribbling a basketball, most notably my stride length getting shortened. I would end up losing 5 toenails after this race because of my toes slamming into the front of my shoe with every (short) stride. I ran a 3:23 but I had to probably do 10% more steps than a normal marathon.

I took exactly one walk break for about 400m right around mile 24.5, I just had to and knew I wanted to finish by running. I knew I had the record sewn up, so I had to rest just a bit before the final mile. I came across the finish line, stopped, set the basketball down, and actually did a handstand. I have no idea how I did, but the small miracle happened.

A very slow walk to the food area and I was just plain exhausted. It took quite a bit to get back to Mom’s hotel room where I took a quick ice bath for my screaming legs and then out to lunch with Misty and Mom. I had done it, and it felt good, but not as good as I thought it would. I now own a world record (not official, but soon, hopefully) Nobody on the planet has ever done this as fast as I have. Ever. That should totally make me happy, right? Of all my running accomplishments, I see this as just another one of a growing handful. 50 states. Under 3 hours (lots of times). Two marathons in one weekend. 100 mile weeks. 100 mile days. World record holder. I try hard to be humble, and fail a lot, but sometimes, you have the right to boast. Not sure if I am there yet, though
Posted by Doc Ott at 4:22 PM