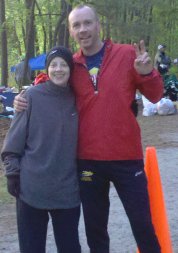 I have been thinking about what to do ‘next’ for a while. I have been knocking off marathon-states for a few years, and will be at 44 by the end of the year (fingers crossed) so I have decided to dabble into ultrarunning. I never really liked doing speedwork, which is now defined as anything under 10K, I just like going out and running and a nice gentle but solid pace (read: 7:30/mile) which is usually my recovery pace.

A few months before my first marathon back in 2006, I ran a half marathon just to see if I was going to die. I didn’t and it boosted my confidence quite a bit. A few months ago I signed up for my first 100 mile race, the Burning River 100 in July. Before I attempted that race though, I wanted to make sure I could run 100 miles and not die. A 24 hour race (where you have 24 hours to run as far as you can) was a perfect idea for a ‘test’ run.

I got to VA in time to take Friday ‘off’ just relaxing all day, in preparation of a long day running. I only ventured out to go grocery shopping for the race and to visit the USS Wisconsin, who sits permanently in Norfolk, VA.

This race involved a 3.75 mile loop at the Sandy Bottom Nature Preserve, a beautiful area in Hampton, VA. The trail itself was ground rock and I was very surprised that not once did a stray rock get into my shoe. Granted, one long section was near the interstate, and once small section near a stinky swamp, but every part of the course was beautiful.

I have a horrible habit of starting out races too fast (even marathons) and I knew I couldn’t do that this time. I had raced the previous weekend and my legs had not quite recovered completely, so I decided that when the race started I would walk the first 0.5 mile of the race. My goal for the race was to always be moving, never sitting down for more than a minute to tend to my feet. The first half mile of every loop was walked, all 27 laps. The other thing I did was consume some food every loop. A can of soda (no gastric distress! Yeah!), a handful of gummi bears, a bag of chips, a small snickers bar, whatever. Always keep moving. Time spend sitting is time wasted. Each loop I took a container of fluid and some food. This strategy seemed to work quite well as I never hit the wall, it was my swollen ankle that eventually stopped me. 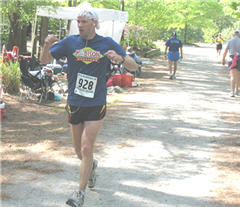 As I was getting near the end of lap 1, I came up on a professional ultra runner,Sabrina who ran a 17:21 at Umstead 100 miler 2 weeks ago. Sabrina was the model of even pace. We chatted until the end of lap 1. I took my walk break, and she moved on. I caught her with 1-1.5 miles to go each lap for the next 5. Pleasant conversation made the race go by nicely. She ended up dropping at just under 60 miles, complaining of not being fully recovered from Umstead.
My first marathon (7 laps) was done in just over 4 hours. Each lap was taking me about 35-40 minutes. The weather forecast was supposed to be clear, but it rained on and off for those first few hours, which really stunk. I never got really wet, just annoyed. By noon, the sun came out (mid 70’s) and was a little hot.

One of the big surprises of this race was how fast time went by. My mental preparation for this race seemed to have worked. Before this day, my longest run (ever) was 40 miles, back in March. Looking down at my stopwatch and it reading ‘8:00′ and me feeling ok was totally weird. “I’ve been running for 8 hours straight? Wow!”

My feet did great the whole race, I changed my socks and shoes at 40 and 80 miles. At about mile 20, I got a small blister on the side of my big toe (never had one there before) so I stopped, cleaned it, added some moleskin. My athletic tape wrapping and petroleum jelly cream worked like a charm. Losing 5 toenails from last weeks marathon probably helped me.

Second marathon done in 8:35, laps down to 45 min each. By then I was walking twice per lap, once at the beginning, and once about halfway in. Remember, that was always my plan. Never stopping, always moving. My legs were starting to fail, but I could still move. Afternoon slipped into early evening, and I started to get tired. Still no stopping for more than a few moments and my third marathon was done in 13:44. The sun was now essentially down and I started walking pretty much the whole time. What is interesting is that I was still moving pretty fast. The last lap that I ‘ran’ any portion took me about 47 min. My first ‘walking only’ lap took me about 52 minutes. I managed to keep that pace until the very end.

My goal for the race had always been 100 miles, which is just under 27 laps. With 2 laps to go, I actually took my first sit down break. I sat down and took my shoes off, but just for 5 minutes, then back on and back out. 100 miles in less than 20 hours, after that it’s all gravy. So I could stop and note it, I took my GPS watch for that 27th lap so I could stop dead on the spot that was 100 miles. At ~2:45 am Sunday, I reached that spot. I sat down, turned off my headlamp and contemplated my accomplishment for a moment (and to update my facebook status) before I got up and walked (slowly) back to the start/turn around point. I got back at 3:15 am, and had 4 hours to go. Having accomplished my 100 mile goal, I decided to take a long break. I actually headed to my car and turned on the engine, as I was now cold and not feeling well. My plan was to sleep until 5ish and then head back out to do one more lap to finish at 4 full marathons. When I woke up, my ankle was screaming at me, and it took little time to convince myself that I was done for the day, so I slept until 6:30. I had dropped out in 2nd place, and ended tied for 4th place. Once I woke back up, I felt better so I slowly tore down my little aid station (large box of food, my gatorade, lawn chair), grabbed my 100 mile plaque and got on the road. I had hoped to get a shower in before I left, but there were none at the park so I just took off onto the interstate, with tape still on my toes. I had 11 hours of driving in front of me, and thought there was a chance I could get home Sunday night. I had slept about 2.5 hours there at the end of the race and I made it about an hour down the road before I had to stop. I curled up in the back of my SUV and slept for a little over an hour. Made it another 2 hours along my way and then slept another hour. I hoped I could make it home before the sun set, as I have a hard time driving at night especially after what I had gone through the previous 36 hours. I made it home with about 15 minutes of daylight left. After tending to my feet I finally took a long deserved shower and then crashed.

I feel like a rookie, now having done my first 100+ mile race. I almost think it was too darn easy. I am sure I will run another one and I am sure I will get hammered in some future race, but this one seemed an easier effort that I ever thought it would be. Here, a day later my body is hurting but not much worse than after my worst marathon. Marathon. 26.2 miles. Who ever thought I would see that is a short run.
Posted by Doc Ott at 4:18 PM