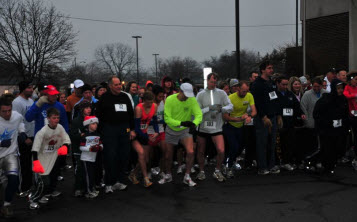 I was sitting on facebook last week, still recovering from my nice 100 miler mere days before and I noticed an event in my town, a little 5K on Thanksgiving morning, open donation. What the heck, I thought. I have not run a race shorter than a full marathon since June, and I knew I needed to get my legs some faster turn-over practice. Granted, I was still recovering from the 100, and I was going to be running a marathon in MD 2 days later, but that’s ok. I wanted to see how fast I could do it. Oh, did I mention that I had my 2 big toe toenails removed about a week earlier and they were still months away from full recovery? Yeah, I had no idea how I would do.

My running pal and former student, Joel Medina and I met up before hand to do a warm-up run. He was doing the 10K that day, so we did the 5K course as our warm-up. The temp was high 30’s and it was damp and overcast, but the predicted rain never fell, so it turned out to be a great day for racing. The course was a one large thin rectangle (1 block wide x 1.5 mile long) through western downtown Jackson. I saw some familiar faces before the gun, catching up with people which was nice. I rarely run these smaller local races, mostly because they almost always fall on weekends I am out of town running longer races. That will change, come next year as my state chasing goal come to a close.

5 min late and we were off, and I went out at what I thought was a comfortable pace I thought I honestly could hold. Mile 1 came by and my watch said 6:04, and I felt pretty good. Running a 5K is so completely different than a 100 miler or even a marathon, and I have never been really fast at this distance (I am mentally weak when it comes to racing, always have been) so when miles 2 and 3 went by in 6:06 and 6:08, I was tickled. At the last turn, I made the mistake of looking back and seeing a large gap between me and 3rd place, so I slowed a little, coming in with a 6:08/mile overall average.

The 3rd place finisher is a local friend, David Swarts who when her was younger, was an awesome CC runner (PR in the 15’s) and now is a world class race-walker. I had chatted with him before the race, swapping race/training war stories. It was pretty cool to race against him.

Cool race shirt, 9 miles worth of running (including warm-up and cool-down) on a nice brisk fall day. I got some much needed speed work in (well, MY definition of speed work, my muscles were sore for a few days) and then got to enjoy a wonderful Thanksgiving meal. A satisfying day for sure.
Posted by Doc Ott at 3:27 PM