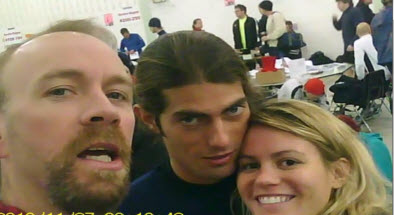 The Saturday after Thanksgiving of 2009 I ran a race in Mississippi and I lost to a nice guy from Erie, PA, Gary Krugger. In the ensuing year, we have become great friends, he has become an incredible marathoner, running one or two marathons every weekend all year (most around 3 hours), and has started dating another cool marathoner, Morgan Cummings. who is currently the youngest women to ever run marathons in all 50 states+DC. Several months ago we figured out that we were both planning on running the NCR trail marathon in MD this Thanksgiving weekend so we decided to carpool to the race. My lovely wife was also able to go, which always make my marathon trips more enjoyable.

Mistique and I left at 5:30am on Friday and picked up Morgan and Gary in Pittsburgh, then drove another 4.5 hours to MD for packet pickup. Morgan and Gary are really cool people, and you can tell they are totally in love with each other. It was so cool to see someone in a relationship as happy as mine is. Had Misty not been right there the whole time, I would have been sick with all the mooshy-ness of Gary and Morgan, but it was ok since my lovely bride was along for the ride. Our conversations were fun and lively, talking about racing and relationships, the miles went by quickly. It honestly reminded me of a nice long run done with a good friend, chatting and helping knock off the distance.

Packet pickup was unexciting, except instead of t-shirts, everyone got very nice heavy hooded sweatshirts. I don’t need any more technical t-shirts anyways. We then headed to a Gary’s former bosses’ house which was only 20 min away from race start. Joe is a really nice guy who lives in a beautiful ‘empty nest’ home. I love staying with people who have grown children who have recently (in the last few years) moved out, because they are the best hosts. They are just so happy to have someone staying at their place, they go over the top to make them feel welcome and comfortable. I had that in Portland, OR, staying at Morgan’s house, and it was awesome then too.

Because everyone is so sweet and I am the only person who has a tight pre-race meal ritual, everyone was ok with a 20 min drive to the nearest Applebees. Gary’s diet is horrible. Cheese pizza is a staple of his, especially the night before races. He will also tell you that he has had to stop to poop 4 times during some marathons. I have tried to convince him there might be a connection and maybe he should try something else the night before a race. Luckily, Applebees does not serve pizza, so he ate spaghetti, and sure enough, he never had to stop during the race to poop. And even better, he managed to run his 32nd state in less than 3 hours (just barely, his official finish was 2:59:48)

Race start was not until 9am, so we all got to sleep in, which was awesome. A little confusion of the GPS got us to race start about 8:10, and the weather had us a little concerned. Gary does not have much meat on his bones (he is my height and 20+ pounds lighter than me, and I am not too big) and does not do well in cold conditions The temperature was in the mid 30’s but the wind was starting to pickup and predicted to be in the 18-20 mph range during the race. The course was mostly along a beautifully wooded trail (another railroad-repo trail) with hills and valleys on both sides, which meant the wind was swirling all day long. You would have nothing for a quarter of a mile then get hit head on with gusts for a half mile. Totally unpredictable which kindof stunk.

Gary took off and left me behind, but I knew I would be slower than him anyways. 9 days before this race I had a date with my Podiatrist and he removed (permanently) my two big toe toenails which will take 8-10 WEEKS to fully recover, so 9 days after, they were still quite raw and tender. Vicodin. Yum. Oh, and my other excuse was that I ran a sub-19 5K two days earlier, so my legs were actually still sore from that speed workout. I ran a 100 miler 2 weeks ago, too. Ok, enough excuses, but I have some more if you want ‘em. 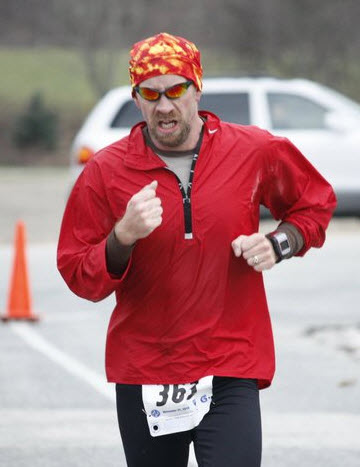 I went out in what I thought was a comfortable pace. The first mile (paved road, downhill) was a quick 6:40, and I knew that was too fast. Once on the trail after ~2 miles, I got into a 6:45/mile rhythm which was fast, but I felt good. I have started out too fast before, but not felt this good. This course is considered fairly fast, and I could tell. Good footing, beautiful views so it was easy to see why people run strong here. At about mile 10, I started to slow a little, as my sore legs were getting to me. I hit the half marathon point 1:29:57, so I knew then that my chances of running sub-3, where slim. I have not run a sub 3 marathon in awhile (I haven’t tried though, this year striving for quantity, not quality) so I slowed a little more, deciding to enjoy the scenery. I had my iPod with me the whole race and was running by myself most of the race, but never turned it on. For some reason, today 3 hours of listening to nature was enjoyable. That almost never happens.

As I neared the turn around, I saw the leaders and Gary, who looked strong. I like out and backs because you get to see people on as you cross paths, which is always a little motivating, especially when you are starting to get tired. When I finally saw Morgan she had her pleasant smile on, like she always does, but I later found out she really was not in the mood to run today. She finished, but hated the run. It happens. She is still recovering from a hip injury earlier this year, so her motivation of late has taken a huge hit.

It being an out and back course, the last ~2 miles were back on open roads. Uphill. Into the gusting wind. The course was one of the most beautiful I have ever raced on, except for the last 1.5 miles. Just before mile 25 was a long steady hill, probably 300 m long. It sucked your life energy and then you still had 1.2 miles to go after that. For me, that last 1.2 miles took me almost 11 min. Yeah those hills sucked. It reminded me of the two massive sets of stairs in the last 3 miles of the Burning River 100.
Misty had fallen asleep in the car while we raced and woke up right at 3 hours into the race. She missed Gary’s finish, but managed to get to the finish line just minutes before I crossed. I really love it when I cross a finish line and she is there. It makes me feel so warm and fuzzy inside and after this cold race, I needed that. We went back to the elementary school hosting the race for some good food and warm air. We found Gary and he looked rough. Really rough. He was so cold he stopped shivering, and that’s bad. We got him seated, tried to get some liquids in him and got some medical personnel over to check him out. As I said, he does not do well in cold races, and he was not doing well here. It was about 45 minutes until I felt he was back amongst the living.

Once Morgan got back to the finish we gave her some time to get some food and recover before we stopped back quick at Joe’s to shower (and have some food he laid out for us) before driving to Pittsburgh to drop Gary and Morgan off at Gary’s car. Originally Misty and I were going to drive all the way back to Jackson on Saturday, but as it was, we didn’t get to Pittsburgh until 8:45 pm, so we decided to get a cheap motel room for the night and push onto Michigan first thing Sunday. A good choice, for sure.

This was an awesome weekend, getting to spend a wonderful time with friends, run a pretty (but cold) race, and knock off state #45. At 90% of the way to my goal, 4+ years in the making, I am starting to see the end of a very long journey.
Posted by Doc Ott at 3:24 PM