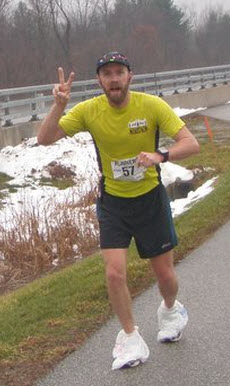 A few months ago, one of my good friends, Ryan Miller, who lives just north of Detroit, decided to organize his own marathon. To be cheeky and increase the popularity, he decided to do it on Jan 1. The ‘Fat Ass’ in the title of the race tells you it is unsupported, no t-shirt, no entry fee. He did some PR work and got us numbers and some loot including some Nuun brand electrolyte tabs. I have needed some electrolyte replacement something for a while and I tried these and they seemed to work great.

The location was beautiful Stony Creek Metropark just north of Utica, MI. There is a 6 mile bike trail that goes around the entirety of the lake so we did 4 loops and then a small out and back at the end. I signed up for it knowing that in mid Feb I am doing a 100 miler outside Buffalo, NY, so I thought a Jan 1 race outside Detroit would be perfect with cold, snow, and wind. That’s all great in theory. unless mother nature gives you a quick warm snap right before the race. On race morning, the temperature was a balmy 45 degrees with 5-10 mph winds. Oh well. After 1 loop I ditched some clothes and was down to a short sleeve shirt and shorts. Of course, then on that second loop, halfway around the loop the wind picked up and it started raining. Brrrrrr.

You would think with only 17 people in the race, I might have a good chance to win it. Ha! 1.5 miles into I was caught by a nice guy, Rich Power whom I met before, back in July of 2008 at a marathon in Ontario. He finished 2nd to my 3rd that day. He is much faster than I (He ran the NY marathon last fall in 2:46) so I knew I would lose to him. Also, he had home field advantage. Turns out, this the path he does his long runs on and he knew many of the people who were just on the path for a run. After 2 laps (~12 miles) down in 1:25 I slowed down as I was getting cold and was not after any speed records.

This was a fun little race. Good people, nice course, awesome weather (for the season) and an awesome start to my long-haul year of 2011.
Posted by Doc Ott at 3:18 PM