I have been planning on this trip for a long time, probably longer than any other race I have ever run, since it is in one of the most beautiful states. Hawaii is wonderful, especially when Michigan is getting slammed with snow and I am on my honeymoon (part II).

Mistique and I were married back in late June of this year and our honeymoon (part I) was only a few days staying in local bed and breakfasts. That was nice, but certainly not the trilling memorable honeymoon most people have. I promised to take her to Hawaii in December for a more ‘traditional’ honeymoon, and this was that trip.

Misty is also a ‘speed tourist’ so only spending 4 days in Hawaii was fine by her. We took off from Michigan early Thursday morning and got to Oahu that afternoon. It was rainy so there was no sunset to speak of, and we were asleep by 7:30pm local, which is 1:30am ‘body time’, well past our bedtime. 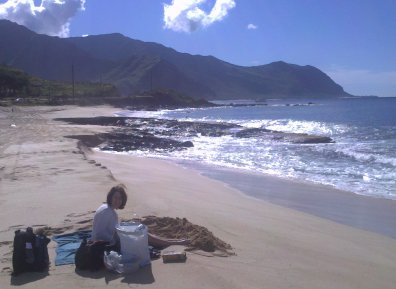 On Friday it was still cold, rainy and windy but we braved the bad (for Hawaii) weather and did the whole Pearl Harbor thing, touring the USS Missouri and USS Bowfin. Both were pretty cool, and I learned a little more about WWII that I did not now. Saturday was the ‘do nothing and sit on the beach all day’ day of our trip. Right about the time we got to the beach, the last of the clouds left and so we sat on the sunny beach and did nothing for over 5 hours. It was awesome.

Race morning came early (2:30am) Sunday because it was 5 am start and with 20,000+ runners who needed to be bused to the starting line, we had to be there early. Luckily the busses were picking people up about 1.5 blocks from our hotel. The loading seemed to go smoothly and we were at the starting line just over an hour before the marathon start.

Misty is a walker (not a runner) but there was a 10K walk associated with the marathon. When we went to the race expo on Friday, we quickly realized that the 10K walk is just a money making machine. The marathon organizers seemed to have slapped it together not really caring. They saw it as a chance to get some money out of those relatives who traveled to Hawaii with their families by giving them something to do while everyone was running the marathon. A $70 entrance fee (for the 10K walk) got you a so-so t-shirt, aid stations that were out of water (the first 10K of the marathon was the walk course) no official time, a lame finish certificate and a cheap hand held fan. Misty made several comments about how the walkers really weren’t even walking, more like a Sunday stroll. She believed she was one of the first (of thousands) of walkers to finish and she wasn’t even racing. In fact, the walk started while marathoners (the slow marathon walkers near the end) were still crossing the starting line and she passed some marathoners during her walk. She even noticed some marathoners stop at the Jack in the Box and get some food. Ya see, there was no real cut off time for the marathon. I think I read somewhere that they were going to shut down the finish line at 4pm. That’s 11 hrs after the start. Yeah, this one was different. 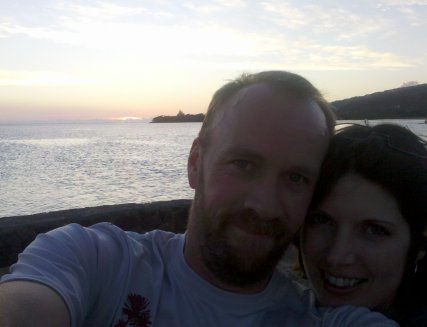 Ok, so the marathon had its issues too. The first was even before the race started. At races this size (>20 thousand runners) you want to ‘seed’ the racers (forced or self selected) such that you do not have people having to weave around slower runners in the early miles. The Honolulu marathon choose the self selected method, putting up large banners and volunteers with ropes with predicted finish times spaced behind the start line, a similar tack taken by dozens of races I have done before. However, the first rope barricade (2-3 hours it was labeled) was a full 100 m from the start line, and nobody was policing that 100m, so it filled with people who had no clue the race was trying to get people lined up by speed. I realized this about 4 minutes before race start where I was sitting dutifully behind the 2-3 hour rope. I started to move up and got about half way through the leading crowd before I was essentially stuck due to concentration. It was easy to look around and realize most of these people would not be running under 3 hours. When the race started (Fireworks! Cool!) I was bobbing and weaving for about a half a mile getting around a huge sea of slow runners. I felt bad for the sub 3 marathoners who stayed behind the rope.

I had recently noticed that I have not run a single sub-3 marathon in 2010 (I consciously chose ‘volume’ this year) and thought it would be nice to get at least one. I did take a few days off right before the race (a half hearted taper attempt) hoping I might pull it off. When I was doing 6:40/mile average at mile 5 and starting to get tired, I was convinced it probably wouldn’t happen, and I was right. What is interesting is that both my half marathon spilt (1:30) and finish time (3:10) were both within 1 min of their equivalent times for my last marathon, 2 weeks ago in Maryland. I thought that was kindof interesting. I have the physical prowess to run a 2:50 marathon, but I have the mental toughness of a 7th grade weakling. I am quite mentally weak when it comes to racing (always have been) in that I am quick to slow down because I am tired. I know it sounds weird, but I think it has made me a strong ultra runner. That doesn’t involve speed per se, just stamina, and my training is just that, going for long times and not stopping. I hate speed work, always have. But, I can do 120 miles a week at 7:45 pace, week in week out. It looks like that will be my niche. I have accepted my weakness and chosen to exploit my strengths. Isn’t that we are always supposed to do anyways?

The race started at 5am so A) they could have the course open forever (11 hours!) and B) so you could get some miles in before sunrise. It turns out, I did not have direct sunlight hitting me (sun finally over mountains) until mile 17, and then it just sucked the life energy out of me. The temperature at race start was low 60’s and it was upper 70s by the time the sun started cooking the runners. I knew I had slowed down a bit, and at about mile 20 I realized I had to pick it up if I wanted to stay under 3:15, my standard do-no-slower-than-this time.

There were a couple of sections of out and back and since I was coasting then anyways, I tried very hard to spot and acknowledge every marathon maniac I saw, in the end about 20 of them. About 10 minutes before the race began a small crowd of us met near the front for introductions and picture taking (a common practice) and it included Maniac #0001, President Steven Yee. That was pretty cool, I must say. There are now over 3000 Maniacs, me being #1090.
It turns out this is a very popular ‘destination marathon’ which is no great surprise since it IS Hawai’i, but not so much for Americans but for Japanese. Turns out over 60% of the runners come from Japan, many coming via one of three major tourism companies. That is fine, but the rest of us yahoos were kindof given short shrift. There were HUGE area/tents set up for those groups, each with their own post race food and party atmosphere. For us regular folk there was (what was labeled by signs as) the ‘food court’ which was comprised of exactly 3 items, red apples (ick!) dry oatmeal cookies (blah!), and water. That’s it. No more nothing else. Oh did I mention they did not give out race shirts at packet pickup like every other race I have ever run that had an entry fee? Turns out they SELL several different shirts (and bags, cups, socks, etc) at the expo, all saying 2010 Honolulu Marathon, but they only thing included in your _$140_ entry fee was a t-shirt IF you finished. You would think the t-shirt pickup (and finishers medal which was of average quality) would be right next to the finish line. Nope, it was on the other side of the huge park (beyond the tour group areas) about 600m from the finish and not very well marked. It was as if they didn’t want you to pick up a shirt nor a medal. The finish line treatment of the marathoners and blatant disrespect for the 10K walkers, both groups having paid a pretty penny for entry made me a little upset. I have been to smaller races with entry fees 1/4th this amount and gotten TWO t-shirts, an awesome finisher’s medal, and good quality/variety post race food. This race was a money grab from the get-go. After 39 years it is all about profit and not about quality, you could tell. They know people will come out because it is Hawai’i, so they don’t need to impress us.

I am so glad I had Mistique with me, for it was her that made the trip memorable and way fun. The marathon, sadly, will almost be an afterthought of this great honeymoon weekend. One final note, while it was 80 degrees and sunny where we were, the Midwest got slammed with a nasty snow storm and schools were closed all over Michigan the day we flew back. A full 70 degree shift in the high temperature of the day between Hawai’i and Michigan. At least now I have snow to train in for my next 100 miler in February.
Posted by Doc Ott at 3:20 PM