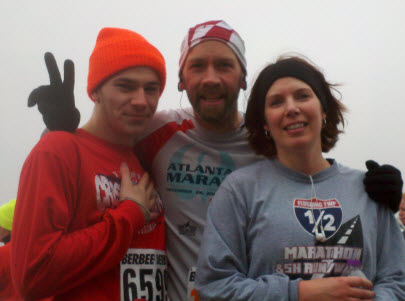 Thanksgiving, a time for family and food. With our kids at their ‘other parents’, Misty and I decided to head back to the Madison area to spend turkey day with my parents and my sister’s family. Since thanksgiving involves a lot of eating, Misty and I decided to do the Berbee Derby races to work off some calories before we sat down to a good meal. We even convinced my nephew Michael to join us. For the record, he ran this race with me back in 2006. Boy, he was young then. There were three of us, and there were three races, so we spilt up. I did the 10K, Michael did the 5K, and Misty did the 5K walk.

Since there was 3 races and this is a big city, there were thousands (>7) of atheletes plus a zillion spectators at the start, including my 72 year old mother. We got there about an hour before the first race began and it was a little chilly, but the wind was what made everyone so cold. Lets say I was glad when the race finally started so I could warm up.

While the temperature was in mid 40’s the 15-20 mph winds made for a struggle of a race. With it at our backs, no problem, but then after certain turns you were right in the teeth of the wind. I was near the front, so not a lot of people in front of me to act as wind breaks. A few sections were through the woods, which broke it up a little bit. A nice course mostly on roads, gentle hills, some spectators.

The toughest part of this race was my pace. In the 118 races I have run in the modern ear (since 11/2005) this is only my second 10K. I really have no idea how to race this distance, so I did something stupid. I started out in my 5K pace. My first mile was ~6:05. Yikes, way to fast. I slowed down a little, hitting the 3 mile mark at 18:30. I just tried to hang on, every once in a while trying to keep pace (for a little while at least) with someone who passed me. I wanted to break 40 minutes, which I did, but only by busting my butt the last half mile or so. After I finished, I said ‘Hi’ to my Mom and then (as usual when Misty does the walk) ran the 5K course backwards until I found my lovely wife and then walked with her until the end.

One good thing about being such a large race is that I knew I did not win any age group award so we took off mere moments at the end of our races and headed home to finish prepping for turkey dinner. Misty had done much of the prep before hand so it was not too stressful, and boy was that meal delish, especially since I knew I could do it guilt free. A fun race with family I love. A very thankful Thanksgiving day, for sure.
Posted by Doc Ott at 1:21 PM