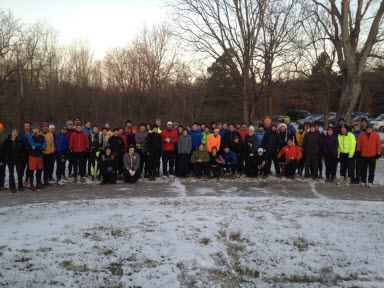 RUT is a local (meaning Ann Arbor area) running group that promotes running, especially the ultramarathon variety. In the last few years they have been promoting a series of Fat Ass races. For those of you uninitiated, Fat Ass races are free, and have minimal support, no shirts (usually) no awards, no frills. The key is that first one, free. tell runners there is a free race but ask them kindly to bring some food to share for the racers and you get an AWESOME spread of food. from homemade cookies to fresh fruit to your standard ultra fare. That’s what we had this day.

There ended up being 91 people on this cold day (~21 degrees at race start) but the course was in good shape (less than an inch of snow for the most part) and everyone was in great spirits (Hey, its a free race!) at 8am when it was start.

The course was essentially the same as the summer FA I did back in August two weeks after my difficult BR 100 run. That me it took me over 4 hours to do a marathon distance, and this day iw as feeling much much better. I am now deep in training (well, sortof) for my next 100 mile race in January, so I decided to make this a long training run since it was well supported and lots of other people running. I had hoped to do 40 miles, but because I had to get on the road in time to pick up my daughter in Indiana that afternoon, I had to bail after 34 miles. It was still a good hard workout.
The first loop (~13.6) was gentle and easy and after a few miles I got into a steady pace with two other guys, Brian and Eric. Smart guys (one microbiology grad student, one computer geek) and good conversation abounded including quite a but of banter on educational philosophy. Brian dropped back near the end of loop 1, and Eric and I stayed together through the transition (~5 min stop at start/finish for food and costume changes) and about 4 miles into the second loop. We had been doing 8:40ish miles up to that point which was slower than I wanted to do, but the conversation was worth the drop in pace for me. Eric cut me lose and I picked up the pace a little bit after that.

The course is well worn mountain bike trail that had a lot of roots on it. I tripped 5 times total, only once going all the way down. That time, I spun to fall on heavy grass loaded with snow so it was a gentle tumble. After the first hour, the temperature had picked up to almost OK, so it ended being a great long run in the woods. A good training run with old and new friends.
Posted by Doc Ott at 1:20 PM