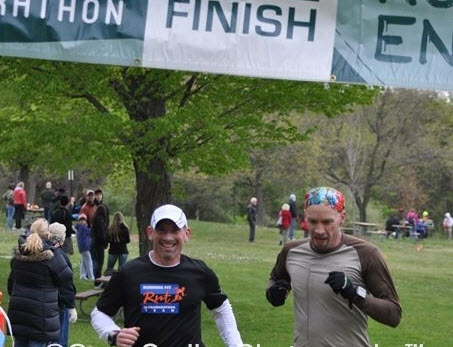 So the trail marathon has been around for a few years and they have had a half marathon associated with it as well but to be a little different, they decided to have the massive (>850 runners) half marathon on Saturday and then the trail marathon and 50K on Sunday. With races on consecutive days, why not take more of people’s money and have them run -two- races. What was born was the ‘No Wimps Challenge’. This is the toughest 13.1 mile loop I know and having to do it once on Saturday and 2.5 times on Sunday, I knew it would be tough but fun, so I signed up for the half/50K set and tried to run the two races ‘smart’, which is something I am still working on it seems.

The famous ‘poto’ trail is quite rough. There are zillions of small hills, a handful of long ones, everywhere roots, rocks, uneven terrain and even sections of sand just to change it up. It is maintained by a local mountain biking group and they like (for some reason) to have a bumpy ride, which is why the course is so rough. There are few sections where you can stretch your legs out and get into some semblance of even pace so the course is just brutal all the way around. No PR’s are ever set here. 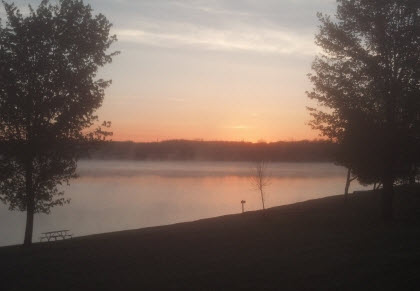 I got to the race venue about an hour before start in time to see yet another beautiful pre-race sunrise and met up with some friends including Pizza dude, Matt. He and I run marathons at roughly the same speed and since he had run a 100 mile race 2 weeks previous, and me running a 100 3 weeks previous, we decided to run together for the half. He had indicated that he wanted to run the half marathon hard and then go easy on the 50K, and I sort of wanted to do the opposite, so our pace for the half worked well together.
We started out together chatting a little and I left him behind about mile 3, but then he caught up with me at mile 7 and then left me behind for a mile or so and I caught up and we ran the rest of the way together. I have run with Matt enough to know the man does not have any idea what the term ‘even pace’ means. His pace was going all over the place which was driving me nuts. I enjoyed his company enough, that I didn’t mind his erratic speed. 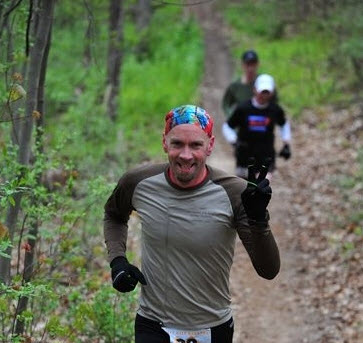 There were four aid stations on the course, reasonably well spaced. Matt’s wife, Paula, a really good runner in her own right, was at one station and had been telling people for days that she was excited to throw gummy bears at me when I came by. Sure enough, when I came by she grabbed the bag and started whipping them at me. I stopped and said ‘Can i just have one handed to me?’ and she obliged. All the folks at the aid stations were of course awesome and helpful, but I anticipated nothing less. There is a special place in heaven for aid station workers..
So Matt and I were going along at a good 7:45ish pace feeling like we were going to finish well and at about mile 11 two guys caught up with us and we found out one of them was in our (35-39) age group. Well, Matt and I didn’t want to lose that place, so we stepped it up a little bit, leaving them at the last long hill. It worked so that at mile 12 we glanced back and saw we lost them so drew it back a smidge. There was no prize money, so we were fine. When we ran together on Jan 1 at a friends Fat Ass marathon, we decided to cross the finish line at exactly the same moment for the ‘tie’. We decided to do the same thing here with no sprint to the end, but instead just trying to cross as as close to the same time as possible and let the computer figure it out. Turns out, Matt beat me by 3/10ths of a second. The difference between 3rd and 4th in my age group was the length of my arm. Oh well. 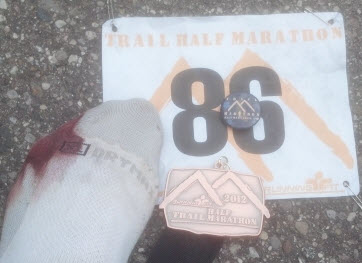 A rare 1/2 marathon finishers medal as well as a cool age award mug completed the haul. I also got some blood on my toe. Seems I leaked a bunch of blood out of my pinky toe, enough that the show was a nice red near the wound. It felt fine during the race,and would only bother me the first 10 miles of the next day’s race.
I had to get going soon after race end as I had to make it back to town for Commencement ceremonies at the college I teach at. I did manage to have enough time to stop at Applebee’s for my post-race/pre-race meal. I am not sure if I was replenishing from the half or prepping for the 50K. Either way, the meal was delish.
Posted by Doc Ott at 11:43 AM