So, now for the fun run, the second in the weekend of the ‘No Wimps’ Challenge. While I have done ‘doubles’ before running marathons on consecutive days and a few Hundos, doing a half marathon and then a 50K the next day on rough trail is a little different,. You don’t totally sluff of one. I didn’t wimp out yesterday, but I saved some in the tank for the 50K, as ultras are more my thing. I thought of the half marathon as a warm-up race.

I slept well, after a good run the previous day but had to get up a little earlier to make the 7:30 am start for the 50K. As I was pulling into the parking lot, the temp was 29 degrees and would get up to a whopping 32 at race start. Since I knew the temperature would be 60 by race end, I actually had to think about what to wear. For the first time in a while, I wore an outermost layer of a cotton t-shirt knowing that I would ditch it, which I did at mile 4 aid station. I also wore my nice nike rain jacket which folds into itself as a nice pouch that I took off after the first 13.1 mile loop. There was no real wind, and no clouds either which made for beautiful race weather. It is days like this that I love living in Michigan. The winters can be a little harsh, but spring and summer are gorgeous.

The 50K involved doing the half marathon course (same as yesterday) twice and then a quick 5 mile loop that met up with the 13.1 mile loop the last 2 miles. I ran lap 1 a little too fast, which is no surprise. I met up with a local running beast Ryan C at about mile 10 and ran with him until the end of lap 1 (13.1 miles) which I crossed in 1:49, only 6 min slower than the previous days half marathon. Ryan then took off and finished in 4:12 which is awesome, expecially considering he took a wrong turn and added some distance to his run. I knew that my first loop was faster than I wanted to go, so as soon as I started my second long loop, I dialed it back a little bit, finishing loop 2 in ~3:53. My goal for this race was to run smart, which I like to think I did. I knew this course was brutal, especially doing 31 miles on it. Up, down, concentrating so hard not to trip, etc. I wanted to make sure I did not take any walk breaks, which for this course is tough, especially the one hill (done 3 times) about 1.5 miles from the end of the loops. I was successful in that endeavor, while trudging slowly up the hills all day long, never slowing to a walk. That is a victory in itself, if you ask me.

After I came through the 26.2 mile point, I still had the 5 mile loop to do. What was cool is that about 400m into that 5 mile loop, I got a little spring in my step. I didn’t speed up that much, but my mental state was much better. Here was more evidence of my ‘not trying hard yields better results’ theory. I think my long hard 30-40 mile training days paid off as my body was not tired at all, even though I was 39 miles into my 44 mile racing weekend. 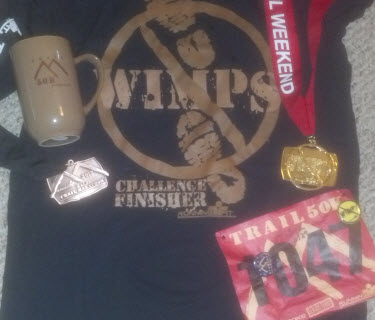 I crossed the finish line and felt great. The handstand was one of my nicer ones, being able to hold it for at least 5 full seconds. I got to then collect my hardware including another mug for 2nd place in my age group, a 50K finishers medal, and then an additional medal for completing the ‘No Wimps’ challenge as well as a t-shirt for the feat. There were several of my RUT friends who also completed the series as well, all good folk.
I stayed around to watch many of them finish or at least come through the marathon point in the 50K. Everyone seemed happy in their efforts today and were in good spirits. This is what trail racing is supposed to be. Pure energy and fun for everyone. I said my goodbyes to those who were there and headed home to spend the afternoon with my lovely wife and a good meal. A wonderful finish to a long but very fun weekend of racing.
Posted by Doc Ott at 11:41 AM