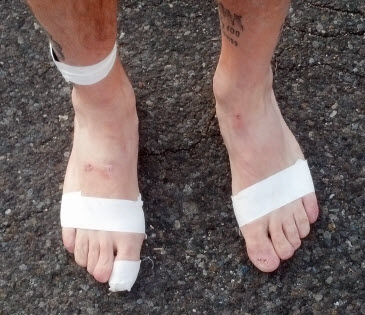 While you might think that this is just another boring race report of my local Thanksgiving morning 10K race, you would be wrong. Yes, it was my local Thanksgiving day 10K race (along with 5K run and 5K walk events) but I would be doing this one without wearing shoes.
A few months ago I started the slow transition to the minimalist/barefoot philosophy. While I ran my first ever marathon in a minimalist shoe (Merrell Road Glove) a little over a month ago, this race was my first time racing without any protection on my feet, and on asphalt no less. Even barefoot running ‘purists’ warn that while humans ran barefoot for eons with little problem, our cave-person ancestors were not running on asphalt.

Before I signed up for the race I needed to decide if I was going to run the 5K or the 10K, entries fees being the same price, a mere $20. I knew I was going to run it barefoot so I thought I should maybe beg off and just do the 5K, especially since I was going to be doing a tough 33.3 mile trail race the next day in minimalist shoes.

As I was trying to decide which race to do, I mentioned the idea to my 12 year daughter and she said to me “If you’re gonna do something crazy, go all out, Dad”. So with that little conversation, I decided to go for the 10K race. It seems only my mother would have told me to do the 5K. Actually, my mother would have told me to not do it barefoot at all. When I told her later I was going to run is sans-shoes, she gave me that 73 year old mother heavy sigh over the phone. So predictable she is sometimes…

When I showed up to pick-up my race packet race morning I found out it was a chip-timed race. Ya know, one of those things you string through your shoelace? Yeah, I didn’t have one of those, so I ended up taping the chip to the side of my ankle. A position I later found out was not optimal. (read: it didn’t work) 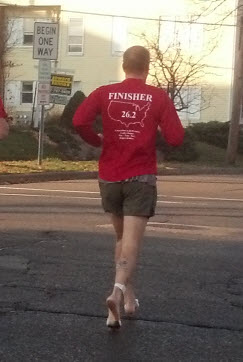 The reigning 10K winner (2 years running, actually) was local phenom Joel Medina. Not only is Joel a great runner and a former student of mine, but he is also a really nice guy and a person I am proud to say is a good friend. We ran the 3.1 mile loop with another local running legend, David Swarts. Actually, David is a race walker and completes at the national level winning all sorts of awards including several national championships. Great guys that I am glad to know and so of course our warm up run was fun as we talked about our training amongst other running related banter.

I ran the warm up in my VFF’s but tried very hard to watch the road to make note of any areas I should be careful of come race time when I had nothing on my feet. Asphalt is pretty crappy to run barefoot on, but with rocks, potholes and broken glass it can really suck. Luckily I saw no major areas of concerns, though all the turns seemed to have quite a fair share of small pebbles which are annoying. I would end up taking them all very wide and gentle.
As race start got close, the air temperature was in the mid 40’s, but the asphalt was probably closer to mid 30’s. My feet never got numb or even that cold except when standing around before and just after the race. While waiting for start, I found my lovely wife and chatted with her while as I stood around in my homemade huaraches (http://docott.com/sandals) while people stared at them. About a minute before the gun I took them off and gave them to Misty as I would see her a few times during the race. She would hold onto them just in case something went wrong (if I stepped on a piece of glass for example) and I needed to put coverings on my feet.

The balls of my feet was very tender before the race so I put a strip of duct tape on them to give them just a hair of protection, but that was it. My only real goal was to finish still barefoot and not hurt myself. If I finished under 45 minutes, that would be even better. I certainly did not think I would break 40 minutes. You have to remember, I never train for races anywhere near this distance. I still think of marathons as ‘sprint’ races.

When the gun went off, I just tried to get into a comfortable stride, knowing that every step was going to be a little uncomfortable. About a half mile into the race, I realized how easy it was feeling and decided right then that I might as well try to ‘race’, meaning put some real effort into the run. My bare feet didn’t seem to be actually slowing me down so I bore down and took off. I need more practice with the faster leg turnover and I certainly never want to run this fast in training, so why not?

My daughter was staying at her mom’s house the night before which was only a block away from the racecourse, so she decided to come out and see me run. That is always a great motivator. She is a really good cheerleader, actually. It was her fault I was having to run 2 loops, so she should be out there suffering in the cold, anyways.

As I came through the first loop in the low 19’s, I was welcomed with a lot of cheering. Many people had seen my bare feet before the start, but now they were excited as the barefoot guy was near the front of the pack. About halfway through my second loop I came upon the 5K walkers so I had to do a lot of slaloming which was tough because of the ground and how I didn’t want to run in potholes. Some people were kind and sortof gave the 10K runners an open column to run by, but others who were walking in large groups which took up most of the road. I have heard many a marathoner complain of similar instances in larger races. No offense, but just because you got your entire family to join you for the walk, doesn’t mean you can take over the entire width of the course. 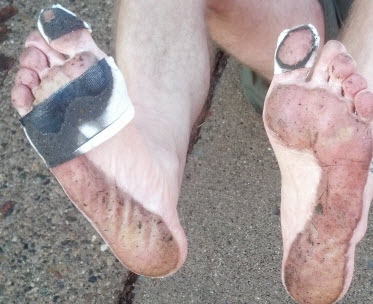 I had forgot my stopwatch in my car, so I did not have my run time, but the race clock (zeroed to the start of the 5K race ~3 min after I left) read about 36:15 as I crossed the finish line. I had looked a few moments before I actually crossed so it was certainly not exact. No problem, I had a chip on my ankle, right?
When results come out, there is nothing listed. Not only was I nowhere to be found, Joel wasn’t listed even under the 10K results and he won the race. Again. Turns out they were having horrible issues with the timing system with people’s time being put down for the wrong race and such. My timing problem was because the orientation on my ankle (on the side) made it such that the timing mat never saw me. After some detective work and photographic evidence provided by my lovely wife, it was determined my time was close to 39:15. No prize money or records broken, so I was ok with a small error bar on my time. It was way faster than I had expected to run, so who was I to complain.

My feet did quite well and were just really tender afterwards. After some parting goodbyes to friends, I headed home to a hot shower, lotion on my feet, and a wonderful turkey dinner with my lovely wife. Truly a most thankful day!
Posted by Doc Ott at 5:45 AM