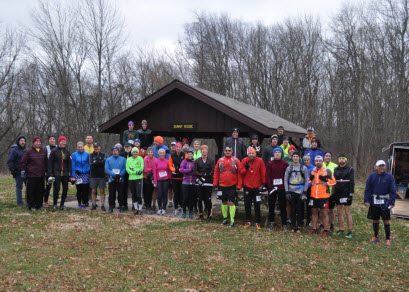 In April of 2013, I will be running the inaugural Indiana Trail 100 (aka, the IT100) in Albion, IN. The race director for that race is trying really hard to pull of a great race and has been having several training runs on the course. He decided to have a 50K(+) Fat Ass race the day after Thanksgiving and invited people to come down and do two loops of the 16.6 mile course. Next spring, we will do the loop 6 times for a total of 100 miles, but this time it was just twice around for a cool 33.3 miles. Had it been be, I would have called it the Indiana Trail Vinyl Race. If you have ever owned a record player, you should get that joke.

I have several friends in southern Michigan who are planning on running the IT100 next year as well and they also wanted to come down for course familiarization. We decided to make a big fun road trip for five of us.
So with the race a pleasant two hour drive from my house, and a 9 am start, friends Catherine, Ryan, Andrew and Mark all met at my house a little before 6 am Friday morning fresh with ‘turkey hangovers’ and headed out. The drive down was fun as we talked about running almost the whole way, often giving details about our bowel movement history associated with trail running. We all decided that marathoners almost never discuss such topics, but it is an amazingly common topic amongst ultramarathoners. I have no idea why, but it probably has to do with our general quirkiness.

We arrived about an hour before race start and did our usual pre-race stuff. We chatted with other runners, laughed about the weather, prepped out feet and places we chafe, and even took a group photo. One of the most fun things was that several runners who I didn’t know but knew me came up and started chatting. That pretty much never happens. I guess I am starting to get some ‘street cred’ in the ultrarunning community which is something I never really thought I would ever get. It made me feel warm and fuzzy inside, I must admit.

While this was a FA race, it had all the trappings of a real (albeit small) trail race. It was chipped time to test the entire system (including timing mats at all the aid stations for splits) and the aid stations were totally legit with many standard choices of food. At the start/finish point there was lots of food as well as some free samples of a blister guard product. This was by far the most awesome free race I have ever participated in.
The race took off right at 9 am and the wind was howling already 15-20 mph with the temperature in the mid 30’s. We were told that once in the woods, the wind was not too bad. They people were wrong as it was very windy for about 75% of the run, maybe more.

I was in the front very early but was passed within the first mile or so by 4 people who were only planning on doing 1 loop. I would eventually pass them all at about mile 13 as they stayed near each other at a good clip. I slowed down a little that first loop, so that means they slowed down more than I. Nobody was looking for fast times, just out for a good run, so no great shakes there.

The course was absolutely beautiful. The scenery reminded me of Flying Monkey and the course itself reminded me of Burning River. A zillion little ups and downs and lots of small turns but every once in awhile you had a long straight section where you could actually pick up some speed. This is NOT a PR course, for sure.

When I got to the start/finish line after 1 loop I went to my drop bag that was prepared as if I was running a Hundo complete with chia seeds and individual jello/fruit cups. For whatever reason, I was in the mood for cookies and sure enough, that was the only solid food I would eat all race. I never eat cookies at ultras. They seemed to sit well in my stomach this time, so I was happy.

15-20 mph winds, mid 30’s for temperature and light snow on the second loop made for a not-too-pleasant race conditions which is why many people decided to drop after only one loop. There were 34 starters and 25 of those stopped after one time around the horn. The nine of us who finished both loops was composed of 4 of the 5 crew that I came with from Michigan. Andrew has been having knee issues and never planned on doing both loops anyways. I would find him sleeping in the ‘team’ van when I finished my second loop. The second loop was a little tougher as the weather got worse, not better. The temperature was actually dropping and the light snow falling was, while beautiful, depressing from a runners standpoint. I felt 5 degrees colder just seeing that white stuff fly around me.

While I ran this as a race, it was also a test of sorts. I like my training runs to have some element of race-specific training and while running the actual IT100 race course for familiarization was my primary goal, I also came into this race kinda tired and beat up. I had run a total of 100 miles in the 6 days leading up to this event, including a sub 40 min -barefoot- 10K the day before. That race had my feet beaten up pretty good and left my ankle sore.

I have had a sore ankle for a few weeks now and refuse to drop training mileage to allow it to heal and when I started this race, it was sore from step #1. I taped it pretty good and put some tape over the sore parts of my feet to prevent things getting worse, and sure enough, my ankle never got worse even after 30+ miles of trail running. I call that a small victory. 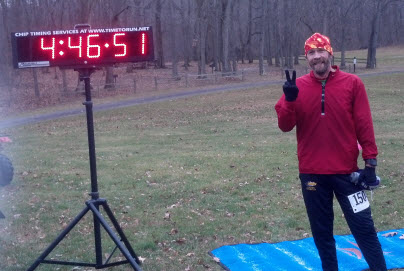 Being only about 3 miles from the finish, I finally turned on some techno and picked up my pace as I knew I had plenty of energy left. I rolled into the finish line a hair until 4:45, which I thought was pretty good considering the toughness of the course. After some tortilla chips and a cold beer and conversation with another runner and the timing guy, I had to get out of the wind as my body was starting to get REALLY cold.

Instead of heading home with the rest of the crew, my lovely wife met me at the finish line and we made it a nice romantic weekend together staying at a local bed & breakfast for the remainder of the weekend. It was a great ending to a good running weekend.
I did not follow my normal food routine for ultras, I came in beaten down after a solid week of running, had a tough race the day before, but I still managed two loops in under 5 hours. While I will not make any predictions or cocky statements about the 100 on this course next year, I will say I hope to do well here. Too bad I have to wait until April.
Posted by Doc Ott at 5:44 AM