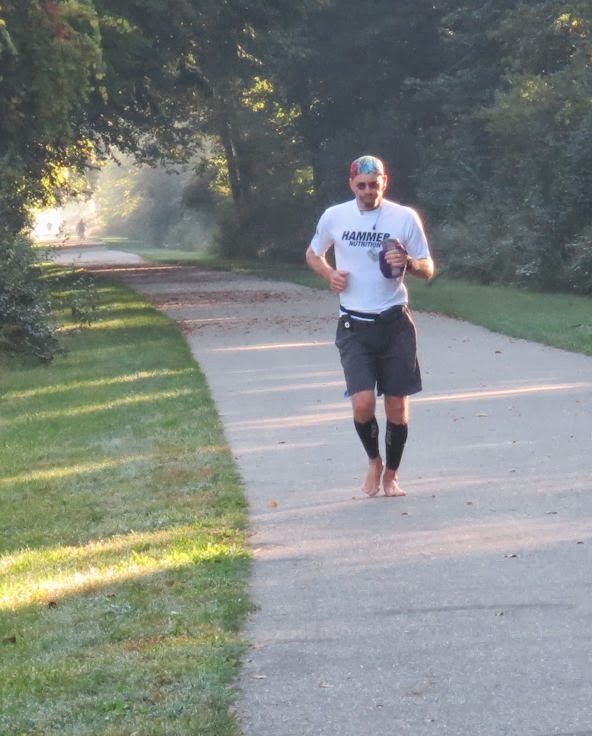 Fat Ass races are low-key events that have no entry fee, no timing chips, no race shirts, nor fancy finishers medals. With marathon entry fees going up, especially at bigger races, there has been a boom of these types of races around the country. These smaller, more personal races are more for the purity of the run. They can be just as fun and memorable as any big time race.

As I near my 100th career marathon(+) I decided I want to start my own Fat Ass race and bring people from around the southern Michigan area to a beautiful part of Jackson, the Falling Waters trail. I had figured out that there was a simple (read: almost impossible to get lost) 13.1 mile out and back section of the trail. Add that it was late September so the temperature was perfect and the trees had started to turn color and you got yourself a perfect set of race conditions.

My day began at 5:30 am with Misty and I going to setup the aid stations for the race. Since it was free, I went cheap on the supplies. At the 3.5/8.5 mile point I put a small table with a gallon of gatorade and a gallon of water with some cups. A similar station was placed at the the 6.55 mile turn around. We then headed to the start finish line to setup a table for people’s contributions to the event. I had asked for people to bring what they could for post race food. We ended up with a good variety including cookies, pretzels and apple cider.

For an 8am start, the first people showed up around 7:25. I hand made 2”x3” ‘race bibs’ out of some tarp I had lying around. I am trying to make this race a little different and fun. The runners seemed to enjoy it. A little after 8am, I explained the route and how simple it was and we took off. 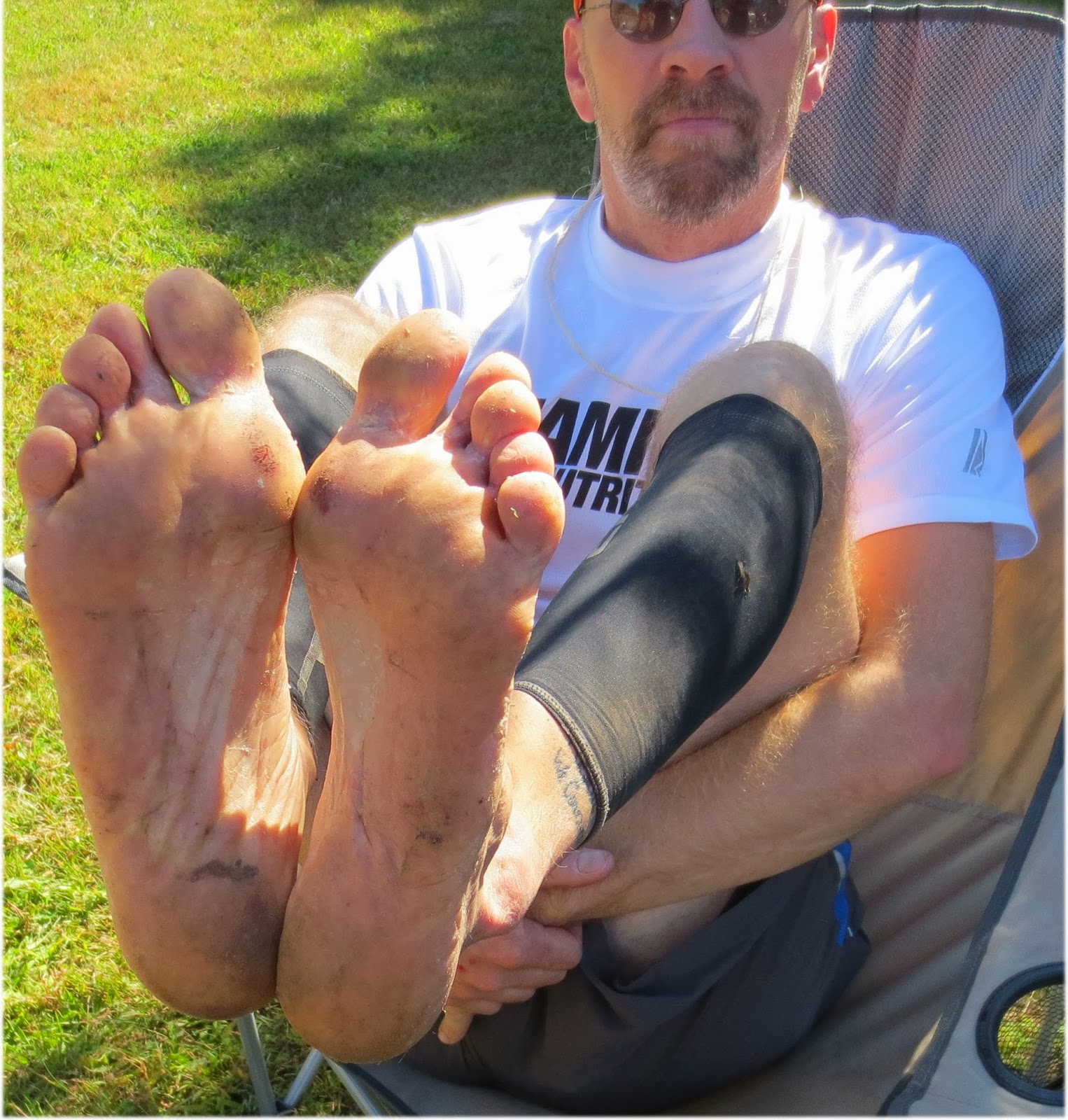 As an added incentive to make the race more interesting for me personally, I ran it barefoot. I have been doing barefoot/minimalist running for a little over a year now and never run more than 14 miles barefoot before, but I knew that this would be a great first marathon sans shoes. The course is on paved trail the entire way, but this asphalt was is good condition so it was not that bad. Every once in awhile, I would wander off the trail and run along the grass next to the trail to give my feet a little break from the hard asphalt. The problem was that, while it was soft, the grass was high and it was hard to see sticks and rocks so I was running very cautiously. In the end, I ran a total of 3-4 miles on the grass. I was pleasantly surprised that I had only 2 quarter sized ‘wounds’ on the balls of my feet, that was it. Of course it slowed me down, but I was quite happy with a 3:31 finish time. 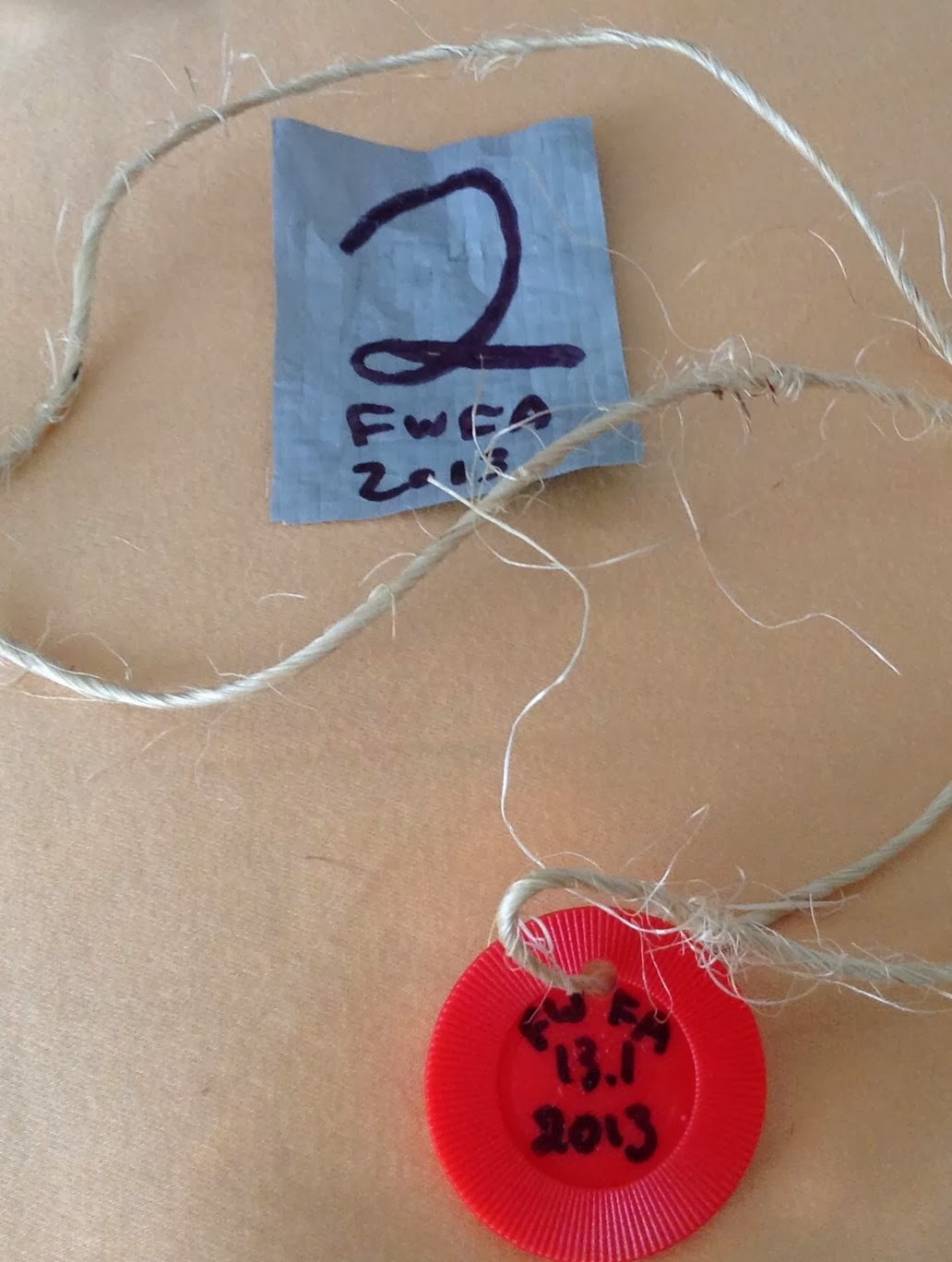 In order to get a few more attendees, I had both a half and full marathon distance. Misty was kind enough to hang at the start/finish and make sure that people got their finishers medal for the half marathon and hold down the finish line until I came in later. She is such a sweetie.

With the idea of trying to make this free race ‘unique’ I decided I wanted to make homemade finishers medals that were still fun. The design I settled on was a poker chips with hole drilled in it, the race information put on it by hand with a permanent marker and a twine lanyard. Memorable and cheap, all at the same time :)

The last finisher came in only 35 minutes after me, so I was able to get home pretty quick after that. It helps that the starting line is less than 2 miles from my house. The total cost to me to put on this race was less than $15, which is just fine. There were fewer people than I had hoped, but those who came were very happy with the event. I hope to do it again in the spring time.
Posted by Doc Ott at 5:30 PM