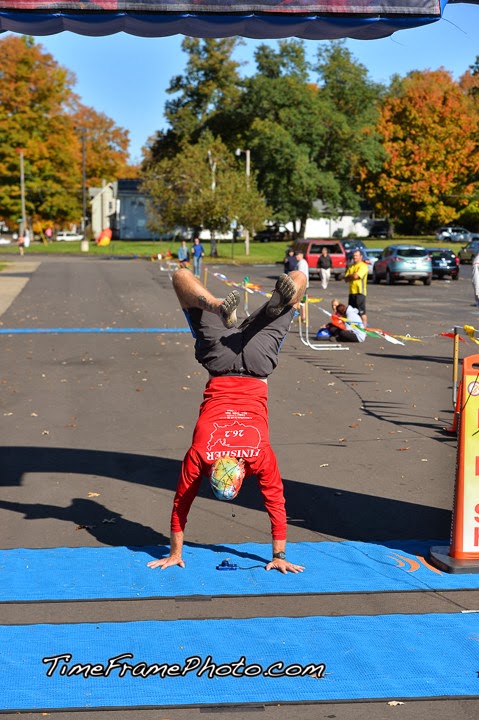 This was my third time running my only 'real' (not counting my FA races) local marathon, with the starting line about 10 mile from my house and portions of the course along some of my most favorite running routes. I try to no run the same race in consecutive years as I try to keep memories of individual races separate in my head. This was the 5th running of the wildlife race, but I had run it the inaugural year and the 3rd year.

So it was a beautiful course, and the race operation is getting better, now in its 5th year. The first year, there were only 28 finishers, but now there are over 100. While there are other bigger races going on right around this time (Detroit, Grand Rapids) this race is small and full of love. It will only get bigger and better.

After my 'restart' a few months ago, I have been trying to come up with new/different things to get me motivated to run marathons, like running barefoot for example. Recently came up with a  new idea where I start out slow, find someone to chat with, and when the conversation goes stale or reaches natural end point, speed up and meet someone new and start over again. Repeat until you find a person you want to finish with or until you reach a point where catching the next person is out of the question. My local race seemed like a great place to test out the new method. As predicted I learned a lot.

I got to the race about 45 min before the start and along with standard pre-race things (bib, timing chip, emptying my bowels, etc.) but I also got to chat with many friends of mine who were also running either the full or half marathon. Since it was my local race I knew quite a few of them. All good folks.

I had been sick most of the week before, so I was trying to rest and did little running. I wanted to start out 'slow' so I planted myself about halfway back hoping that would be about the 4 hour group of people. After about 1.5 mile I realized I had already matched up with people more along the times of 3:40. There were plenty of people in that group, so that was ok. 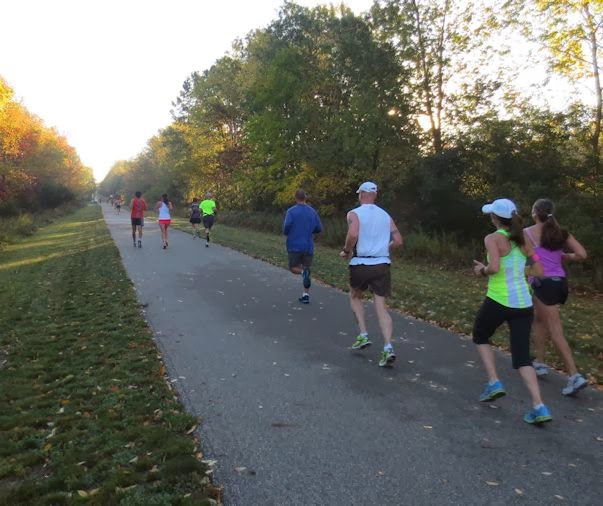 In brief, here are a few stories I got to hear in the first ~11 miles.

- At about mile 5, the eventual 3rd and 4th place female finishers in the half marathon caught me and the group I was with (The half marathon started after the Marathon, so these ladies were cruising at about 6:45) so I decided to fly with them for a half a mile. While focused and clipping along, we still managed a short conversation about half marathons and how cool it was that 5 of the first 6 half marathoners were women.

- A brother/sister group, his 9th, her 1st marathon. They both live outside Detroit and had never been to Jackson before, and were surprised. There found we have some cool stuff here.

- A 30ish year old runner on his 14th marathon, who was interested in my state quest and asked me lots of questions (cost, time, motivation) about it. He has been 'considering' that idea for a while. I gave him plenty of pros and cons.

- Three separate teachers over different parts of the day. A college professor, a 3rd grade teacher, and a gifted/talented teacher.

- At least 5 people who I tried to strike up a conversation with who ignored me or couldn't hear me because of their earbuds. I brought my iPod but only listened to it when I was doing my 'sprints' to catch the next group of people.

At ~mile 10 I met up with a young woman who was running her first race. She wanted to run under 3:30 and I am not 100% sure she did. I ran with her for a while, trying to keep her nearest competitor (at that point about 1/2 mile ahead) close. At this point, I was on a 3:25 pace, and I thought I could catch a few more people, so I said my goodbye wishing her luck, and decided to try to catch a few more people. 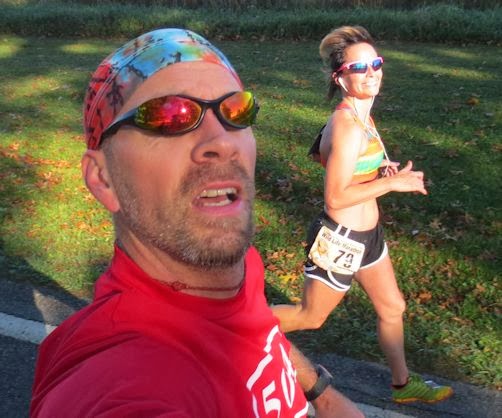 I eventually caught the next runner at about mile 12 who would eventually be the first masters finisher. It was first marathon and she is a cross country/track coach so she had a huge support group. We joined up with another gentlemen on the course and the three of us stayed steady for quite a while. Her longest run before this day had been 20 miles so at mile 15 I did my best to prepare her for what was going to happen to her at mile 20. I was blunt, but tried not to scare her. She started to fade at about mile 21, but I tried hard to motivate her. doing my standard late race motivation.

It was a great race, and it gave me a huge dose of I-Love-Running motivation. As someone who is trying to get back to the love of the sport, this helped a lot.