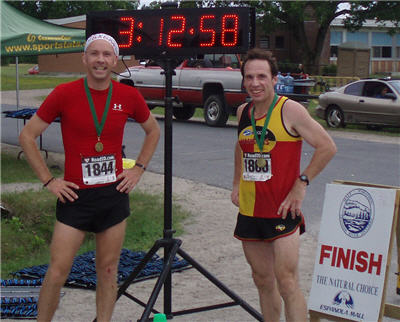 So I guess this counts as my first ‘international’ race even though I was < 2 hours from the U.S. border. I am well traveled, yes, but only inside the United States. I always feel uncomfortable when I leave the country, even if it is to Canada, and I am not sure why. Unfamiliar laws and customs always makes me feel a little uneasy. Thank goodness everyone spoke English.

Massey, ON is a little stop on a ‘major’ east-west highway in Ontario. The town is small, with only one stop light, one gas station, and only one real restaurant.
When I arrived on Saturday afternoon I went to race check in at the local ‘arena’. The tables were set up on what was usually the ice rink. Since hockey is out of season, it was a big concrete slab, but it still felt weird. After that I decided to take in the local area and went over to the a local provincial (think ‘state’) park, known simply as ‘chutes’, as named because it is a river that was used for logging for many years and chutes had to be built around a few of the natural falls nearby. You could tell that this was the most famous attraction for kilometers (Hey, I was in Canada) 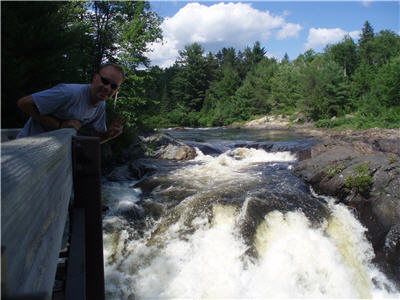 I stopped for an early dinner at THE restaurant and then headed back to the hotel to relax. I played an online game of Settlers of Catan with Stef and then tried to get some sleep. Normally I sleep horrible the night before a marathon, just from nerves. Well, this being marathon #18, you would think I would have gotten over that. Instead of falling asleep watching some bad movie on television, I pulled up the BBC world service on my computer (Did I mention the hotel was really really dumpy, but they had high speed internet?) and listened to that to fall asleep. That is what I often fall asleep to at home, and I think that made a difference. I was asleep by 9pm, and woke up 5 minutes before my alarm at 3:00 am, feeling well rested.

Being so north, sunrise came at 5:50 so the 6 am race start was not too weird. The sky was overcast all day long and it sprinkled very lightly just few times during the morning. With temperatures in the high 50’s all day, I would have to rate the race conditions as nearly perfect, actually. There were three races going on simultaneously, a 10K, a half and my full. For the second time in a row, the full marathon course was just two trips around the half course. Those are always a little depressing because you actually run right by the finish line after about an hour and a half. As with previous times I serious considered (for only a few seconds) just stopping after the half and bailing on the whole thing. I took a few more strides and the feeling went away. I was feeling strong and in my ‘groove’. My first half split was 1:28:11, and my second half was 1:27:39. That is what I call even pace! My first goal was to run easy, not pushing myself, and hoping just to break 3 hours. For the record, I have run my last 5 marathons in less than 2:57. That will all change next week when I run a tough trail marathon on Grand Island.

I think everyone in town (almost) came out to help with the race. The numerous aid stations were all well staffed with very friendly people. The stations were so frequent I actually had to NOT drink at some of them as my stomach was getting a little upset. For regular readers of this blog, you know I have been having stomach issues after long races as of late. I thought it was to eating solid food soon after a race, but now I am thinking that might only be part of it. During this race after drinking quite a bit of Gatorade I was starting to get that familiar ‘gut-rot’ feeling. I think that it might be coming more from the excess of sugar at the end of my races (drinking lots of Gatorade which is what I tend to do). So to test this NEW theory, after the race this time I drank nothing but water, and then a nice cup of tea. Then, only one hour after I finished I had some very delicious pancakes (with syrup) and my stomach was perfectly fine. We will try this new system for a bit and see what it gets us. This, again, is one of those advantages to running lots of marathons, I don’t have to wait 6 months before I try a new tack.

4 weeks ago I ran the Charlevoix marathon and talked a few times during and after the race with the guy who was third (one place in front of me) at that race. A really nice guy, actually. Well, 6 minutes into this race he came up along side of me and we recognized each other and talked for about 2 miles of the race and then I let him go. He ended up finishing second, again one place ahead of me. That is him in my finish line picture. I asked him and he is NOT running Grand Island next week.

This being week 4 of my 5 week odyssey I was hoping to be in not too bad of shape afterwards, and I was happy when my legs were not that sore, even a day later. I am starting to like this marathon-a-month-not-really-training thing.
Posted by Doc Ott at 11:17 AM