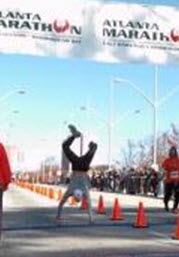 This long weekend began at 3:30 Wed morning, having to get up that early to catch a 5:45 am flight out of Detroit Metro. I had a little less than 2 hours in Atlanta as a layover and my original plan was to fly to Pensacola, drive up to Atlanta, drive to Gulfport, MS then back to Pensacola. With my down-trip layover in Atlanta and having to sleep Wednesday night IN Atlanta, why not just hop off here, get a car STARTING in Atlanta and ending in Pensacola. The answer is cost. Turns out a ‘one way’ rental from Atlanta to Pensacola was going to be $500 as opposed to my Pensacola roundtrip rental cost of $200. Saving 6 hours of highway driving was not worth $300, so I got on my Atlanta to Pensacola flight knowing I would be back here in Atlanta in less than 9 hours.

Once in made it back to Atlanta (1 hour flight, 5.5 hours driving) I went straight to the Expo hosting hotel. I did not want to pay $10 for parking so I found a 20 min loading/unloading spot next to a nearby hotel. In 15 minutes, I was back. I knew that the expo would be quick and I was correct. I walked into the checkin room and saw 6 tables setup for people registered for the half marathon, and over in the corner was the single table for the full marathoners. It being Thanksgiving and a relatively quick time cutoff for the full (5:30) made for a small field in the marathon, ~800 runners.

At the expo was a fellow marathoner who I have become friends with, Dane Rauschenberg. I first met him August 2008 in Green River, Wyoming running the Run with the Horses Marathon. I finished second, him third. Turns out he is an author and was at the expo hawking his book, See Dane Run. I chatted with him for a bit before I headed back to my car. No ticket, of course.

I changed my Atlanta hotel just days before the trip, using hotwire.com staying at the downtown Hilton instead of an Econolodge 20 min away. Same price, actually :). With it being a business hotel and it being Thanksgiving weekend, the place was almost empty so I got a business class upgrade and got a room on the top (28th) floor. Nice view and it entitled me to the business lounge which included light fair food in evenings, so my dinner was small chicken breasts, spring rolls and some cold veggies. Good enough for me (free!)
Since I had been up very early and had a long day, I was in bed watching The Matrix by 8pm and asleep soon after. Up at 5:45, with my PB sandwich and coffee (forgot my tea) and my race day started as it normally does. The race start and finish was at Turner Field where the Atlanta Braves play so there was lots of parking, so much so that I parked about 50m from the starting line and stayed in my warm car until 5 min before the start. 200 M into the race we passed under the Olympic rings and where headed off to downtown Atlanta. It was cold, slightly windy and hills. Not my favorite course for sure. The hills were not that bad, there were just so damn many of them. I was not running that fast, but I could tell it was effecting other people as I passed about 15 people in the last 5 or so miles.

The first 5 miles or so I ran with a few guys, including Dane conversing about the course and marathoning in general. I found out that 90+% of the course we ran was the 1996 Olympic marathon route. I felt sorry for those Olympic marathoners as the course was kind of boring, running the whole time along city streets with unexciting views. Maybe I am just spoiled, having run on some gorgeous courses this year. After about mile 5 we started breaking up and so I was on my own again, like usual with my thoughts. The course was through downtown Atlanta heading north, then loop back as a sort of out and back. The worst thing was the hills, gentle, but frequent. Only a few long ones, all seemingly in the back half of the course. Up and down up and down blah blah blah. The course was rather cold, being in the low 40’s at race start with a light wind. I kept my gloves on until about mile 18 and was still chilled at the race end even though the temp got up into the low 50’s by then. 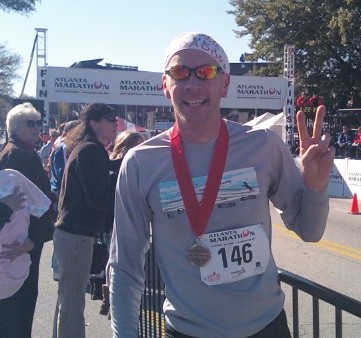 30th place overall is nice. 4th in age with 105 in my age group was interesting. Yes, that means a full 12% of the field was men between the ages of 35 and 39. Where was everyone else? Resting to eat?

At the end, there was standard end of race food, I stayed long enough to take a few pictures then headed back to the hotel for ice bath on my legs (brrr) then a shower. I then headed right back down to Turner field to start my shift volunteering at the HOSEA feeding of the Homeless. I needed someplace to eat Thanksgiving dinner and decided to volunteer my time to a good cause as well. This year, this annual event fed 30,000+ people, quite impressive. As a volunteer, I was tasked with helping clean up the main cooking area, processing leftover food to be sent to area shelters. A family tradition actually, being there until the end. Long story there, ask me sometime if you want the history lesson. I did get fed there with cold VERY dry turkey, but it was still good, considering the intent. The whole thing really made me miss my family, SJ and Misty especially.

After we were all done and closed up, I headed back to my hotel, ate some more free food (buffalo chicken wings and salad. Lots of both) and was asleep my 8pm again, because I was tired, and I had to get ready for my next marathon, coming up in less than 36 hours
Posted by Doc Ott at 10:25 AM