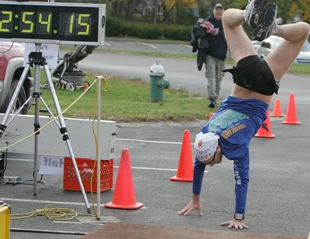 A while ago, I became a member of the 50 Sub 4 marathon club. An organization for people like me, who want to run all 50 states, but not just finish them, finish them fast. As an added incentive, you get so many points based on how fast you run each race. So for example, you get 9 points if you run between 2:45 and 3:00 but only 5 points if you run between 3:45 and 4:00. Your points give an average and a ‘title’ based on your average. I already had a sub 4 Ohio marathon, but it was a 50K (so 5 ish miles more than 26.2) and on wet cold trails, so I only got 5 points for it. So I ran this race because A) it was a close, only a 2.5 hour drive away and B) I wanted to up my Ohio point total for the club.

I am the assistant coach of the JCC cross country team and we had our regional meet the day before this race so I left the house with Mistique at 4pm Saturday, just 16 hours before race start. After a nice drive down, we checked in to the hotel about 6:30. It being the official race hotel there were copies of directions to the race, a late checkout time (2 pm!) and a cheap rate. Gotta love those crappy-economy-deals… Then we were off to dinner. I think I set a record for distance as the nearest Applebee’s was on the other side of the mall parking lot from the hotel. You’ll never guess what I had for dinner…

With daylight saving time ending race morning, race start was effectively 9am, which meant I did not have to get up ‘early’ on race morning. That’s a good thing as I slept awful the night before, even worse than usual the night before a marathon. Race morning went just as well as always, me being comforted in the familiarity of my procedure. It helps to calm the nerves having such a strict schedule. We arrived at the start/finish line (a local elementary school) about 70 min before race start. Mistique was doing the 5K walk while I ran the marathon, so we grabbed our race bibs and timing chips and hung out inside keeping warm before the start.
In looking at previous race results, I know this would be a fast field, (7 sub 3 times with only 160 runners is amazing) so I had no illusions of high place finish. I wanted a 3:15 (8 points for the club is 3-3:15) but would be even more happy if I could break 3 hours, but I was not counting on it. Ignoring 3 week earliers race, I have not broken 3 hours in over a year. I decided to just go out and see how I felt. The conditions were pretty damn good, with little wind and a 40 degree temperature.

The race course was almost identical to my last marathon, 3 weeks ago in that it was along a converted railroad line now paved with woods/lakes/farms on both sides the whole way. Unlike the last race it was only _1_ out and back. My first mile was a nice 6:36. Faster than I wanted to go out, but I thought I was in a comfortable rhythm, so I stuck to it. Mile after mile and my pace never slowed. In fact the difference between my first half and my second half was 33 seconds, a sure sign of even pace racing. Booo yeeaaahhh….

I never hit the wall and I felt great all day. In fact, afterwards my legs were not even sore, no lie. You see, recently I have upped my mileage, even going over 100 miles in a week. I never follow any marathon ‘training schedule’ because I hate being tied to one. I just go out and do my run every day, sometime fast, sometimes slow, but lots of miles anyways. Today I figured out what that high mileage got me. It means I might be able to run sub 3 hour marathons easily. Which means if I actually focused and RACED a race, I should be able to get a new PR.

I got my finisher’s medal and age division award, some food and Mistique headed back to the hotel quick for a shower before we left for home, arriving roughly 23 hours after we left. She is such a doll, kindly driving my tired body home. I ate a bunch of food and even the next morning, no real soreness. I was planning on doing another 100+ mile week (starting your week with 26.2 is a good idea when you have such plans) and since I felt so good, I ran 26 more on Monday, culminating in a 19:51 (that’s 6:20/mile) 5K ‘race’ at the local HS cross country course. Life is good.
Posted by Doc Ott at 10:28 AM