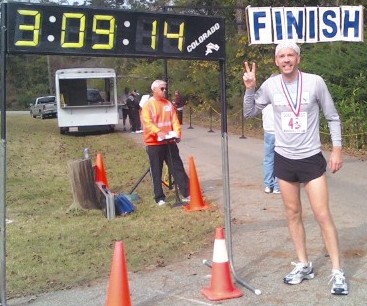 So I woke up in downtown Atlanta at 5:45am, slowly got packed up, took a shower and waited until 6:30, because I wanted my free breakfast. I was soaking this business class upgrade for all it was worth. One of the many things I learned after my last double was that I need to eat lots and lots in between races, to recover from race #1 and prep for race #2. That was my mission in this one day in between races, eat. So I did. I love running.

I finally took off at 7am on my long 7+ hour drive PAST my next stop all the way to New Orleans. The race was near Gulfport, MS but that is just over 1 hour away from the Big Easy. I was in the area and had the time so I decided I might as well take in the French Quarter because that is what you do when you are in the area. I am a ’speed’ tourist, meaning that when I am by myself I can soak up a lot very quickly. I submit my Las Vegas Marathon trip as evidence. I was in the French Quarter for just under 3 hours and thought I had a great and fulfilling time. It was incredibly crowded (which I am not a fan of) but seemed very ’safe’. Street performers, bars, gift shops, a classic ‘tourist trap’. I got my postcards, hit a national park, the Hard Rock Cafe, and the House of Blues (complete with my allowed ‘open intoxicant’. Yes, that is a beer I am holding on the street outside the bar). I even stopped by Harrah’s Casino to get memento chips and decks of high quality cards. 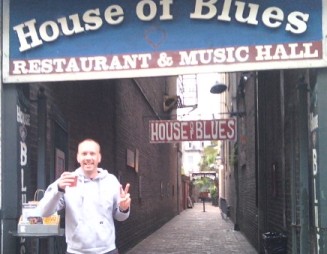 I then headed back to Mississippi for packet picket up which was (no joke) at the Mississippi Welcome center just off the interstate. Ya know, a rest area. There were the tables all setup just outside the rest area building. Umm, there was no ‘expo’ per se

After a 3 min wait to get my number, shirt and some safety pins, I went to my hotel 30 min away (Who is my travel agent anyways? Oh yeah. I am) checked in and walked 100 meters to dinner. On ‘double’ weekends, I don’t eat Applebee’s twice I just can’t do that, so this time I waited until the second marathon. Standard entree for dinner and then back to the hotel and in bed at 8 pm for the 4th night in a row.

A 5:10 wake up and standard PB sandwich for breakfast. No tea, and since this was a Motel 6, no coffee. A 24 hour McD’s just down the road got me a mocha. Note to self: Race morning my body is fine with coffee or a mocha.

The race was held on the Stennis Space Center, so it being a government facility, it took a little while to get through the security gate. It was a little crowded, there being a full, a half and a 5K all with the same starting time. The temp at race start was about 48 degrees with no wind and overcast skies. Absolutely PERFECT race conditions.

The race time clock at mile 1 said 6:10, a pace that I knew was a little fast, ok a lot fast. I had decided to run this race ‘hard’ since I knew I took Atlanta a little easy. I wanted to see what my body could do. I spend all day Friday eating to replenish the tanks and I was ready to go.

My legs were only a little sore so I thought I could hold a good clip. Mile 2 came and I decided I did not want to look at my watch until mile 5. I know my running enough to know that whatever pace I am running after mile 5, I can hold until mile 18 with little trouble. I have trained myself enough that my body ‘gets in gear’ (whatever it is that day) and can hold it between 5 and 18 pretty much every race. Well, mile 5 came and I didn’t want to know. I felt good and strong, and I didn’t want my time getting into my head, so to speak, so I didn’t look. I did touch the lap button at the half marathon mark (without looking, later I found out my half split was 1:24:12) again just trying to stay strong. I never really got tired per se. My body never outwardly rebelling.

Well into the race, still no real leg pain. My shins gave me a little grief and my knees a little pain, leg muscles a little sore, but otherwise I felt pretty damn good. The pains I had were all small and understandable. The half marathon ‘end’ came up and I figured out I was in 2nd place for the marathon. For the record, if I wanted to just run the half, I would have finished second in that race.

I finally looked at my watch at mile 20 for two reasons. I wanted to know if I had a chance at a marathon PR (2:49:59), and because I knew I had a small lead on the third place guy and a 2+ mile lead on the 4th place guy. I knew I would probably get passed (and I did at about mile 23). When I looked at my watch at mile 20, I was running a 6:31/mile pace which is about a 2:51/race pace. I decided to pick it up for a half mile to see if I could drop it to shoot for a PR. I did what I thought was a pick-up and looked down at my watch as saw that my pace was now 6:32/mile. So what that means was that I was doing under 6:30 most of the race and started to fail now that I was more than halfway into my second marathon of the weekend.

Knowing that a PR was now out the question, I just wanted to make darn sure I broke 3 hours. Looking at my watch might have been my death knell as I started looking at constantly and of course, slowed down as a result. I am seriously considering not wearing a watch at all at my next race, and going completely on feel.
I crossed the finish line and still felt pretty darn good. I was way better than after my last double when I felt like I was going to die and Misty thought I had a stroke or something. Post race food included yummy jambalaya and cold Michelob Ultra. I rested for a little while before I headed over to the recreation facility (remember, this is a NASA center) to take a shower before heading back for the awards ceremony since I had the time to burn. This was a small marathon with only ~100 runners, so lots of people got awards. I am way more proud of my 2:55 finish than the 3rd place.

During the awards I saw a guy who was wearing the same t-shirt I was wearing. Yes, it was a race shirt, but the surprise was WHICH race shirt. It was the race I won back in March in Ruston, LA where there were ~30 finishers! Small world us marathoners ‘run’ in…

An easy 2+ hour drive got me back to Pensacola airport with 2 hours to drop off the car, get my boarding pass and eat some more. A late flight and 2 hour layover in Atlanta meant I landed back in Detroit at 12:10 am Sunday morning. I didn’t get home until 1:45 am. Having awoken at between 4-5:30 the previous 4 days, it took some convincing of my body to go to sleep. I woke up at 8am, actually well rested considering how long my trip was.

One day later and my body felt pretty good. Only slight muscle soreness and two toenails that are a little pained. Other than that, I feel great. I am really having fun now. I could do some damage, and be somebody for once doing this stuff…
Posted by Doc Ott at 10:23 AM