This is my fourth (and last) year of coaching the Jackson Community College cross country team. Two years ago, just after the season ended, we took a car full of runners to the NJCAA half marathon championship and decided that in 2008 we should take them (who ever wanted to go) to a marathon. So in Dec 2008, we road tripped to Huntsville, AL for the Rocket City Marathon, with everyone doing well, except me. Soon afterward we decided that for 2009 we needed a different state, so we picked North Carolina, mostly because neither Head Coach Brian Olsen nor I had run in North Carolina yet. This year we took 4 runners, 2 men and 2 women, none of which had ever raced a marathon before.

We left Jackson on Thursday afternoon through light snow and headed south for 8 hours staying the night in Beckley, WV for the night. We stopped on the way at a hole in the wall pizza/bar for dinner. It was a hick bar for sure. The main source of light in the dining area was an Old Milwaukee neon beer sign and one 100 watt bare light bulb over the ‘dance’ floor. It was a hoot. Damn good pizza, and dirt cheap.

Since we only had only a short drive on day 2, we slept in on Friday morning and did not leave the hotel until 10am, arriving in Charlotte a little after 1pm. Went to Subway for lunch, checked into the hotel and headed over to the expo. I almost never buy anything at race expo’s anymore but this time was different. In looking at the forecast day before the race I thought there was no chance it would be warm enough to wear shorts, so I did not bring any. Upon further consideration and the fact I want to run fast and it wasn’t THAT cold, I broke down and bought a pair of shorts on sale at the expo. They also had a pair of my running shoes on sales, $40 off the normal price and I snatched those up too. I should also point out that they were selling race shorts that said ‘Flat courses are for sissies’. Turns out, this really was a tough hilly course.
WARNING: weird segue…

So I have my little facebook page and have three ‘sets’ of friends. My current friends/family, friends from long ago (High School era) and a group of fellow marathon/running freaks. Several months ago I became facebook friends with a young woman in PA who teaches HS chemistry and ran 21 marathons in a year, which was her first year running marathons. People call me a freak, but there is always someone more freaky. Anyways, I found out about a week before this race that she was coming down with a friend of hers to run the half (injury) so we decided to meet up for dinner the night before the race. They met me and the whole crew at Applebees (of course) and appropriate abuse of me was partaken. It was actually very cool, I must say. The two women CC runners painted their fingernails all different (and VERY bright) colors with fingernail polish. They convinced me that I should as well. 14 hours before a big race and was willing to do anything, so I let them. I am a little embarrassed about it now, but oh well, who cares. I gotta be me… I was in bed by 8:30, waking up at 5:15, same ole’ same ole’. Race start was a brisk 28 degrees, so those shorts were a little cold. In fact, I lost feeling in my toes on and off for about the first 6 miles. There was little wind, so the temp was not horrible.
Mile 1 in 6 falt, mile 2 in 12:15. Yikes, that was fast. I maintained a 6:20 pace (which was hard with those damn rolling hills) until about mile 6, then my left calf started to cramp something fierce, an ailment that never went away. By mile 11, my left hamstring cramped followed close behind by my right calf and right hamstring. Tighter and tighter they clenched. Slower and slower I went. I had dreams a of PR (sub 2:50) but the hills and my cramps were not cooperating. I hit the half at 1:24:20ish and I knew by then I could not hold that pace. Sub 3 became my new goal. I still had dreams of beating Brian, though.

You see, Brian is 48 years old and had beaten me every head-to-head race we have ever had at any distance, 4 of which have been marathons. It seems every time I race against him something goes wrong. Knees, sick, bad training, cramps, whatever. I bow to his excellence and my ineptitude. He finished 9th overall (out of 1409) as he passed me at mile 19. He looked strong and finished just under 2:55, which for him is a very good time, especially considering the course. 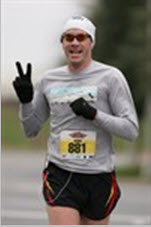 Breaking 3 hours was tough, as I want to start taking walk break after about mile 18, but never did. I finished 22nd, but at least 10 people passed me those last 3 miles or so. I tried so hard just to keep moving, concentrating on a sub 3 time. With only 90 seconds to spare, I was cutting it a little close.

Brian ran a 2:54, the two male cross country runners ran 3:18 and 3:24 and the two women both ran 4:09. A friend/former relative of Brian’s who also came along ran a 3:44 in his first ever marathon. That meant of the 7 of us running, 5 were marathon virgins. We were the full range of soreness afterwards, some just fine, some looking like they were 90 years old with bad joints and everything in between.

This race ends my 2009 racing season, which was quite strong. I completed 7 marathons in the last 13 weeks, with 4 of them under 3:00. That might explain why I am so darn tired after this one. I do not race another marathon until Feb and that is a ‘vacation’ marathon, being in Sedona, AZ. I might even run with my camera that day and shoot pictures, who knows.

With legs being sore and in a car full of marathoners on the way home, I think I decided that I am going to try a longer distance in 2010, starting with a 24 hour race in VA in April. I can run marathons quickly and with little recovery between them, so maybe my body is built to compete at even longer distances. Time to try out that theory…
Posted by Doc Ott at 10:19 AM