So I have done a few ‘doubles’ in my running career (two marathons in consecutive days) and had mixed results. It seems I usually have shin problems going into all of them, spare one. I have never done a back to back double (4 marathons in 8 days) before this stint, and I vow to never do it again. I would rather run 100 miles in one shot than do it over the course of 8 days in 4 different races, I’m just sayin’…

This trip started (again) at 4am Friday morning to make a 6:40am flight out of Detroit. Unlike last week, I had a longer flight to get some reading done and did not arrive in Salt Lake City until late morning. The weather wasn’t all that great (nice temps, but cloudy) so the mountains didn’t look that great. I know these mountains well, so my brain filled in the gaps, no problem. I had time to burn and on the way towards the hotel so after a lame packet pickup, I stopped by the Hill Air Force Base Aviation Museum. I usually don’t pre-plan touristy things, I just let karma guide me when in a new place. This time I was way lucky. I got to see a bunch of cool planes up close and personal, including an SR-71. A very cool looking plane that has 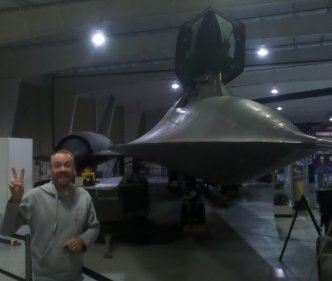 been my favorite as long as I have known. It is wicked fast (world record holder, still) and sexy looking, especially at a range of 3 feet. A wonderful time killer, for sure. I ate dinner at Applebee’s, but knowing I would eat there (well, an Applebee’s in Portland, OR) the next day, I got something other than Fiesta Lime Chicken. Still good and tasty.

Early to bed, early to rise, at 3:30 am (local) for a 6 am start. This race was a point (staring on the south end of Antelope Island) to point (somewhere in Layton, UT) race so there was a bus to the start at 5 am. Not wanting to miss the bus, I got there plenty early. A quick phone call to my lovely (and still half asleep) wife and I was on the bus into the darkness.
I met some pleasant people at the race start, including a few marathon maniacs and at 6:15 (only 15 min late) we started off, heading North with greater Salt Lake City (at the lights) to our right. It was so dark, I could barely see the road for the first 45 minutes. Had it not been overcast allowing for the city lights to be reflected) we would have all needed head lamps for sure. The view for the first 10 miles was great, except we could not see the mountains to our east. In fact, we didn’t see them all damn day they were shrouded in clouds. On the island, there are hills and a few roads, that’s it. Well, besides a bunch of sage brush and 5 buffalo I saw. The smell reminded me of my home for 3 years, Rock Springs, WY. A nice sweet ‘middle of BFE’ kind of smell. 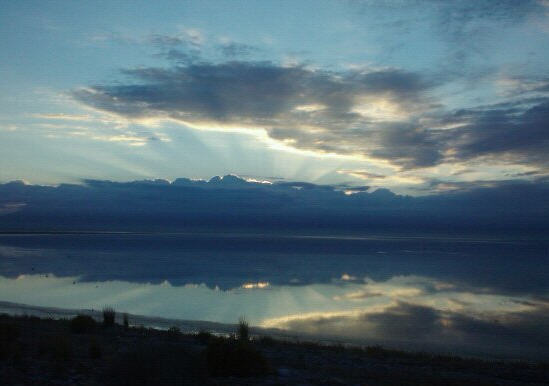 At mile 10, we left the island and started the 7 mile STRAIGHT shot of the causeway back to mainland Layton. My shins were starting to hurt, so I ran most of the time on the gravel shoulder of the road. Nice even pace all day long, ~7:40/mile. I was tired and I knew I had another marathon tomorrow, so I took it easy. I was never in severe pain, and my shin after this race would not feel much worse than after my first race the previous weekend. The temperature at race start was probably 45, and at race end, maybe 65. Again (knock on wood) a beautiful race day for me and my fellow runners.

This was the inaugural Layton marathon, and as many of you know from reading this blog, running the ‘first annual’ anything is usually a bad idea. But yet, I did it again, knowingly, because it fit my racing schedule. That 15 min late start was the only hitch in the entire day. The course was very well marked, plenty of water at all aid stations, happy volunteers, all good. The finish was nice, well run, cool finishers medal, but the post race food was a little lacking. Oranges, bananas and peanut butter sandwiches. Seriously, that was it. Oh well, room to improve I guess. :)

Knowing I got burned last week for not eating enough (I just wasn’t hungry!) I bought a 6-pack of Glucerna strawberry shake. It is a drink make for diabetics and each bottle has 200 calories. After the race I drank all 6 and they all tasted delish. Unfortunately, I had never done that before. I will just tell you that about 4 hours later I stopped at a pharmacy to buy a box of Imodium-AD. ‘nuf said.

My flight wasn’t until 4:30pm local, so I had some time to burn. Got a quick shower and some ice for my leg and I went to a local sports bar to watch some football. As predicted, I had no appetite. It literally took me about 10 min of staring at the menu to finally decide to get a burger, and I only ate about 2/3 of it. I need to figure out a solid food to eat post race, because I need a solid food for when I am doing 100 milers that sits well and my mouth doesn’t reject (like it does consuming most Gu type stuff) . Later that day I did buy a box of saltines and ate many of those with some peanut butter. That got some calories in me and I didn’t balk at that, but I hope it is enough to get me through tomorrow. We shall see…
Posted by Doc Ott at 3:44 PM