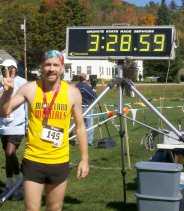 Freaks abound, and I am one of them I admit, but no matter how freaky you think I am, there are those that are far freakier. My good fiend Gary and his girlfriend Morgan are just such freaks. I do ~1 marathon per month, they do 1-2 a weekend. Every weekend. Even when injured. They will both finish 50 states at the end of October, having started just last year. There are many other stories of people just a wacky. I am glad to call them friends and fellow marathoners. This was a weekend of hanging out with the crazies, for sure. Because this was the first marathon of 4 for me in the space of 8 days
It all began with a 4am wakeup on Friday for a 6:10am flight to Manchester. (It was the cheapest, what can I say) I had time to kill (obviously) once I got to New Hampshire so I headed for the ocean. Unfortunately, a nasty coast wide (yes, from Miami all the way to Maine) storm was just finishing its downpour that day so it was rainy and generally depressing at the ocean. I did find a Starbucks and spent some time working on my race schedule for 2011. Its never too early to start, ya know…

Friday night I had dinner with friend of friend of friend (Erin) and her boyfriend Mike. Two wonderful people who were more than happy to lend their place for crashing marathoners. So gracious are they, that they ran out of room, but not to put me out, Erin convinced her mother to let me sleep there. It was pretty cool, I must say.

I woke up at 6 and stopped back at Erin’s house to have some polite conversation and some fresh fruit. We talked about running, school and a cool site called couchsurfing.org. Couch surfing is kindof like hitchhiking, only staying at someone house instead of just riding in their car. Saying it that way makes it look scary. It was really nice to share stories with other crazies.

The weather the previous days had been horrible but (because of my incredible race weather luck) it broke on race day. 45 degree and sunny sunny sunny.

The course didn’t look hilly based on the course elevation profile, but there were zillions of small hills. None of them were too high, just too many of them. The course was (mostly) around beautiful Newfound Lake. It was a nice day, but very windy, in our face most of the day. Luckily though, most of the last 5 miles had the wind at our back.

I have been having shin issues for a few races now. I am working on it, and they are getting stronger, but I knew they would not be 100% for this race. At about mile 17 they started to give me a little grief and were not great at the end. Ice and more stretching reduced the inflammation, but they would not recover by the next race, since it was 18 hours later. 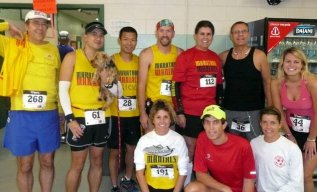 There were lots of marathon maniacs doing the same double I was this weekend (NH and ME) because they are only 2.5 hours apart by car. Because there was an out an back portion of the course, I got to high five about 25 of them. I even got my picture taken by a few of them. Fun people, they are.

Though I did not see him at the start, I saw my friend Chuck Engle during the same out and back (me going out, him back) and he won the race and beat me. He always does. Remember those freaks I was telling you about, Gary and Morgan? Chuck runs just as frequently and a little faster. I chatted with him a bit after the race, and as always, it was great to see him.
I had a pleasant and quick shower and ate some post race food (pizza!) at the sponsoring school and then I started my 2.5 hour drive (all back-roads and very beautiful) to Portland. Where our next chapter takes us
Posted by Doc Ott at 3:50 PM