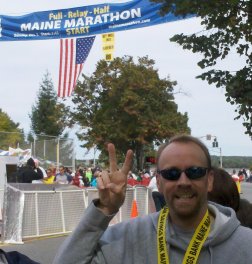 One of the most important things to do in between consecutive day marathons is to eat. You have to replenish what you burned race 1 and then stockpile for race 2. My problem has always been I have no appetite right after a race (or heck, during a race either). That hurt me in my debut 100 mile race and sure enough, it got me here as well.

I woke up with two other people in my hotel room. Morgan, (fellow marathon freak and girlfriend to Gary, whom you have heard of before on this blog) and Adam, a marathon maniac from L.A. who just needed a place to crash. We had a pleasant conversation about marathoning the night before at (you guessed it) Applebee’s. Adam was walking the race (due to recent surgery) so he did the early start (6am as opposed to the main 7:45am start) a
nd so I drove him to the starting line early but the early rise was in my normal ritual, so no fuss.
Morgan and I got ready and headed to the start 45 min before the gun. We hung out with the crowds of marathon manics the day before in NH, but couldn’t find them here in Maine until right before race start. The weather was a carbon copy of the previous day, but a few degrees colder and no wind whatsoever. A little wind would creep up near the end, but the temperature would off set it.

The very first steps (and all others) were painful, the first few miles adding up to be horrible. My quads and calves were fine, but my ankles and shins were in pain and I looked silly, trying to compensate. I just tried to be gentle, but honestly wanted to stop from the very beginning. After a few miles I think I just got numb to the pain and my gait got stable and I seemed to get used to it. My first mile was 7:32 and in the end my per mile average was a little over 7:40, so there was not too much slow down. Sadly, I am getting used to running with that pain. I shall overcome. Damnit.

For the second day in a row, there was a portion of out-and-back togetherness that allowed me to again high five a bunch of marathon maniacs, which again was cool. A built in cheering squad, gotta love it. They were all happy and enjoying themselves, many again taking pictures of other maniacs. Since I did not eat enough I got horribly tired and was running on fumes for the last 8 miles. I actually started taking Gatorade at aid stations (which I almost never do) just to try to survive. Just then I remembered I did not use my new and improved recovery drink, chocolate milk. How could I have been so forgetful??

The course was fine, starting out near a bay (I never did have a good view of the ocean during the race which was a bummer) and then getting to urban ‘backroads’ with lots of color changing trees. Nothing to right home about, just another course, actually. What for sure did stink was that with about 2 miles to go, you can see the finish line area. I hate that, because then those last miles seem to take forever. If and when I design a marathon course, you come around the last corner and you have 100m to go. Done :)

Since I had not eaten enough, after my handstand, I was hungry. Very hungry. I was waiting for Morgan to come in such that I could take her to the airport so I hung around the finish line and ate. A lot. Several glasses of Gatorade, 2 bottles of water, 2 bagels with cream cheese, 2 bottles of chocolate milk and 7 containers of yogurt. Later I would eat a lot more, probably the most I have ever eaten in a 10 hour period in my life. Yeah, I was toast at the end of this one. I am glad I can still say that I learn a little more about my running every race, even after 51 marathons.

A two step flight late Sunday got me home in my bed a little after midnight. I was so completely exhausted because the flights were just short enough that I couldn’t sleep on either one. It took me a few days to catch up on sleep. Now I have to nurse my legs and eat a bunch because my new marathons are next weekend. ugh.
Posted by Doc Ott at 3:47 PM