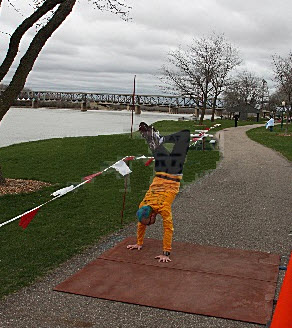 State #48 was more about the road trip than the race itself.
My trusty running friend/pacer/coach Ryan arrived at my house on Thursday afternoon and we left, trying to get some miles behind us before the long driving day on Friday. My other good running friend, Gary, who currently lives in Erie, PA left right after work and drove to meet us at our hotel in Joliet, IL. Gary is used to driving late at night to races (he does it all the time) and was scheduled to arrive somewhere around 3am. When I woke up at 5:30 and saw no sign of him, I texted him asking if he was alive. Turns out, he was so tired, he got to the hotel parking lot and fell asleep right there in his car, without even undoing his seatbelt. Safe driving, eh?

We got his stuff packed up into my car and took off about 6am for the 10 hours left we had to go to make it to South Dakota. Gary slept in the back seat for a few more hours until we stopped for a pizza lunch some where in Iowa. Iowa, Nebraska, and the Dakotas are just plain boring to drive through. Few hills, long expanses of nothing much besides farms. Being completely overcast just made for a blah visual day. Conversations were standard marathon road trip banter, talking about races, past and future.


We arrived in the cow capital of South Dakota, Yankton at about 4pm local. With packet pickup at 5, we checked in to our hotel and went out for dinner. We had Applebees the previous night, so I had ribs. I had never tried that for a pre-race meal before, and it did not disappoint. This being a small town race, the packet pickup was held at the local bike/outdoor shop which was technically a wing of the local Ace Hardware store. Umm.. no expo. 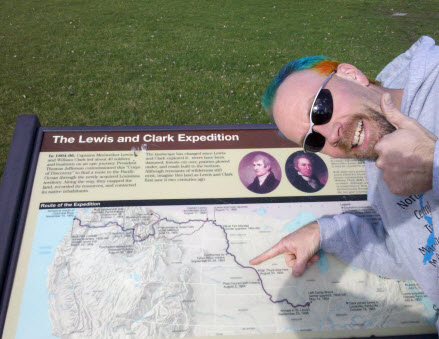 The three of us crashed for the night about 8pm, well Gary and I crashed. Our hotel room was quite near a local bar that had live music playing. Poor Ryan didn’t fall asleep until the band stopped, somewhere about midnight. Did I mention the band wasn’t that good?


The 4th member to our party, Morgan (Gary’s girlfriend and fellow marathoner) had flown into Omaha late the night before and drove up, arriving at our hotel room at about 3am. She was not running this race, and just came to spend time with Gary (she now lives in Phoenix). 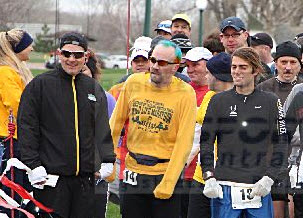 6am and we were up and ready to go. Race conditions were so-so. The temperature was mid to high 40’s, but we had 20-25 mph winds all day long. With the course meandering in all directions, it was sortof a pain. Poor Gary has no fat on his body so he was wearing 5 layers on his torso and was still cold.


8am start and we all set off into the wind. It was absolutely brutal for many of those early miles. The course went through Lewis and Clark Recreation Area, including many miles on the banks of the Missouri river. It was a very peaceful and pretty run. A few hills here and there that were not that bad, and overall good run. The only thing I really disliked was running right next to the water treatment plant at mile 25. That was annoying. While I though the course was ok, Gary and Ryan didn’t much like it at all.


Gary is trying to run marathons in all 50 states under 3:00. He is a little faster than me, but not that much. He has accomplished sub 3 in 40 states, but here in South Dakota, he has failed, now twice. He ran a 3:07 (finishing one place ahead of me) and sadly will have to return again to attempt a sub 3. Ryan, however, had a better day. He had run 2 marathons the week before (the same marathon race course, just twice in one day) He had been sore, but was very happy to run a 3:47 this day considering the wind.


Quick showers and we all took off. Morgan had been planning to go back to Erie with Gary, so we had to go back to Omaha to drop off her rental car before the 4 of us headed east. Ryan and I took turns driving, resting when we could. We ended up dropping Gary and Morgan off in Joliet around 11pm, Ryan and I then getting to my house about 2:30am, and then Ryan took off getting to his house at 4am. It was a loooong day, but we all made it through.


A fun cross country road trips with good friends, which made up for the unexciting marathon. This was also the first race that I tried my new shtick, the dyed hair. I had been toying around with the idea of dying my hair the week before big races (so people would know I was racing) and then shaving my head right after the race. Having never dyed my hair before, I was a little concerned about peoples reaction. Turns out, almost everyone loved it (even my lovely wife, Misty) so I think it will work. I won’t do it for every race, just the important ones like 100 milers, state #50, etc.
Posted by Doc Ott at 2:11 PM