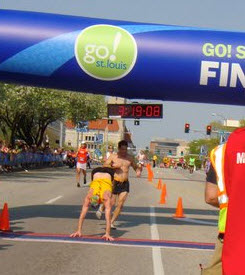 State 47! Yeah! That means I am getting oh-so-close to my 50 states goal, and I tell ya, it can’t come fast enough

This race would prove to be fun, hot, and demoralizing all at the same time.
St. Louis is only an 8 hour drive from home, so I left early Saturday morning getting to the marathon expo in the early afternoon. I met up with a ultra running friend, Rob, who was set to be the 3:50 pace group leader. During the race, he had to fall back due to heat sickness but according to him, his group had already all fallen away before so it was OK. What’s worse, is that his racing chip was not working and so (as of this writing) he does not have an official finish time. Rob and another maniac friend of his, Steve, and I got together Saturday night to swap war stories and have a few cold ones. Turns out, Steve is a fast marathoner, his average race time (he calculates it meticulously) being close to the 3:00 mark. When asked, he said he wanted to run in the 2:50 range to drop his average time a little bit more. For the record, he beat me by only 30 seconds, finishing 25 min slower than his goal. Did I mention it was hot? Everyone crashed this day it seemed. 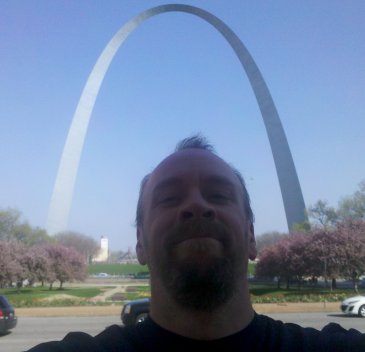 I had some free time Saturday afternoon, so I did the speed-tourist thing, this time hitting the St. Louis Arch. I had been here as a child, but forgot how HUGE the 500+ foot sculpture really was. That was way cool, and I also went to the nearby courthouse (1st courthouse in St. Louis, built in mid 1800’s, awesome architecture) and found out this was THE courtroom that started the court case (Dred Scott, slave suing for his freedom) that led the famous US supreme court decision that can be argued was what began the US civil war. Considered the worst event in United States history, that epic struggle has roots in a simple courtroom. It was cool being in a place of such important history.

And of course, the arch itself was there to commemorate (amongst other things) the starting point of the Lewis and Clark expedition after the Louisiana purchase. For those avid fans of my travels, you remember I visited the official place commemorating the OTHER end the Lewis and Clark adventure in Oregon back in Oct, 2010. Just goes to show you I am really trying to do more than just run marathons when I travel all over.

After a good nights rest on an air mattress at a friend-of-a-friends local apartment, I got to the race start early enough to be in the massive marathon maniacs group picture. We are becoming quite the large national group.

Since my last marathon two weeks ago, my hamstring has been bothering me, In fact, I had not run one single mile since that last race, only doing walks and elliptical training to keep my cardio system up and minimizing impact and strain on my poor hamstring. I even got a deep tissue massage two days before this race, which helped, but it was still sore race morning. My only real goal was to finish under 4 hours, as I really had no idea what my hamstring would do. But, as a starting point, I found the 3:10 pace group and decided to start with them. It was led by a really nice 2:35 marathoner from Grand Rapids, MI named Chris. He did an awesome job keeping us upbeat, with lots of suggestions throughout for the newer racers. At about mile 5, there were still over a dozen of us hanging with him, as we rolled through downtown St. Louis, including running near the Arch and by the Anhueser Busch Brewery. The first few miles were rough on my hamstring, but it loosened up as we went, to a point where I did not feel it much at all, and that was not because it went numb from pain, promise :) I think I was just very smart to keep my form good and smooth and with no real strain, I was fine.

At about mile 15, we hit more residential St. Louis and the long slow hills began. Combined with the raising temperatures (low to mid 80’s) I started to slow, as did everyone else. The 3:10 pace group slowly left me and I tried to keep them in sight as long as possible, but it was no use. As almost always happens, my second half is ~10 min slower than my first half. This was another survival marathon, so I was totally cool with just finishing strong. No matter how much the urge to walk struck, even on those long slogging hills, I never did, not even at water stations. At mile 22 a very nice woman was handing out Starbursts which were absolute heaven. I guess my body was craving sugar it seems.

A short wait for my free Michelob (tasty, of course) and I was on the highway within an hour of crossing the finish line. I arrived back at my house with sore muscles, fresh good and bad memories of another state conquered a mere 38 hours after I left. The light at the end of (this) tunnel gets a little closer and a little brighter. I think I am starting to get excited.
Posted by Doc Ott at 2:14 PM