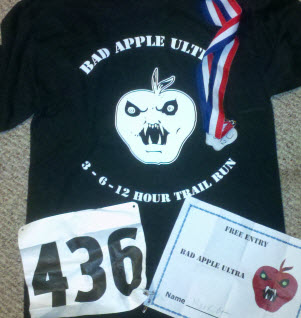 Post 50<4, I am trying to redefine my running career. I am not sure yet if I want to go all the way back to doing 100’s, so I decided to try a race in the middle distance range, well MY definition of middle distance, a 6 hour timed ultra.

Inaugural races are generally to be avoided as the RD’s usually have a good idea of what to do, but forget critical things. Well, lucky for us, these folks knew how to run a good ultra. They dreamed this race up because there were no timed races in the state of Michigan so was born the Bad Apple 3-6-12 Ultra. For those who don’t know, timed ultras are a little different from any normal race. Instead of seeing who can run a pre-defined distance (26.2 miles for example) fastest, you run a specific distance loop (here it was 4 miles, sometimes they are 1 miles, other times its a 400m track. ick.) as many times as possible in a set time. This day I decided to run the 6 hour race though I had thought about the 12, but with all the other racing I had done this fall (7 marathons(+) in 9 weeks) I didn’t want to blow up.

Klackle Orchards in Greenville, MI was the site of the race which is a working apple orchard complete with hayrides, pony rides and other family friendly activities. This is one of those orchards that you bring the family too for a few hours. We actually ran through the orchard which was very beautiful. Good solid footing, enjoyable views, and perfect weather, ~45 degrees at race start, ~60 at end. It was awesome and only one time did me and another runner make a wrong turn on the first loop. No real problem as it added maybe 300m to our run which is nothing when you are running for 6 hours. Halfway through the 4 mile loop was a smaller aid station, with 2-3 people handing out a good selection of ultra food (chips, candy, soda, etc) Marathons hand out water, Gatorade and sometimes gels. When you are running for 6, 12, or more hours you need more calories. I also brought my own ‘new’ ultra food, pickle juice. I collected some from various empty pickle containers in my fridge and the electrolytes are super high and the pickle juice doesn’t taste too bad. After each of the first 6 loops, I took a healthy swig of my pickle juice and I think it helped. As with other ultras, my appetite waned later in the race and nothing tasted good. I have to figure that one out.
Another awesome part about timed ultras is you get to see people often as you pass them (12 hr racers going a little slower) and when you are passed (3 hr racers and relay racers) as well as the nice folks at the aid station and start/finish line. When I would come by the start line, I was getting all sorts of encouragement, even from people who knew me by name (I didn’t know them) which was a little weird, but cool.

My first 3 laps were all consistent, right around 7:35/mile pace. At the very beginning, there were 4 guys in front of me that went out much faster. I just wanted to have a good solid day, so I was content with my conservative pace. I wanted to try to make it all day without ever talking a walk break (a goal which I achieved) but to do that you have to start out slow. Maybe those 100 milers have helped. :) I felt great halfway through, just pounding out the miles, listening to movie audio while running through the woods, enjoying my day. About 3.5 hours in, I asked the official lap counter how many people were ahead of me and by how far because I was curious. She told me I was in the lead. This was a very small race (most ultras are) but I didn’t think all those guys in front of me had been relay members. I had passed one halfway through the first loop, but either those other three guys were relay runners or they took long breaks at the start/finish. Either way, I was in the lead and wanted to stay there. My favorite mantra came into my head, ‘Don’t blow up and you will win’. I love that mantra, and it kept me moving at mile 30, mile 35, mile 40…

As it is a timed race and the loop is large (4 miles is considered a long loop for a timed ultra) there have to be tie breakers and this one is a little confusing those not familiar with such races. Say I arrive the start/finish line at 5:50 after finishing 10 laps. The next guy gets there after HIS 10th lap in 5:55. I was there first, but it is a 6 hour ultra. So, what they do is allow you to finish any lap you start before the 6 hr clock expires. This is called a ‘bonus lap’. So, If I start my bonus lap at 5:50, and #2 starts his bonus lap in 5:55, that’s fine, whoever gets around the horn first wins the overall. So, as I came in for lap 9 (about 4:58 in) I kindly asked the lap counter to pay attention to the #2 guy and where he was because I wanted to know the next time I came around how much of a lead I had on him, because that would make a difference in my decision to do a bonus lap or not. So at 5:35 I rolled by after my 10th lap (40 miles) and she told me I only had about a 15 minute lead. So, if I stopped, which I kind of wanted to do, he could have hit the line under 6, do one more loop and beat me. So I pushed off and started my bonus lap, but backed off a little in my speed (no walking, but running at 8:20+/mil pace) because I knew that as long as I didn’t blow up, I would beat him.

I finish my bonus lap at what my watch said was 6:13 to secure the official win. Turns out, the second place guy didn’t even do a bonus lap, so in the official results, I am the only one with 11 laps completed. Career W #6 in my home state in my first ever 6-hr ultra. That was a way cool feeling. My prize for winning was free entry into next years race (a ~$90 value) which is AWESOME. Way better than any trophy. One more awesome thing about timed races is everyone finishes at the same time, so the post-race party is more ‘full’ as all the finishers are right there, fresh from the event, eating good food and chatting about the race, other ultras, swapping war stories, etc. Hanging with my fellow ultra freaks is always a fun time. I fit into this beyond-marathon culture, even though sometimes I still think I don’t deserve to call myself an ultramarathoner. I know that it sounds weird, but I just don’t think I am worthy sometimes. Oh well. Great race, fun memories.
Posted by Doc Ott at 1:26 PM