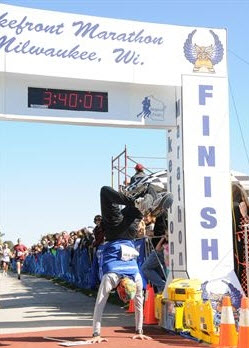 My second official pacer experience was like any other race experience, a learning one, but fun and exciting too.
Every once in a while, my lovel wife Misty can make the road trip with me to race, and this was just such a race. We left Michigan on Friday after she was out of work, and passed off the three kids to the respective ‘other’ parent. We then pushed on to my parents house in Cross Plains, WI, arriving at about midnight. Misty went straight to bed and I stayed up and talked with my Mom for a while. It had been a long time since I had seen here, so it was very nice to spend some quality time with her.

Saturday morning my sister and her family showed up for breakfast and more lively and enjoyable conversation ensued. Because I had to work the expo, we took off mid morning arriving in downtown just in time for my shift. The expo was pretty small, but had a good time chit-chatting with two other pacers. Standard banter, favorite races, fun racing stories, long term goals, etc. After my expo shift, Mist and I went to the Milwaukee Art Museum, which was totally awesome. A wonderful and diverse art collection inside a beautiful building along Lake Michigan. We stayed until close, and then headed to a downtown Irish pub for a great dinner. It was like we had been on a 24 hour date, it was so awesome.

I finally went to bed after watching my mighty Wisconsin Badgers beat up Nebraska and slept quite well. 4:45 wakeup, apple, banana, and 2 cups of coffee for breakfast and I was on the bus riding from host hotel to start line, ~26.2 miles away in Grafton, WI. The start line was within 10 miles of the house my father grew up in, which was kindof cool. The other 14 pacers and I hung out in the High School for a while waiting for race start since it was about 45 degrees outside. 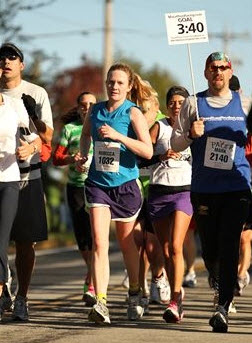 I had checked the forecast just a day before and it was supposed to be high 30s at race start and not get much about 50 by the end so I wore running pants and a long sleeve running shirt under my official marathonpacing.com singlet. It felt fine before I started running…

About 25 minutes before the start me and my fellow pacers were up at the start holding our signs and people started congregating around their desired pacers. 5 minutes before the gun, I gave them my standard instructions. My background (give them confidence I will hit 3:40), that I will run through aid stations, that i will maintain dead even pace all day long. I also promised them a funny joke if they made it to mile 18 with me.

In the very beginning, I probably had about 70 people with me, with about 50 of those still there at mile 8. It took me a little longer to get settled in my pace. I was never more than 30 seconds off of where I should be at any specific mile marker, but I spend many miles in the front half 15-20 seconds behind schedule. I had to SLOWLY get those seconds back and managed to by the half marathon marker. My scheduled arrival time at that mat was 1:50 flat, and my chip time was 1:50:02. Boo-Ya.

The course was actually quite beautiful, with gentle rolling hills along back country roads, occasionally going by gorgeous Lake Michigan vistas. I was so focused on keeping my pace even, I had to try to enjoy the run every once in a while. The temperature started rising and I realized that I might have a problem. I was over-dressed, but more importantly, there wasn’t much I could so about it. It would have taken me several minutes to stop and do a costume change, but I was supposed to be running 8:24 mile-in mile-out, so I had to tough out the suns increasing heat in my running pants and long sleeve shirt. It made the last part of the race a little tougher than it should have been, but I learned that I have to spend a little more time planning racing attire when I am pacer. 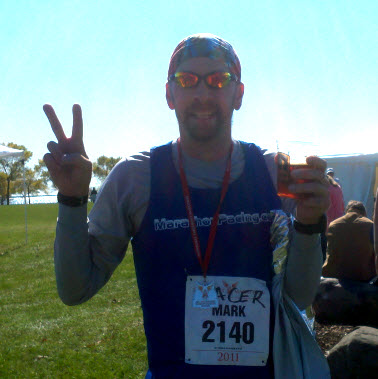 At mile 18, I told my one funny joke (“A guy walks into Baskin Robbins…”) to about 20 people who managed to survive with me that long. They laughed. The group then began to break up. Some were feeling good and took off in front of me, some started to fade behind. By mile 23 I was pretty much alone, just being the solid even pacer dude. As I crossed the finish line in 3:39:51, there were a couple of my starters within 20 m of me who all thanked me after they crossed the line. Their thanks meant a lot to me. I really enjoy pacing, helping other achieve their marathon goals.

Since it is Milwaukee, the was of course free (delicious) beer at the end as well as a good spread of post race food. non-crappy finishers medal and yet again, a great marathon memory, especially because I got to spend it with my lovely wife. She really is fun to travel with.
Posted by Doc Ott at 1:40 PM