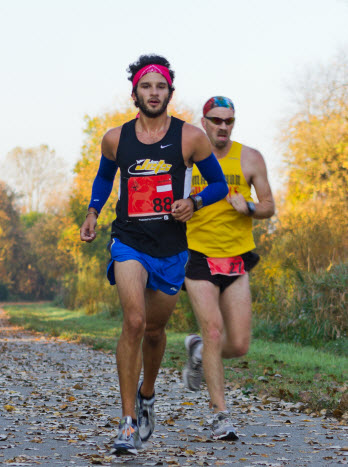 This was my warmup race to my 50th state tun next weekend in Hartford, CT. It was really fun for a few reasons, including being (essentially) in my backyard, almost perfect race conditions, and getting my long time running partner Joel through his first marathon.

My friend Rob and his running buddy Scott needed a cheap MI race, and they just happen to chose this one. When I found out he was running it, I immediately offered to let him and his friend crash at my house as I live ~15 minutes from the race start. The two of them arrived Saturday afternoon and we picked up our packets and drove a chunk of the course, that which was NOT on the Falling Waters Trail. They really liked the scenery, and the course was going to be nice with gentle rolling hills among color-changing trees. When I ran this race back in 2009, it was completely along the trail, a double out and back. I didn’t mind it, because the trail is so darn pretty this time of year, but the course change made only ~10 miles of the course along the trail.
With guests in town, I decided to host a pre-race dinner (Thank you Misty!!) for Rob, Scott, Joel, and my other running partner/fellow JCC prof John Y. I thought the years of experience and fun stories of races past would help Joel get over his jitters. He said it helped. Wonderful conversation with good friends. Race morning and everything was grand. Temperature, weather, scenery, just perfect. Joel and I took off, getting into a 6:46 pace quickly. At about mile 8, we started picking it up, and by mile 12 Joel was ready to go, and off he went. I told him I would run with him for a little while until he got through the first portion, as I wanted to hold him back so he would have enough to make it. He left me behind, and I slowed down a little running 7:10ish pace miles 12-21. I had nothing to prove, and didn’t feel like busting my butt.

The course being A) in my town, B) on back roads, and C) small meant that Misty and Salacia could actually drive next to me while running. They found me along the course at several points to chit-chat and such. They even spent some time helping at one of the aid stations before heading to the finish line to see us. They are such sweet ladies…

At about mile 21, I see a familiar figure ahead of me. There is Joel, walking. Turns out, he was on pace to run a 2:55 and was in 3rd place until mile 20, then a cramp got him. I was not here for a good time, I was here for Joel, so I started walking with him, and we walked/jogged from there until the end. He was happy to finish, and enjoyed the experience, and he was quick to say he wanted to do it again. I was so happy for him to finish in such good spirits. It was so awesome to watch a first timer survive with a good attitude.
Posted by Doc Ott at 1:37 PM