Once again, I decided to start the year out with a marathon. Well, actually, a 40 mile training run with 26.2 of the miles being part of a Fat Ass Marathon. Misty and I decided to make it a couple weekend and left the house early Saturday morning and went movies hopping. After 2 pretty good movies (The Girl with the Dragon Tattoo and Young Adult) we headed to my friend Ryan’s house. He is a great friend and also happens to be the RD for this Fat Ass race. His wife Trudy joined in and the four of us went out to dinner at Applebee's then headed to a local bar for New Years festivities. Being old like we are, we left the bar at about 10:30. Headed back to their house and drank some champagne  chit-chatted until just after the ball drop in Times Square and then we all went to bed.

Ryan had to be there early as the race director, so I went in with him and while he was getting all setup, I went out and did one loop around the lake. The race was at Stoney Creek Metropark which has a nice 6 mile paved bike trail. That first loop took me a little time to get moving, but by the time I got back to the start, I felt good and ready for a long day. 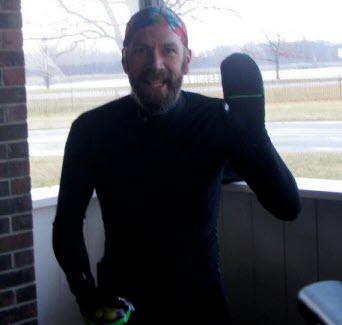 For the last 15 min or so before the start, I got to hang out with some fellow ultra runners who came this day. I knew more people at this race than most, so it was fun. Almost all the people I talked with are experienced ultra runners. All great people, actually.

My first loop of the actual marathon race was done in about 44 min, with no big surprises at all. About half way around loop 2 I was caught by Matt Antoniou, a local pizza shop owner and fellow ultra guy. In 2011, he ran his first 5K ever, and his first 150 miler too. He’s a great guy and we decided to run together for a while, which turned out to be the last ~17 miles of the race. We finished loop 2 and said Hi to our wives quick (who were both at the start/finish line) grabbed some food and headed out.

The weather, just like last year, was just weird. This year the temperatures were in the low to mid 40’s, but swirling winds (sometimes 20-25 mph) and rain on and off all day made for generally unpleasant running conditions. It could have been worse, running on snow or it being freezing rain. This being a long training run for what will surely be a tough run (Beast of Burden) in three weeks, I did not complain. The more you sweat in training, the less you bleed in battle.

In preparation for the Beast of Burden, I tested a few new ideas including food consumption while racing. Always my Achilles heel in ultras, I tried two new things to fix my stomach issues and general lack of motivation to eat. During ultras, I usually have food with me (candy bar or some such) in my pocket, but I never eat it. Its mental, so I decided that this time that when I get food at an aid station I have to CARRY the food with me. If I don’t eat it right then, it is there in my hand until I get sick of carrying it and then am forced to eat it. Its seems subtle and stupid, but ya know what? It worked. The other test was to eat fresh fruit instead of candy. One loop I ate a handful of pineapples (yum!) and another loop I ate grapes. My stomach had no issues with that, so I think I scored. Since they are not totally loaded with calories, I will have to eat them frequently. Also, I need to pig out a little more the last days before the race.

Matt and I took short walk breaks every once in a while, and I learned that even a very short walk (20 seconds) makes a difference. I came up with a new walk system. When I take a walk break, I only walk to the ‘count’ of the mile I am currently at. So, for example, if I am at mile 25, I start slowly count to 25 while walking. When I get to 25, I start running again. We slowed a little on loop 4 as we were just running for fun and taking those short walk breaks, and we decided to cross the finish line at the exact same time (we stopped and gently stepped over the line together) for my first ever ‘tie’ which was in second. We lost to Rich, another local guy who I lost this race too last year.

At the end, I ate some more food and then headed out to do yet another loop, only a little slower than the last ‘race’ loop. Once I finished that, I was at 38 mile for the day and looking at the clock, I realized that my average pace was FASTER than my average pace in my 6 hour ultra last October. For a training run, I was very pleased. 2 more miles walking to clean out the bad chemicals in my legs (it was a training run) gave me a 40 mile day that I was quite happy with.
Posted by Doc Ott at 1:18 PM