2012 Kalamazoo Marathon Results (Or: Dress Too Warm on Purpose and Help a Friend) 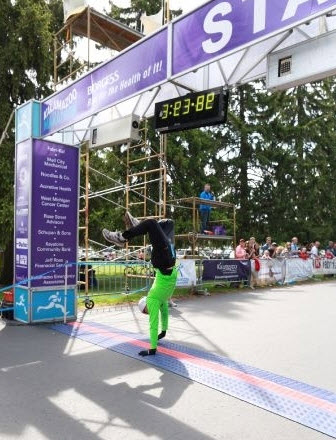 A few weeks ago, I was asked (and I accepted) to help crew an Italian runner in the 2012 Badwater 135 Ultramarathon. Running that race is on my bucket list and everyone says that if you want to get in, it really helps to have crewed/paced one before. To to start my training, I decided to run the Kalamazoo marathon wearing way too many clothes to mimic hot weather running. For a first attempt at such training, I think it worked quite well.

Misty and I decided to make a day of it in Kalamazoo and she decided o do the 5K walk while I was running the marathon. This is at least the 4th time we have done this and we both enjoy it. We left the house at 5:45 am and got to the crowded start line (Today there was a full marathon, a 1/2 marathon, a 5K run and a 5K walk) We got lucky and snuck into a good parking spot, grabbed our numbers and then I got dressed.

I wanted to be hot, and so for this first ‘test’, I wore 3 long sleeve running shirts, 2 pairs of running pants, a warm weather running cap, and gloves. It was basically the outfit I would wear if it was ~15 degrees out. Sadly, it was about 50 degrees at race start so I was not that warm at the start, but it would get uncomfortable which today was a good thing. Only a few people noticed my overdressing which is fine as I was actually trying to be subtle about it so as to answer fewer questions.

Misty and I got to the start line and while I was waiting around, I found John Y, my barefoot running friend. He was standing in socks, but had planned on ditching them right before the race. Sadly, John is moving in a few weeks and I will miss him dearly. A really nice guy who I enjoyed chatting with on long runs. After I chatted with him, I kissed my lovely wife goodbye and I moved up closer to the start looking for another friend, Brian Walsh, a runner that I met at a RUT fat ass race last fall. A graduate student at UofM and avid (and pretty good) ultra runner, he actually ran the No Wimps challenge (1/2 + 50K) last weekend like I did, so it was nice when I found him again. After chatting with him for a little while we decided to run together at the start and I figured I would play it by ‘feel’ not knowing how the extra clothes would affect me. His marathon PR is 3:39, which is slow considering what he is capable of in both shorter and longer distances. He had told me in previous conversations that he just can’t figure out the marathon distance. I decided early that I was going to try to get him to a new marathon PR so people would stop giving him grief for such a slow marathon ‘record’. I knew it would take my mind off my own heat issues and staying with him chatting for the race would make it fly by, and it did. Thats called a ‘Win-Win’. 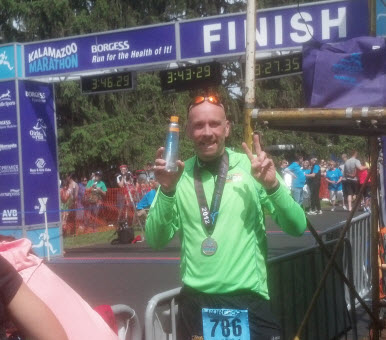 The race course fairly simple, running all through Kalamazoo area including Western Michigan University. There were a total 14 well run aid stations, each with dozens of anxious and excited volunteers. There were a few thousand runners total of all the racers, but the crowd support was as awesome as the aid stations. Always cheering, even us strangers throughout the race. I swear every intersection had 2-3 police officer/EMS/fire-fighters holding traffic for us runners. It is rare to see a city come out and support a race much more than this. Having seen too many under-supported races in my career, this was great. I helped that is was a beautiful day.
Brian and I crossed the 1/2 marathon split at about 1:37 which made Brian happy, but it was mile 20+ that he was afraid of as that is where he usually blows up. The temperature did slowly increase all day and I didn’t start feeling really ‘hot’ until about mile 17. At its worst, I think it ‘felt’ about 95 degrees in my running outfit, even though it was only ~65 degrees out. I try to learn something new every race and what I learned this race was I need to wear more clothes if I want to mimic 100+ degrees. Granted, had I wore the ‘correct’ amount for this experiment, I probably would not have been able to hang with Brian, so I guess that made it all ok.

The course contained a handful of loooong hills that all seemed to be late in the race and were of course, not fun. As we came up to one particularly long hill at about mile 21, seeing it spurred Brian to say ‘I would be ok with walking this hill’. I don’t remember exactly what I said, but it was something to the effect of ‘No’. We had slowed a little and took a little bit of time at aid stations, especially the last handful to get extra water. I ended up drinking about 2-3 more than I normally do in a marathon, and Brian drinks a lot all the time. They had water and something called ‘Gu Brew’ which is Gu’s attempt at a gatorade-style drink. I was unimpressed.

The crowds grew as we approached the finish cheering us on and we both came in faster than expected, so both our wives missed us as we crossed the finish line. I had told Misty to start looking for me around 3:30, and well, Brian’s PR is 3:39. So when we rolled in at 3:23, there were no friendly faces nearby, but they were very excited when we -did- find each other. Love all around.

A funny thing happened when I did my handstand. The timing mat (which is where I normally do it) was slippery and I failed on my first attempt. So, for the first time, I backed up 6 steps and did it again, this time with better success. There is probably no photo evidence of either attempt, but it’s the principle, damnit. 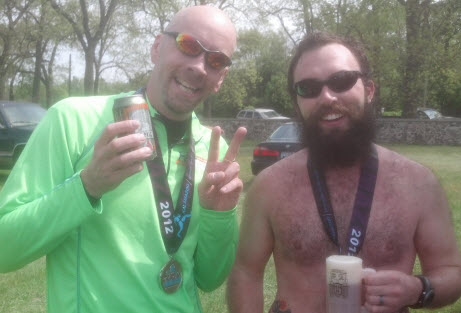 We wandered over to Brian’s car (the local beer garden) and chatted for a little while talking about the great day. Misty and I said our goodbyes and headed off but not before I was able to get a quick shower before leaving for lunch. Misty after finishing the 5K had gone back to the car, cleaned up and even took a nice nap before I even crossed the finish line. I was jealous, but it is always awesome to see her at race end.

We had a few hours yet before we got kids back, so we had a relaxed late lunch at local Applebee’s where we sat and took our sweet time eating our meal while we played pinochle, our favorite 2 person card game. It really was a great excursion with an awesome race, quality time alone with my lovely bride, and a beautiful day. I hope to run this one again, and you know how infrequently I say that…
Posted by Doc Ott at 11:40 AM